TWO OF THE HOTTEST BANDS ON ONE BILL 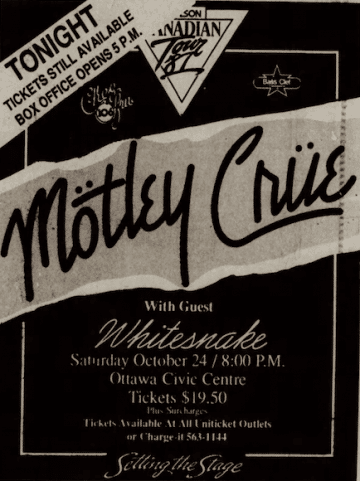 In the last 20 years you would be very hard pressed to have had one of the hottest hard rock and metal bands touring with an opening act that had just had a number one hit single. Part of the reason is of course that it is now quite rare to see a hard rock band top the charts with a number one single. Yet this is exactly what was happening back in 1987 when red hot Motley Crue were touring in support of their ‘Girls, Girls, Girls’ album and had chart toppers Whitesnake (with “Here I Go Again”) opening for them. What made the two bands’ bill also quite unique was that it attracted a large amount of females to the show — something that I had not seen up to this point at a hard rock or heavy metal concert.

I can’t remember if there was an opening act prior to Whitesnake hitting the stage but I do know that when Whitesnake, and especially frontman David Coverdale, made their entrance it did not feel like they were the opening act. That was, of course, because Whitesnake had released their self-titled album about six months prior which boasted the heavy and mesmerizing track “Still Of The Night”, but more importantly the recent number one hit single “Here I Go Again” — both in the US and in Canada. Ironically, “Here I Go Again” went number one on the Canadian Singles Chart on the day of the concert in Ottawa and the self-titled album would go on to sell over 8 million copies in the US and 5 million copies in Canada alone.

Opening with a two-song medley from their newest release, Whitesnake proved that the audience was there to see them just as much as the headliner. Although “Here I Go Again” had just hit number one, the song was played third during Whitesnake‘s unfortunately short six song set. Backed by the all-star cast of guitarists Adrian Vandenberg and Vivian Campbell, bassist Rudy Sarzo and drummer Tommy Aldridge, Coverdale could do no wrong. While it seemed that Whitesnake‘s set consisted mainly of tracks from their latest self-titled album, the reality was that some of the tracks from the ‘Whitesnake’ — namely “Here I Go Again” and “Crying In The Rain” — had actually appeared on previous Whitesnake albums but had been cleverly reworked and repackaged by Coverdale. As a relatively new metal fan at the time, that was something that I did not yet know. Whitesnake closed out their fantastic but short set with a rousing rendition of the crowd favorite “Still Of The Night”.

Motley Crue definitely had a tough act to follow but the band was also riding high on one of their four most commercially successful albums — ‘Girls, Girls, Girls’ — which coincided with a return to a harder rocking sound and “heavier” look and image with leather, jeans and strip clubs ruling the day. I had passed on seeing Motley Crue when they were touring behind their ‘Theatre Of Pain’ album — which I owned on cassette but found, and to this day, as a major disappointment to the amazing ‘Shout At The Devil’. However, this time, due to Motley Crue‘s return to form with ‘Girls, Girls, Girls’ and with red hot Whitesnake as the opening act, I elected to go to this show.

Truth be told, I had attended the concert to see Whitesnake as much — if not more — than Motley Crue. The souvenir t-shirt that I purchased (I could only afford one) once inside the venue, but prior to either band hitting the stage, was an ill-fitting Whitesnake one. However by the end of the Motley Crue set I thought that they had put on just as good of a show as the openers. The funny thing is, even though Motley Crue put on a great performance that night, I ended up waiting almost 22 years before seeing them play live again. On the other hand, I saw Whitesnake headlining just a few years later after their 1987 performance in Ottawa.

But back to the show! Motley Crue opened with “All In The Name Of…” from their latest ‘Girls, Girls, Girls’ album. The stage show seemed huge and exactly what you see in Motley Crue‘s “Wild Side” video. The band also had some good looking female singers providing background vocals — I believe only for a handful of songs. I was very pleased with the setlist given that the band mostly played songs from my two favorite Motley Crue albums at the time — five songs from ‘Girls, Girls, Girls’ and four from ‘Shout At The Devil’. This was the era of the young, slim and “fit” frontman Vince Neil — who was covering a lot of ground from one side of the stage to the other. Guitarist Mick Mars was also in much better shape, not having yet been visibly affected and worn down yet by his ankylosing spondylitis disease (a form of arthritis). This was also my first glimpse at Tommy Lee‘s rotating drum kit which was very cool and innovative at the time. Of course, Lee has now taken his moving kit to a way higher level as the years have passed — but back in 1987, just seeing his drum kit twirl around was awesome!

When I look back at the setlist that Motley Crue played that night, it was simply one great song after another. “Red Hot” and “Ten Seconds To Love” were two of my favorite Motley Crue songs at the time and both were included that night. Although I viewed ‘Theatre Of Pain’ as a disappointing record at the time — and still to this day — “Home Sweet Home” is a classic song and I was not yet sick and tired of hearing “Smokin’ In The Boys Room”.

Motley Crue‘s encores were also excellent. They played a blistering rendition of Elvis Presley‘s “Jailhouse Rock” before launching into a medley of some of the greatest rock songs out there. I am embarrassed to say that I did not know that well the snippets from two of the classic songs that the band covered that night — AC/DC‘s “Highway To Hell” and Led Zeppelin‘s “Rock And Roll” — since I was more into the latest hair metal bands at that time. Motley Crue ended their show with the awesome “Girls, Girls, Girls”, which had the audience singing along for most of the song. I left the venue elated and looking forward to attending many more concerts in the future.