NITA STRAUSS’ SOLO SHOW NOT ONLY SOUNDS GOOD BUT LOOKS GOOD TOO! 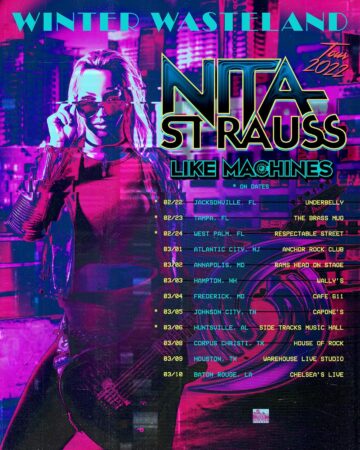 I can’t count how many times I’ve seen Nita Strauss play live, from her days with Femme Fatale to Alice Cooper concerts as well as her never ending solo dates that she packs in there before, after and in between Alice shows. This woman is full of energy and has grown as a person and as an artist since the first day I saw her play.

Don’t get me wrong, she’s always been an incredible guitarist and a great showman. One wouldn’t think she’d have anywhere to grow from there but the day she joined up with Alice Cooper, Nita Strauss changed. She appeared to become laser focused on taking positive steps and growing as an artist. We’ve all heard she stopped drinking but she also talks about her conversations with Alice Cooper about becoming the type of artist she really wanted to be. Her confidence has increased over these past years and this allows her to basically run and, figuratively, jump off the cliff during every show. 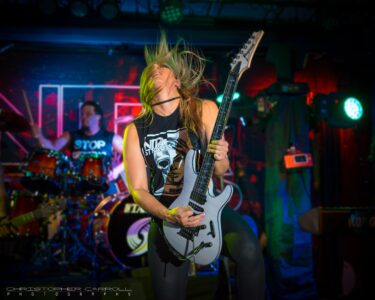 I recently saw a video of Nita running, slipping and falling onstage a couple times during an Alice Cooper show and I was kind of annoyed to see it because this is a woman who puts it all out there onstage. She does take chances. She doesn’t just step off the riser when her solo is finished, this woman JUMPS in the air backward and SPINS mid-air while leaving the riser! Slipping on soap from the bubble machine while she’s sprinting full force across the stage is the last thing that shows the artist that Nita Strauss really is.

Nita hit the stage tonight with a vehemence that lasted the entire show. She never lets up. She never slows down and she never gets tired. Even more impressive is the fact that her playing is so on point and impressive and that she now pulls this off while performing at 100, one handed, guitar upside down, behind her back and even upside down WHILE behind her back! She’s nothing short of extraordinary which makes it pretty easy to see why former Alice Cooper bassist, Kip Winger, pulled out his cell phone, after seeing her play the first time, with Femme Fatale, on the Monsters of Rock Cruise, 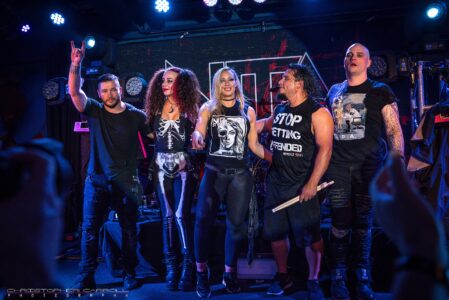 called Alice and said, “Hey… I’ve got the girl for you” [I’m paraphrasing, I wasn’t included on that call but that’s basically what he has said in interviews].

Nita and her band played perfectly tonight, as they always do. Clearly, her first step in putting a solo band together was finding players who have mastered their craft. She showed one off, last night, when the band broke into a cover of Alice Cooper‘s “Feed My Frankenstein” which was sung by her best friend, keyboard virtuoso who also studied voice at Berklee College of Music, and former Femme Fatale alumna — Katt Scarlett. She performed it beautifully. Katt has such a sultry look while playing that I sometimes feel like I’m watching a tennis match at these shows, looking to the left at Nita, then to the right at Katt, back to the left, back to the right. They both have an onstage charisma that adds to the show. Everyone in the band plays with expert precision. These are all top notch players. 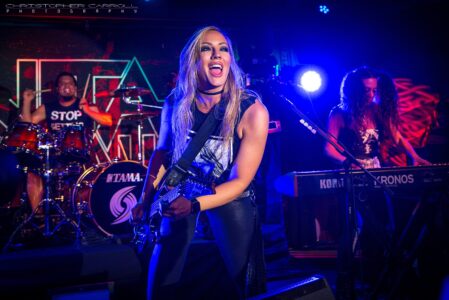 Nita goes to more trouble than most to make sure her solo shows not only sound good but look good! You can see that in the stage design but most notably, in the lighting. Most clubs have their own lights but many that are smaller, don’t even have a spotlight. That makes for horrible photos! Nita brings her own spotlight (and, I believe the LED trees that were onstage, are ones that she brought, as well)! This gives the performance a much more professional look and I, being a photographer, appreciate that. It actually connects the artist with the crowd instead of making them seem so far away and detached.

As always, the night went by too fast and the show was over too soon… but today is Wednesday and I’ll be traveling to see them again on Friday! Nita has a few more dates to close out her Winter Wasteland Solo Tour. She will play a few dates with Alice Cooper and then jump right back on the road to join Black Label Society along with Jared James Nichols! Check the tour page on Nita Strauss‘ website for all scheduled dates for these tours.