ONE DESIRE DEBUT SONGS FROM THE UPCOMING SECOND ALBUM 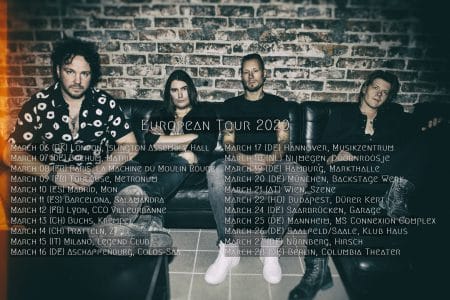 One Desire’s debut album is exceptional when it comes to a perfect combination of music between now and then. It’s catchy, memorable, heavy and very well produced. It was definitely one of the best records in 2017, so I was really excited to finally see them live, especially because it would be their very first date from their European Tour, this time as opening act for Swedish supergroup Night Flight Orchestra. On February 26th, the Finnish band released a brand new song named “After You’re Gone.” It was clear for most people’s reaction on social media and forums that One Desire had found a very special and personal signature. The competition out there is pretty wild, so One Desire have put themselves out as a frontrunner with that single.

Islington Assembly Hall is one of my favourites venues in London, and surely is the perfect one for One Desire to engage with an audience and perform under a decent sound quality. Despite tiny problems with the latter, the set went very well. A new one blew out the PAs with no shame indeed. “Shadowman” had its debut in front of a few and lucky people, but by the end of that, lots more fans came together and made the boys feel much welcomed. André Linman is a great frontman and guitar player. The track “Apologize” proved it, showing a much heavier version than that on the album. You could see some notorious head banging all over the place and singing along from audience members. Maybe One Desire should had played another one from their self-titled album to keep that atmosphere going, but instead, they decided to another new song. “Down And Dirty” in particular was amazing and Linman justified its inclusion by stating: “You guys are the very first ones to hear and see these new tunes live!”

Seconds later, we were getting emotional with “This Is Where the Heartbreak Begins.” Damn! What a great song! Lyrically, it’s not over the top, but it’s so passionate and well executed. I was very surprised by seeing André playing the guitar solo. I really thought it was Jimmy Westerlund on the album. And then came the already mentioned “After You’re Gone.” It was impressive how seemingly everyone knew its lyrics by heart. Drummer Ossi Sivula put on a great performance on that one!

“You might know this one”, said Linman right before “Hurt” which is probably One Desire‘s most well known song. In fact, it defines One Desire, and it’s absolutely impossible not to sing along to, including Jimmy’s brilliant guitar solo. Neal Schon would be proud! Two more from tracks from 2017 followed. “Whenever I’m Dreaming” and the Dynazty like “Buried Alive” put an end to one of the coolest gigs I’ve ever seen in London.

One Desire performing “After You’re Gone” live at the Islington Academy Hall in London, UK on March 6, 2020: