After seeing Opeth live for the first time back in October ’16 at Massey Hall in Toronto, Ontario, Canada and being thoroughly blown away, I just couldn’t pass up on the opportunity to see them again now that I’m in Mexico. Teatro Metropolitan is a 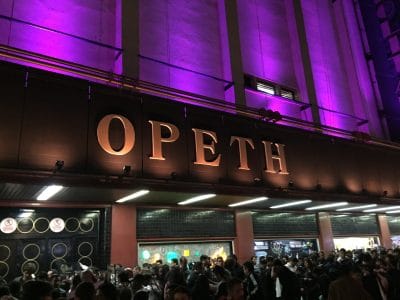 classic venue in Mexico City, located right downtown. It was first built as a movie theater during the ’40s and later on renovated as a venue for shows during the ’90s. The building is one of the few art deco buildings of the City. I got there early and walked for about an hour or so around downtown in the Alameda Central seeing all the beautiful classic buildings and monuments there including Bellas Artes (you should Google that and come visit Mexico City if you haven’t already because it is AMAZING). I then headed for the venue which is about eight blocks from there.

I already knew the show had been sold out and it showed, there was a huge crowd outside. A lot of people trying to get tickets with the scalpers and the classic bootleggers selling t-shirts, cups, pens, stamps, and any kind of shit that can be branded with the band’s logo. These people are at most concerts in South America. Illegal as it may be, you can get ultra-decent t-shirts for a fraction of the price of the official merchandise inside. 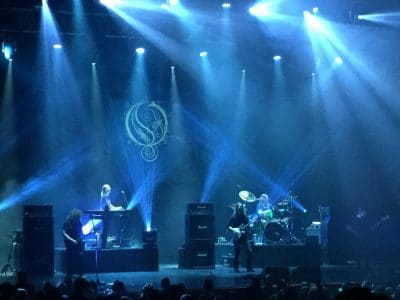 With no opening act necessary, the band started its show with the title song “Sorceress” from the new album and then went back to the “old shit” and never looked back. All of the Opeth standards like “Demon Of The Fall,” “Ghost Of Perdition,” “The Devil’s Orchard” and my personal favorite “The Drapery Falls” were included on the setlist, which made it perfect for the crowd that only wanted to see them play certain songs.

As a result, unlike the Toronto show at Massey Hall back in October, Mexico City’s show was a dream come true for fans of the band’s old stuff. Honestly, I was slightly taken by surprise because I expected a lot more from the new album. which I really like (naming it one of my top albums for 2016). I especially enjoy how well the recent more progressive songs mix with the old heavier ones when they are performed live.

In the end, I love all the older songs too, so the lack of more recent stuff was forgivable and, in my case, since I already saw “the 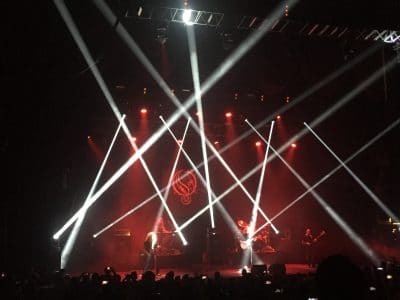 other” setlist in Toronto, less aggravating. Still, I believe more songs from the recent albums would have made the show more dynamic. I know I wasn’t alone with this way of thinking because I got to talk with the very nice dude sitting next to me and he was also expecting a lot more from Sorceress.

This little detail notwithstanding, Opeth have what it takes and they have proven this time and time again, especially when it comes to their live performances. The band was as tight as ever and as always Mikael Akerfeldt handled the crowds with wit and humor during the intervals joking about his name being “Miguelito” (little-Michael in Spanish) and even surprised the audience with a super amazing medley of songs picked from whatever titles the crowd was screaming at him.

All in all, it was another great show from Opeth. The place was packed and the crowd really into everything they were playing. They did play it safe with the setlist but who can blame a band for performing only their well-beloved classics? 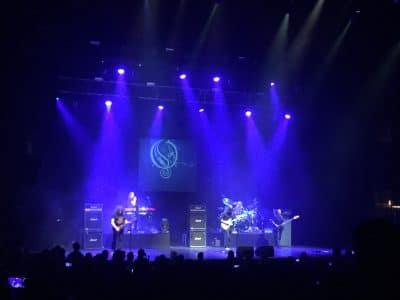 01. Sorceress
02. Ghost of Perdition
03. Demon of the Fall
04. The Wilde Flowers
05. Face of Melinda
06. In My Time of Need
07. The Devil’s Orchard
08. Cusp of Eternity
09. Heir Apparent
10. Bleak/Hope Leaves/Avent/Porcelain Heart / The Moor / Burden / Harvest (medley performed as a part of song requests by the audience)
11. The Drapery Falls
Encore:
12. Deliverance