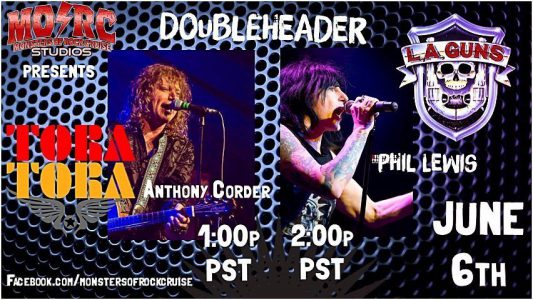 Although I appreciate all the bands and artists putting on virtual performances in the last few months, the reality is that it’s just not the same and it’s hard to get up for these types of performances. Funny enough, I wasn’t going to tune into the Monsters of Rock Cruise‘s double virtual live header of Phil Lewis (L.A. Guns feat. Lewis and Guns) and Anthony Corder (Tora Tora) as I was going to be out at the time. However, I noticed a Facebook post from my friend / professional photographer Joe Schaeffer that indicated that Lewis‘ performance was still available for viewing. Seeing as this was the case and intrigued by Lewis‘ new look with his long old school moustache, I decided to check his set out.

Lewis immediately had my attention by opening with one of my favourite L.A. Guns songs — “Long Time Dead” — and even though his acoustic version was pretty different from the version that I had in my mind from L.A. Guns‘ Live: A Nite On The Strip, it was still very enjoyable to hear. Further incentive to stick around for all of Lewis‘ set was when the singer indicated that he would be playing a lot of rarely played L.A. Guns tracks including some from Hollywood Forever. It was cool to see how passionate that Lewis was about playing live as he noted that it was great to get out of the house and that he would be willing to virtually play any kind of gig at this point. It was also interesting to hear Lewis play some songs from the albums Tales From The Strip and Hollywood Forever given that I believe that the singer indicated at one point in the last few years that any album that didn’t have Tracii Guns and himself on it was not a true L.A. Guns album. 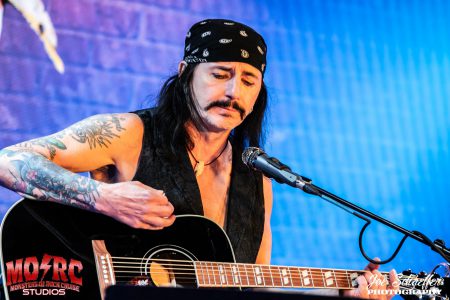 True to his word, Lewis started delving in older rarely played L.A. Guns material as the second song played was “My Koo Ka Choo” from the underrated album Hollywood Vampires. Although I am not a big fan of artists changing songs in a live setting, Lewis‘ renditions of “Long Time Dead” and “Sex Action” were very enjoyable. The rarely played tracks kept coming with a double shot from Hollywood Forever with “Sweet Mystery” and “You Better Not Love Me.” For the latter, Lewis pointed out that he had done a search and L.A. Guns‘ “You Better Not Love Me” was the only song in the entire world with that title. Apparently, that’s not an easy feat to do these days!

Two things struck me while listening to Lewis perform his acoustic set. First of all, Lewis really has a great voice that can really carry a song. There is no doubt that the man has some great vocal pipes and that he has done a good job preserving them over the years. Second of all, it was really fun to hear these rarely played L.A. Guns tracks and it reminded me what a vast catalog of great songs that L.A. Guns truly possess. I was also impressed that Lewis was donating any “tips” that he received for his performance to Kitten Rescue. Three months without any gigs of any kind can’t be easy financially for any musician but here was Lewis putting a charity first. He did mention that he would keep the profits from any merch sales.

As previously mentioned, I loved that Lewis played so many rarely played L.A. Guns tracks. Overall, the ended up playing one song from L.A. Guns (1988), two — you know which ones — from Cocked And Loaded (1989), four from Hollywood Vampires (1991), one from Vicious Circle (1994), one from Man In The Moon (2001), one from Tales From The Strip (2005) and two from Hollywood Forever (2012). My favorite song from Lewis‘ set was “Beautiful” from the album Man In The Moon. Wow! I had forgotten how great that song was. It would be great to have Lewis or his version of L.A. Guns release an acoustic album with those tracks. I suppose that the songs from Tales From The Strip and Hollywood Forever would sadly be omitted though if Tracii Guns was a part of that album.

As an extra bonus and also in a separate Facebook message on the Monsters of Rock Cruise Facebook page, Lewis announced that his version of L.A. Guns would be doing a virtual set via Monsters of Rock Cruise on June 20, 2020 at 1:00 pm PST. Lewis noted that it would only cost $10.00 and that it would be the best $10.00 that anyone would ever spend. Clearly, this is a virtual performance worth checking out. Hopefully, Lewis will get his L.A. Guns bandmates to play some more rarely 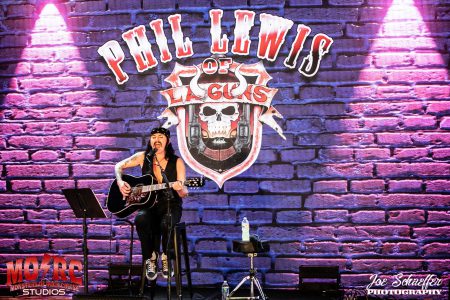 played L.A. Guns cuts. A big thank you has to be given to Monsters of Rock Cruise for hosting all of these virtual live performances from their “studios.”