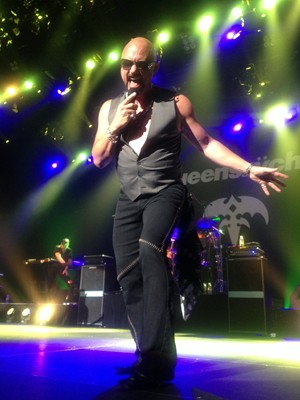 There is no question that Queensryche‘s legacy has been tarnished in the last year or so with Geoff Tate getting fired — resulting in two Queensryche bands co-existing for the time being a la L.A. Guns. Whether Geoff Tate, backed by an ever revolving list of musicians, or the trio of Michael Wilton, Eddie Jackson, Scott Rockenfield along with guitarist Parker Lundgren and new vocalist Todd La Torre should be considered the real Queensryche — that fans have followed since the early ’80s — will ultimately be decided by a U.S. court likely in November of this year. One can certainly understand why both sides want to hold on to the Queensryche brand given that it would be a lot harder to start over building a new name and legacy from scratch.

To make matters worse, Queensryche has not released anything really good since ‘Empire’, and perhaps ‘Promised Land’. 2006’s ‘Operation: Mindcrime II’ was an alright attempt at recapturing the band’s former sound and glory, however the two albums that followed were quite disappointing. The concept album ‘American Soldier’ — while tackling worthy and interesting subjects — was for the most part a dull one and the subsequent release, ‘Dedicated To Chaos’, was exactly that — chaos to any listener’s ears. After that very disappointing album I have had to apply a new rule of always listening to a few songs prior to purchasing any Queensryche release. Geoff Tate was the first out of the gates among the two bands with his ‘Frequency Unknown’ CD. Putting aside the mostly bad reviews for that CD, I was not impressed with the two tracks that I have heard thus far — “Cold” and “The Weight Of The World”. 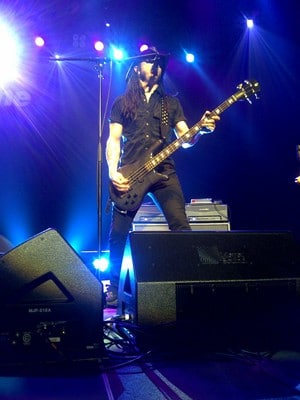 It is on that basis that I pondered whether to attend the upcoming show from the Queensryche “band” featuring Geoff Tate at Casino Rama. If Tate was going to be plugging his latest ‘Frequency Unknown’ album, I would not have been in attendance. However, given that the singer had decided to celebrate the 25 year anniversary of ‘Operation: Mindcrime’, by playing the entire CD, and after a quick review of the set list from past shows on the tour, I decided to attend. I am glad that I did because Tate and company put on one great show from start to finish.

A few words about the venue Casino Rama have to be said to give you, the reader, a good feel of the atmosphere at the show. Casino Rama’s Entertainment Centre boasts a spectacular and huge stage for the size of the venue. The acoustics and sound are excellent and like most modern facilities, every concert goer obtains an assigned seat. However, unlike many venues, concert attendees can flock to the front of the stage despite their assigned seating. Unfortunately Casino Rama often gives away free concert tickets to its casino patrons, and although there was a large crowd on hand to see Geoff Tate and company, you have to wonder how many people in the audience actually knew Queensryche — especially since most of the seated crowd sat on their chairs for the entire show and certain audience members looked like they did not belong. For instance, I saw one very elderly couple with the man dressed in a white suit, and at one point during the show Tate questioned whether the crowd knew that the band they were seeing was Queensryche.

Prior to Queensryche hitting the stage, Canadian icon Sass Jordan came out from the curtains and onto center stage with a fellow named ‘Derek’ who was armed with an acoustic guitar. Jordan was scheduled to play the part of Sister Mary in the Queensryche show and it was a real treat to see her play a few songs beforehand. Both Jordan and her guitarist sidekick were all smiles as they belted into a bluesy country-like number to start off their five song acoustic set. It must have been a bit intimidating playing to the crowd given that everyone was politely seated in their seats and you could hear very little noise emanating from the crowd. Sass Jordan even pointed this out when she mentioned how odd it was to be playing an acoustic set before a Queensryche audience. Nevertheless, it worked out well. The 50 year old singer looked fantastic with her long flowing blond hair and appeared much younger than her age — at least from afar — and what a voice! Age does not seem to have diminished her vocal capabilities in the least. Given that it was an acoustic set, the emphasis was on her vocals and she simply shined in that regard. The second song played was “I’m The One” from her new band S.U.N. (Something Unto Nothing). Each song seemed to get a bigger and bigger reaction from the crowd that continued to sit on their chairs (including myself) — there were only two people standing next to the stage. It has been a while since I heard Sass Jordan‘s back catalog of songs but it seemed that she played “You Don’t Have To Remind Me” as the third song. Next up was a spirited version of “High Road Easy” which seemed to perk up the seated crowd — but not from their seats. Jordan closed off her quick set with the always awesome, and likely her biggest hit, “Make You A Believer”. It was my first time seeing Sass Jordan live and it won’t be my last — especially if S.U.N. starts touring. If so, hopefully they will throw in a few Sass Jordan hits in their repertoire because her harder and biggest hits would fit in quite well with the rest of the S.U.N. material. 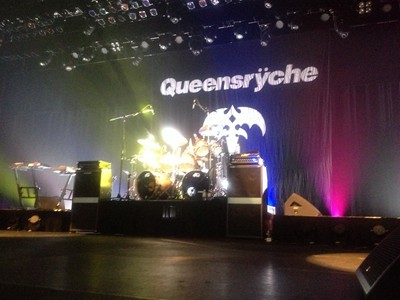 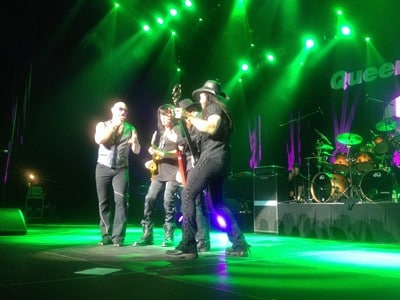 A short while later Queensryche took the stage, with Geoff Tate only appearing when he had to sing the first few words of “Revolution Calling”. The band did a good job of utilizing the entire stage and kept playing continuously for at least half of the ‘Operation: Mindcrime’ songs without Tate really addressing the crowd that much. Sass Jordan eventually returned for “Suite Sister Mary” and it was a real treat to have two of the best vocalists out there performing together. Tate, just like Jordan, has been able to keep his vocal pipes at an optimum and powerful range despite over thirty years of singing. The show really seemed to take off for me when the band cranked out “The Needle Lies”. The next few songs, such as “Breaking The Silence”, “I Don’t Believe In Love” and “Eyes Of A Stranger”, were also well received and provided sing along opportunities for the crowd.

Unlike some earlier reports that Geoff Tate was misbehaving and acting like a jerk, such as the time he took a fan’s cell phone and tossed it into the audience, I did not see any of that. In fact, Tate was quite charming and was joking around with the crowd — particularly during the encore segment of the show. He also seemed to be very appreciative of everyone there and did not criticize most of the audience which was simply sitting in their seats for the entire show until the last encore. The five songs played during the encore were all fantastic with four of them coming from ‘Empire’ — Queensryche‘s best CD in my opinion. “Silent Lucidity” was of course followed by the inspiring and fantastic “Best I Can”. Next up was “I’m American” from ‘Operation: Mindcrime II’ which Tate renamed “I’m Canadian” — not very original, but an easy way to get a “pop” from the crowd. Queensryche closed off their show with “Jet City Woman” and probably the band’s best song, “Empire”. It might be because I was one of the people standing close to the stage, but I thought that the show put on by Geoff Tate and his bandmates was fantastic. Most of the audience was sitting in their seats during the entire show until Tate told them halfway through “Empire” that this was their last chance to stand up, which most eventually did. I wonder what those people thought of the show…

After the show, I could not help but ponder and conclude that I had seen the legitimate Queensryche band. Just like Axl Rose is carrying on the Guns N’ Roses legacy all by himself without his former bandmates from the band’s classic period, Geoff Tate is now doing the same with Queensryche. Rightly or wrongly, it is usually the vocalist who is the face of the band and the key to their sound. Perhaps two of the only exceptions would be Van Halen and Black Sabbath, who both possess guitarists that emanate very identifiable sounds. Queensryche without the voice behind it — namely Geoff Tate — is simply not Queensryche. 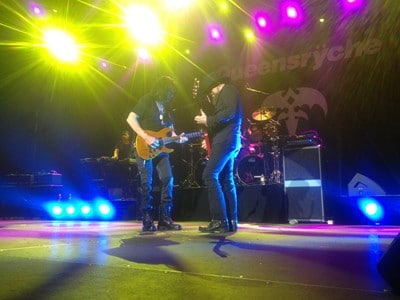 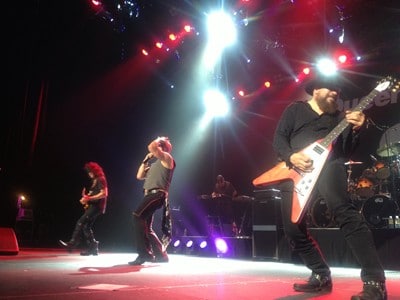