Before I get to my concert review for Queensrÿche‘s show at Wooly’s in Des Moines, Iowa, I need to get something off my chest. I have read too many interviews and concert reviews lately that still refer to Todd La Torre as the new singer of Queensrÿche. I think it’s time to give Todd the respect he so rightly deserves. He has two albums under his belt and four years with the band. I truly believe people should start referring to him as “The Singer” of Queensrÿche, NOT the new singer. Now I know some will argue that Geoff Tate is the true voice of the band and I have the utmost respect for his vocal skills, but he is no longer with the band. I believe Todd has proven through his singing, writing and his great chemistry with the band, that he does deserve that title. Now onto the show. 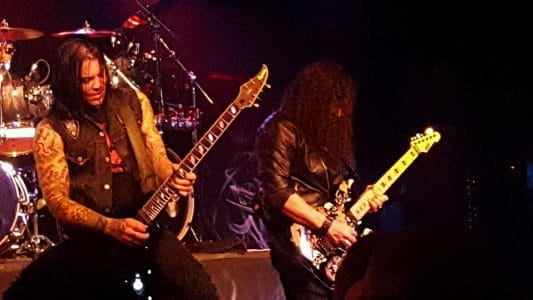 My first thought walking into Wooly’s was “this is a cool, intimate venue.” It holds about 300 people, which is perfect to see bands up close and personal. My only worry was that the sound might suck because of the size and the age of the building. After hearing the two opening bands, I put those worries aside. They kept the volume at a nice level. Loud enough to know you’re at a concert, but not too loud to distort the sound and make your ears bleed.

Queensrÿche‘s set list didn’t change much since the last time I saw them in January. They once again came out during Scott Rockenfield‘s drum into while the big screen introduced each band member one by one. This is when I really noticed how small the stage was. That last time I saw them, they had two large video screens on stage, this time there was only room for one. 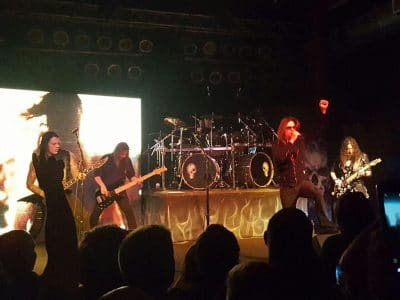 The band didn’t skip a beat and went into “Guardian” off of Condition Hüman. Next up, they took it back to the classic albums by playing “Operation:Mindcrime”, “Best I Can”, “Damaged”, “The Killing Words” and “The Mission.” They played two more songs off the new album — “Bulletproof” and “Eye9” — the latter of which bass intro was slayed by Eddie Jackson. They also snuck in the song “In This Light” off of the 2013 self-titled album. The rest of the night was filled with classic songs including “Queen Of The Reich”, “Jet City Woman” and “Take Hold Of The Flame” with Michael Wilton and Parker Lundgren keeping the night alive with blazing guitar solos.

They left the stage, but the crowd wasn’t ready to go anywhere, chanting “Queensrÿche” until the band again stepped onto the stage and closed the show with “Screaming In Digital” and “Eyes Of A Stranger.” The band came to the front of the stage for a final bow and left the fans completely satisfied.