As a teenager, I grew up in a small town in northern Minnesota. If a band didn’t have a song on the radio, it was hard to find out if they were good enough and worthy enough to spend your hard earned lawn mowing and allowance money on their music. Sure, there were magazines like Circus, Metal Edge, Hit Parader, along with many others, but pictures and articles weren’t always enough to form an opinion. Queensrÿche was one of those bands for me. I had seen a few videos of theirs while waiting for my favorites from Mötley Crüe, Poison and Def Leppard, to name a few. I think I mostly skipped over their videos because they had a little different sound and lyric content than the party bands I was listening to at the time. Then “Silent Lucidity” hit the radio while I was in college. It intrigued me enough to finally check these guys out. I reluctantly bought Empire and much to my surprise, I couldn’t get enough of it. I don’t think I listened to much else for the following few weeks. Finally on May 7th, one day after my 20th birthday, Queensrÿche was to play in Duluth, Minnesota on their “Building Empires Tour.” They also played Operation: Mindcrime in its entirety on that tour. After seeing them live, I couldn’t get enough and finally started to work my way backwards through their albums and found out all the music I had been missing out on. Now it’s 2016 and it marks the seventh time I have seen this great band live and it just happened to be Eddie Jackson‘s 55th birthday. My wife, a group of friends and I were lucky enough to be his guests for the evening.

The night started out with opening act, Halcyon Way, hitting the stage. I had never heard of them before, but elected to give them a chance to win me over. They had a great sound, and were entertaining to watch, but their songs all sounded the same to me.  They were followed by the new band Meytal, named after Meytal Cohan, a female drummer from Israel. Eric Emery on vocals, Doc Coyle (formerly of God Forbid) on rhythm guitar, Travis Montgomery (Threat Signal) on lead guitar and Anel Orantes Pedrero on bass. Meytal‘s progressive metal sound was enjoyable and it was fun to watch the female rhythm section during their set. They were both smiling and energetic for the whole show. The highlight for me was when they broke into “Pull Me Under” by the great band Dream Theater and they performed it pretty much spot on. 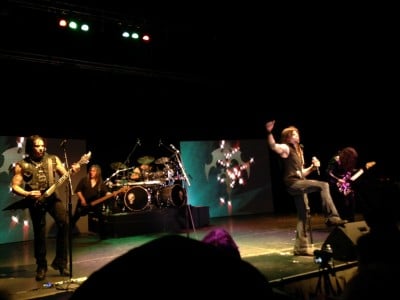 Finally, it was time for what everyone was waiting for. The lights went out and two giant video screens lit up with a vintage Queensrÿche logo. Scott Rockenfield climbed behind his kit with a strobe light on his head and started to throw down a kick ass drum beat. One by one, the video screens introduced the band members. First, Rockenfield followed by guitarists Michael “Whip” Wilton and Parker Lundgren, bassist Eddie “EdBass” Jackson and last, but not least, the breath of fresh air, Todd LaTorre on vocals.

“Guardian” from the new album Condition Hüman kicked off the setlist and set the tone for the night. They were going to kick our asses for the next 90 minutes and they proceeded to do just that. Even though it was a new set list, they stuck mostly to the classic 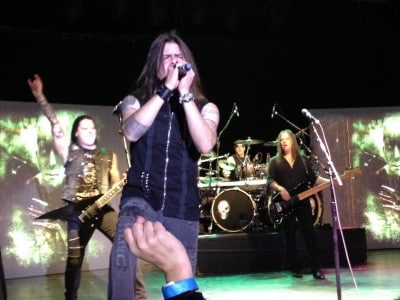 albums and the two newest releases, but dug up a few deep tracks to satisfy the true Queensrÿche fans. I was happy to hear many on my favorites, like “Best I Can”, “The Killing Words”, “The Mission”, “In This Light” and “Screaming In Digital”. The set list also included many standards too such as “Empire”, “Jet City Woman”, “Queen Of The Reich” and “Take Hold of the Flame.” They made the most of the video screens with clips of their music videos, the classic concert video from Operation: Mindcrime along with very cool images and special effects. Another new song “Bulletproof” was well received by the fans and sounded even better live. The highlight of the night was when they brought out a birthday cake for Eddie and the crowd serenaded him with “Happy Birthday.” They ended their encore with the classic “Eyes of a Stranger” and after the band left the stage for the night, I felt 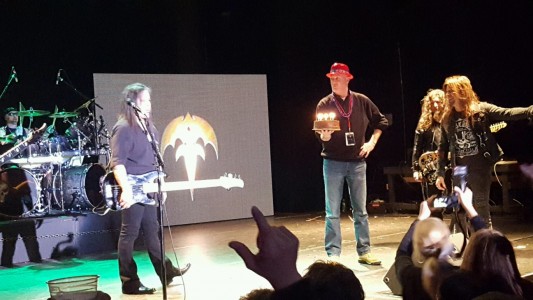 very satisfied with the show, but you always seem to think back and say to yourself, “they should have played this,” “they should have taken this song out and put this one in.” All you can do is go and see them the next time they come to your area and cross your fingers and hope they add those songs to the setlist.

After the show, we had a nice little visit with Eddie, Todd and Michael. Eddie then joined us at the casino bar for some birthday drinks and pleasant conversations. We discussed some sports, especially since I’m a Minnesota Vikings fan and Eddie, a Seattle Seahawks fan, and our teams had played in the playoffs just a few weeks earlier. The Seahawks lucked out with the win due to a missed field goal in the last seconds of the game. My friends and I also gave our opinions on what songs needed to be added to Queensrÿche‘s next setlist, but we’ll have to wait until the next tour to see how persuasive we were. Finally, Eddie shared some great tour stories from the past, involving members of KISS, Metallica and a few others, but that’s a story for another time and best heard from Eddie‘s mouth.