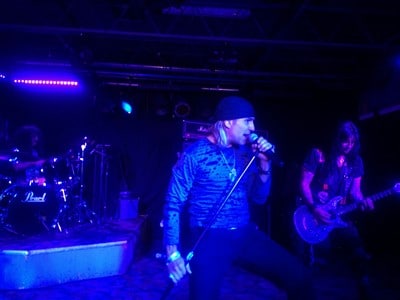 The clocks turned back 25 to 30 years when Quiet Riot recently stopped by to play in Toronto. Armed with a set filled only with songs from their three most popular albums — 1983’s ‘Metal Health’, 1984’s ‘Condition Critical’ and 1986’s ‘QR III’ — Quiet Riot had no issues with only playing a greatest hits type set. Luckily for the band, neither did the crowd — which was probably one of the largest that I had ever seen at the Rockpile.

Although doors opened at 8:00 pm, I only got to the venue at around 10:00 pm so I am not sure whether I missed any opening bands — but I suspect that I didn’t. First up was Revolution — a band comprised of four “kids” with ages ranging from 15 to 17. Their songs were pretty good on a first listen, however what stood out immediately was how talented the band’s guitarist Jamie Bekyarovich was. Holy shit, that young man can play! Ironically enough, even before the band launched into their second last song — a cover of the Ozzy Osbourne classic “I Don’t Know” — I was thinking that I was seeing a new younger version of Randy Rhoads, oozing with talent and potential — but also due to his long hair and skinny frame. How fitting for the evening than that Revolution would cover that Randy Rhoads classic! While there is no question that guitarist Bekyarovich has tons of talent, the band still likely needs some work to get their songs to blend in more smoothly with the guitarist’s talented playing. Lead vocalist Tyler Watkins was surprisingly quite comfortable at engaging the crowd and very good at driving the band’s name into people’s psyches. Yes… I fully understand that the band is called Revolution! At the end of the day, Revolution put in a good performance and the fact that the band members were up on stage rocking away at their tender ages was very impressive. They are definitely a band to watch in the future — particularly guitarist Jamie Bekyarovich.

Next up was Crooked Zebras — funky name. A quick check of the band on YouTube prior to the show revealed a very good covers band. The clip that I viewed certainly did not do justice to Crooked Zebras because the band was simply electric and full of energy on stage while cranking what appeared to be a few originals mixed with an eclectic mix — but good choice — of covers. Throw in a large crowd of Crooked Zebras supporters, with mostly all of them donning band t-shirts, and you had a very excited crowd for a relatively unknown support band. Crooked Zebras‘ originals fit quite nicely — and were almost as well received — as their cover songs, which included the classics “Hard Day’s Night” from The Beatles, “Rebel Yell” from Billy Idol and “Ain’t Talkin’ ‘Bout Love” from Van Halen. The band finished their set with a really good rendition of Alice In Chains‘ “Man In The Box”. 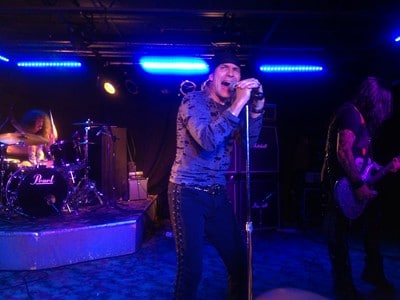 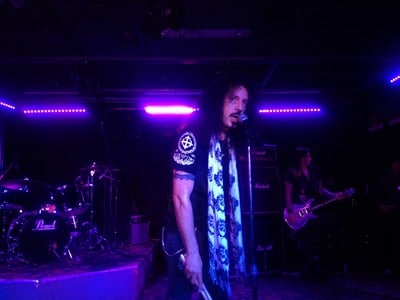 A short time after, the legendary Quiet Riot strolled onto the stage and launched into “Run For Cover”. Sadly, the band has gone through numerous personnel changes, including being on their third lead vocalist since frontman Kevin DuBrow passed away back in 2007. Only drummer Frankie Banali remains from Quiet Riot‘s most popular line-up, which also included guitarist Carlos Cavazo and bassist Rudy Sarzo. That being said, bassist Chuck Wright has played on and off in Quiet Riot for a total of about eleven years while guitarist Alex Grossi has been in the band for a total of around five years. Wright has likely been, overall, in the band longer than Sarzo, and an argument could be made that he embodies the spirit of Quiet Riot more than the latter. At the end of the day, it helps that new lead vocalist Scott Vokoun sounds a lot like DuBrow which helps to make you forget that controversial frontman is no longer there. Vokoun‘s smile and enthusiasm also helps to forget about DuBrow and focus on the great ’80s era tunes that the band has to offer. In fact, all of the band members seemed happy to be there except for Banali, who seemed not to crack any sort of smile during the entire night. Vokoun was very gracious, quickly complimenting the venue with a, “You got a great club here,” and he did not seem that upset with the microphone issues that plagued him during a few songs throughout the night.

All of the Quiet Riot staples were played including the two Slade covers “Mama Weer All Crazee Now” and “Cum On Feel The Noize” alongside the stellar ballad “Thunderbird”. The band certainly knows which album put them on the map given that a whopping eight songs were played from ‘Metal Health’ — ranging from all the hits to lesser known tracks such as “Breathless”. I am not complaining because it is a great album and there are really no bad tunes on that one. A poignant moment during the show was when Banali came to center stage to address the crowd and dedicate “Thunderbird” to his deceased comrades and bandmates Rhoads and DuBrow. ‘Condition Critical’ was not as well represented with only three tracks from that album, which included “Sign Of The Times” and the title track — I must say that I was disappointed not to hear “Party All Night”. Rounding off the set list was “The Wild And The Young” and “Put Up Or Shut Up” from ‘QR III’. Quiet Riot closed out their show with a rousing rendition of the classic “Metal Health (Bang Your Head)”.

At the end of the day Quiet Riot put on a good show. However, one wonders how long that Quiet Riot can continue touring while playing the same ’80s era songs over and over again. Based on the crowd reaction at the Rockpile, my guess is that they could easily do so for at least another 10 years. 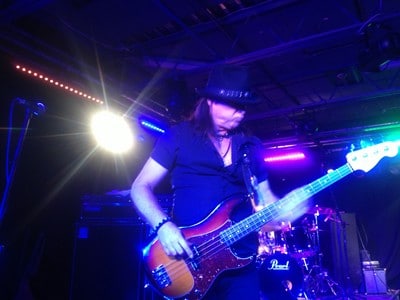