A few months back, two months ago to the day, I went to see a band I’ve been listening to for 30 years and never had seen live when I saw Kix. Last month, I saw L.A. Guns who I had seen a million times (and hope to see a million more). But, this time, I finally got to see Quiet Riot in concert. Yes, after all these years and all the times I’ve heard their hits, I had never seen them in concert until now. I had tickets to see them in 2003 at a famous hole in the wall rock bar here in the Phoenix area called the Mason Jar. But, the band broke up about a month before the concert and I was partially — yes partially — refunded. As I mentioned in a Facebook post that Frankie Banali actually liked, the band is completely different now. Carlos Cavazo is now 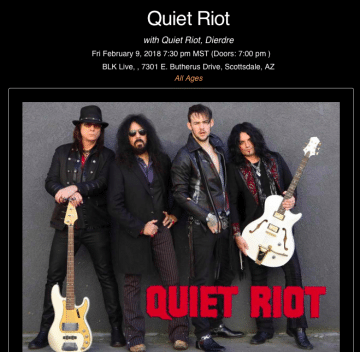 with Ratt while Rudy Sarzo does what he wants when he wants. Kevin DuBrow, as everyone knows, left us in 2007. So, only one of the most iconic version of the Quiet Riot band still is in the band. A whole lot has changed in the Quiet Riot band indeed. But, my enthusiasm about seeing them live has not changed at all.

The current Quiet Riot line-up consists of the final Quiet Riot line-up that toured with Kevin DuBrow. This line-up also made the criminally underrated Rehab album. It consists of Alex Grossi on guitars and Chuck Wright on bass with, of course, Frankie Banali on drums. Laying the vocals down now is American Idol famed James Durbin. Now, some may see the American Idol thing and crap all over it. But, I view myself as a high judge of character and I liked Durbin from moment one on that show. His love of rock and roll is not questionable if you give him the chance. Plus, he is a known wrestling fanatic, which certainly endeared him to me even further. In fact, my hero Hulk Hogan appeared on American Idol because of Durbin‘s love of wrestling and the Hulkster threw his Impact Wrestling merchandised shirt at Durbin after ripping it off. That shirt — a non-ripped version of course — is what I wore to the show on Friday night. And, from James Durbin himself, I got a “nice T shirt, brother!” during a banter segment with the crowd. So, that was the desired result. And, I got it. So, yay me!

Truth be told, I’d have gone to see James Durbin without Quiet Riot if he came to town just as I would have seen Quiet Riot with a different singer, assuming that singer was any good. The match of the two groups I’m a fan of just makes sense. And, I’m so glad this ended up being the line-up for this band because I truthfully would have trouble believing many other configurations of this band would feel as legitimate as the current one does. 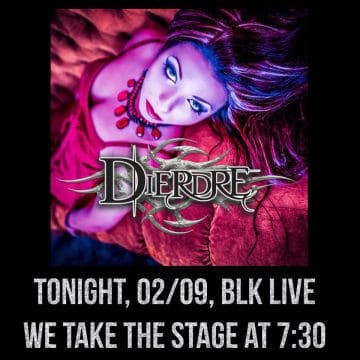 Before I go over the show, I wanted to mention when I arrived and such. I also wanted to note that I wanted to wait a few days so I did not come off as reviewing the show like SpongeBob Squarepants telling Squidward about when Santa arrived breathlessly. I find some of the reviews I read online come off that way, or at least that is how I view them. I arrived at about 8 o’clock just in time to see the female fronted band Dierdre leave the stage. From what I heard, and it wasn’t much, they sounded like more modern hard rock. Again, I did not hear much but she had a pretty good voice and wasn’t hard on the eyes either. Can I say that anymore in the days of the “and me” and “time’s up” movements?

The venue was mostly filled though nowhere near as insane as it was for the L.A. Guns concert a few weeks back. I was able to get within about four rows of people from the stage. That was not at all the case for L.A. Guns. But, I did arrive about a half hour earlier for this one for that very reason. So, who is to say where I would have been othewise? Regardless, I’d venture there were about 400 people there. Maybe more, maybe less. It is tough to tell because of that ill placed pool. See my Kix review for my story about the pool.

Before Quiet Riot took the stage, Shadow And The Thrill played. I plead ignorance. I do not know much, or anything, about this band. Their singer can sure sing, though. And, it is a three piece. Where I got fuzzy is they performed the Great White classic “Mista Bone” and their singer claimed he “wrote it with a bunch of friends of his.” So, I really should know him…. Shouldn’t I? A cool wrestling tie in for those keeping score at home. They went from doing “Mista Bone” to halfway through shifting that into the Jimi Hendrix Experience classic “Voodoo Child.” That song — though you would not know it from later WWE DVD and Network releases — was “Hollywood” Hulk Hogan‘s theme song as a bad guy in the New World Order. So, in a strange way, the Hulkster was well represented on this night. This band also brought up the owner of BLK Live to jam with them at one point. Very cool. There were a few tech problems during the band’s set and their singer seemed really annoyed by them. He shouldn’t be. It still sounded great. Give their Facebook page a like.

One thing that bugged me about the audience was a lot, and I don’t mean a few, of people were saying stupid shit about the band. “Who is singing for them now?” “I didn’t know their singer died.” “I’m not really a big fan of theirs but how often do they come around?” All shit I heard while standing there. That and a raunchy conversation I would love to forget. Regardless, what a bunch of shit. No?

After a long intermission — far too long actually — Quiet Riot took the stage. The first thing you hear is Frankie testing the drums and James Durbin testing the mic before the usual intro and then the fury of “Run For Cover” begins. It is clear there is a lot of energy in the band as this was an awesome way to start the show. I used to joke that I have no idea how the guy from Boston managed to go higher and higher when he’d sing “More Than A Feeling.” James Durbin, I believe, can even go higher than that, which, by the way, is sick.

Quiet Riot sings “Run for Cover” at BLK in Scottsdale, AZ on February 9, 2018

A cool surprise, or it would have been a surprise, was the band doing “Whatever It Takes” off their 1995 release. I say it would have been a surprise but it was mentioned in another review of Quiet Riot live on this very page a few months back. But, the surprises were still there. Durbin pitched it to the “title track of their 1993 album.” I felt a bit out of sorts when I shouted out, with the same excitement someone from my generation shouts “Ghostbusters” whenever anyone says anything close to “Who are you going to call?”, “TERRIFIED!” Might not have been as bad as I thought but I could have sworn I heard crickets when I shouted that with such glee. I got that record, Terrified, at a second hand shop a few years after it came out. It was an import because anything not from Seattle seemed to not be given a fair shot here in the US. And, this was either before Amazon or before I had discovered Amazon. But, it is one of my favorite Quiet Riot albums. If you haven’t stumbled upon it yet, do so. Very strong release.

Frankie Banali was pitched to by Mr. Durbin in a very Mr. Anderson / Mr. Kennedy way. My wrestling fans will know what that means. Frankie paid tribute to Randy Rhoads and Kevin DuBrow. But, Frankie seemed happy and in a good mood. It was a cool thing to see the respect of the audience.

After a cool version of “Sign Of The Times” and “Love’s A Bitch”, the band performed “Thunderbird” which was really cool to hear live. I always thought it was a different kind of song for Quiet Riot. Kevin‘s voice, on the recording, is very cool and James did it justice.

After a bass solo by Chuck Wright, we went to “The Wild And The Young” which sounds great at high volume live without the keyboards. When it was done on the Alive And Well album in 1999 without the keyboards though, it fell flat. I think the volume of the live show fills in the gaps a bit more, though.

Alex Grossi‘s guitar solo in the middle of “Lets Get Crazy” had me thinking about the different guitar tones I’ve heard even at BLK Live over the past few months. Brian from Kix has a more crunchy guitar tone while Tracii Guns‘ guitar has a different tone also. Grossi‘s guitars are a tad more airy, if that is a word, which fits as the drums seem to feed the Quiet Riot machine. But, wow, what a great guitar player Alex Grossi is!

James Durbin chatted on stage about 4:20 coming around twice a day. He also changed the lyric in “Metal Health” from “I really wanna be overrated” to “I really love to be intoxicated.” Though I have not mentioned it until now, Durbin is known to have Aspergers Disorder which is, depending on the day as it alternates as much as if coffee is good or bad for you, on the Autism spectrum. I just hope some of the above was play acting and he’s not self medicating. Just something to be aware of if you are in the Quiet Riot camp. Oh, and if I sound like I’m being a “Dad” with such advice, lets just say I know of what I speak. No, I do not have it. But, I have a lot of experience with it.

On the way out, the same people who I heard saying the stupid shit I mentioned above were saying “That was GREAT!” and saying they would check out their “new stuff” after hearing the band live. So, in a way, a great live show flipped that particular script.

I want to praise Durbin one last time. His command of the band, you’d never realize he’s 28. You’d never think he’s only been in this band a year. He owns that role as the frontman of an iconic band. And, he does it well.

In conclusion, I was actually very impressed with the show and the setlist. I would have loved to have heard something off of Guilty Pleasures, Rehab and more than just “Can’t Get Enough” off of Road Rage. I would have loved to have heard “Freak Flag”, “Renegade”, “Wasted”, or “Still Wild” as well off the new one. But, getting “Terrified” on there as well as “Breathless” were two surprises I did not expect. Maybe “Vicious Circle” off Guilty Pleasures or even “Sucks to be You” off Rehab would suit James Durbin‘s voice well? Just thinking out loud. All in all, I really had fun and was glad to see some of the skeptical audience was turned around. Quiet Riot are alive and well… And, with a more youthful vibe than in many years.