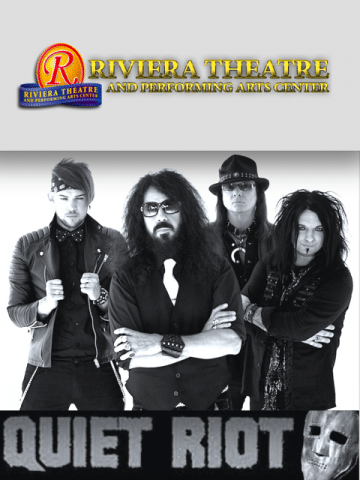 After disappointingly narrowly missing seeing Quiet Riot play live on two occasions this year, I finally got to see the “new” Quiet Riot perform with American Idol finalist James Durbin on lead vocals in North Tonawanda, New York, USA. I know. North Tonawanda? Where the hell is that? I thought the same thing but was pleased to see that the town or city is actually located very close to Niagara Falls and the Canadian-USA border.

But first what about those two narrowly missed Quiet Riot shows? I happened to be in Sault Ste Marie, Ontario at the end of March and just as I was getting ready to go to Quiet Riot‘s gig at the Machine Shop, I saw some comments online that the show was canceled and to my dismay, that turned out to be the case. I never found out exactly why that gig was canceled but whatever the case, it was truly disappointing. The other missed opportunity was the Rock N Skull Festival in late October. Quiet Riot were going to be the de facto headliner on the festival’s last night after Ace Frehley presumably decided to do a tour with Alice Cooper down under instead of playing the festival. As most of you know, the Rock N Skull‘s 2017 edition unfortunately underwent some massive line-up changes and eventually, Quiet Riot were no longer in the line-up.

I have to say thank you to the Facebook page of All Music/All Bands because had that page not mentioned the Quiet Riot gig in North Tonawanda, New York, I would have never known about it. Knowing that Rob Loiacano who runs the All Music/All Bands Facebook page is likely located in or about the Buffalo, New York, USA area, I thought that it was worth checking out where North Tonawanda was located in the New York state. I was more than pleased to find out that North Tonawanda was only located about 30 minutes from Niagara Falls meaning that it was only about a 90 minute drive for me to get there. Unfortunately, I

wasn’t able to recruit anyone to go with me to the Quiet Riot concert. Nevertheless, I made the trek to North Tonawanga, New York. Given that my babysitter was going to cost me quite a bit more than the actual concert ticket, I decided to skip the opening act and hope to time my arrival for Quiet Riot‘s set time. Despite getting lost for a little bit (GPS wasn’t working) and some snowy roads, I made it to the Riviera Theatre and Performing Arts Center with ten minutes to spare.

After getting greeted and ushered in by the very friendly staff at the Riviera Theatre and Performing Arts Center, I noted that the likely historic and majestic venue (it opened in late 1926) was about half filled, if that. Then again, the venue has a 1,100 people capacity so even a crowd of 500 people would be a good crowd size in my opinion. In the days leading to and in anticipation of Quiet Riot‘s gig, I had bought the group’s new studio album Road Rage and was actually surprised by how much I liked the record. There are no real standout tracks on the album but Durbin has brought an at times bluesy feel and definitely a different vibe with these new Quiet Riot songs. I liked Road Rage so much that I was hoping that the band would play quite a few songs from the record rather than just do a greatest hits set. After all, this would be my third time seeing Quiet Riot live in five years and each time it was with a 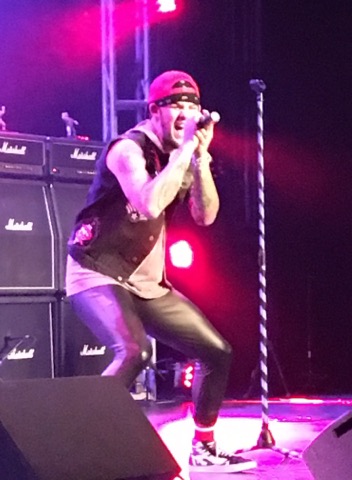 different singer. In 2013, Scott Vokoun handled the lead vocals with the band not surprisingly delivering a mostly greatest hits set with eight tracks coming from their most successful album Metal Health. In 2015, it was Love/Hate frontman Jizzy Pearl handling the lead vocals at the M3 Rock Festival and once again, the group stuck to a greatest hits like set with six tracks from Metal Health. That was understandable on both of those occurrences since Quiet Riot never released any new material with Vokoun and their set at the M3 Rock Festival in 2015 was a condensed one.

As is turning out to be a common occurrence at higher end theatres and casino like venues, the crowd — which was definitely a mostly older one — stayed mostly seated in their pretty comfy seats during the duration of Quiet Riot‘s set. I will point out that I stood for the great majority of the show but was off to the side so likely did not impede the view of the mostly seated audience. Despite having a new singer, Quiet Riot apparently stuck to a very similar setlist to what I had heard from them in the past few years. The group kicked things off with “Run For Cover” and “Slick Black Cadillac” from Metal Health. Durbin sounded really good without sounding like a Kevin DuBrow clone. I was surprised by his height and his commanding presence on stage.

QUIET RIOT…Opening tune at The Riviera in North Tonawanda, NY

Although the mostly seated crowd seemed to be enjoying Quiet Riot‘s performance, the show was definitely missing that usual concert feel and excitement. I thought that Durbin handled it well never chastising the crowd for being seated or even mentioning it for that matter. I even thought that Quiet Riot were really into the show despite the seated crowd until the last 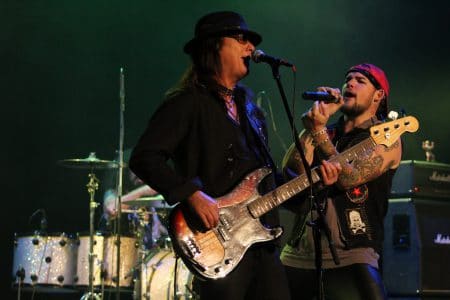 three songs of the evening when the audience (including myself) made their way to the stage and the overall atmosphere went up quite a few notches. This seemed to invigorate the band who seemed more excited and alive during those last three songs than at any prior point during the show. You can’t blame the band in that regard as having everyone standing in the audience and fans standing at the front barrier with fists pumping in the air certainly makes for a much better concert atmosphere than playing to a mostly seated audience.

I am getting a little ahead of myself. Quiet Riot‘s third song played was “Mama Were All Crazee Now” before playing “Whatever It Takes.” At first, I thought that the latter was a song off Road Rage but it didn’t seem familiar. As it turns out, it’s a song off Quiet Riot‘s 1995 album Down To The Bone. Kudos to Quiet Riot for playing a lesser known track but at the same time, it seemingly had a deflated impact on the audience’s energy levels as most of the crowd (including myself) seemed unfamiliar with the track. Next up were some easily recognizable Quiet Riot tracks in “Sign Of The Times” and “Love’s A Bitch.” I was very pleased that the group played the title track off its second album Condition Critical, which I have always really liked. “Put Up Or Shut UP” was next and during the concert, I thought how great it was that the band was playing this “obscure” track only to realize that it was already in the setlist back in 2013 when Vokoun was the singer.

As seems customary at any Quiet Riot show since DuBrow passed away, long-time drummer Frankie Banali took center stage to address the audience. At first, Banali called a likely unsuspecting fan to the front of the stage where he gave her a pair of his drumsticks. Banali later explained that the fan in question had been very supportive of the band on Facebook. Banali then 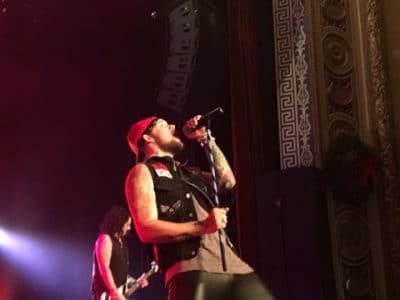 paid tribute to two Quiet Riot members that had passed away — guitarist Randy Rhoads and singer Kevin DuBrow. While I totally understand Banali paying tribute to his former best friend and long-time bandmate DuBrow, I thought that his tribute to Rhoads was unnecessary and a bit disingenuous given that none of the current Quiet Riot band members had ever played with Rhoads in Quiet Riot. Wikipedia indicates that Rhoads was in Quiet Riot only from 1975 to 1979 while Banali only joined in 1982. I would have rather had Banali share a story about DuBrow rather than have him speak about a guitarist that he never played with in Quiet Riot. Banali eventually asked the audience for a moment of silence to pay tribute to Rhoads and DuBrow, and despite some people that could still be heard chatting loudly in the back, Banali did not comment on the lack of total silence as he had requested. It was the right move for the veteran drummer as criticizing people in the audience for not adhering to his request could have led to some boos from the crowd.

Next up was the beautiful ballad “Thunderbird” which Durbin made his own. This is as good as any point to let you know how impressed that I was with Durbin. His singing and vocal range are off the charts. I can totally understand why Banali wanted him in the band even though the singer could be his son or even his grandson as Durbin announced that he was going to turn 29 years old in the near future while Banali turned 66 years old last month. I was also impressed with Banali who played the drums like a man in his 40s rather than a person who would be considered age wise to be a senior citizen. After all, this is the man who played the drums on W.A.S.P.‘s epic and classic album The Headless Children. With Banali playing with such vigour and passion, I can easily see Quiet Riot going on for another five to ten years. In addition, I was equally impressed with bassist Chuck Wright who handled his bass like a pro. Guitarist Alex Grossi seemingly put on a solid performance as well but since 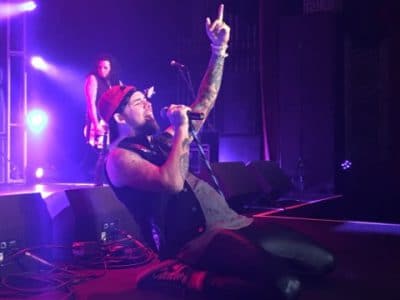 “Party All Night” was next and that’s one of my all-time favorite Quiet Riot songs. However, the band’s live rendition seemed to lack the pizzazz of the original version. Finally, Quiet Riot ended up playing one track from their new studio album Road Rage, which was the single “Can’t Get Enough” for which the band shot a video — which is its first in almost three decades. As it turns out, this was the only new song from Road Rage played live by the band. As previously mentioned, I was hoping for more new tracks, if so simply not to have Quiet Riot be one of those bands that deliver a greatest hits set night after night. Next up was an unnecessary bass solo from Mr. Wright. I didn’t think that it added much to the evening. Although I have always loved the song “The Wild And The Young”, the keyboard less version played by the band on this night lacked punch. I would have never thought that I would write such a thing but the keyboards seem to be an integral part of the song. 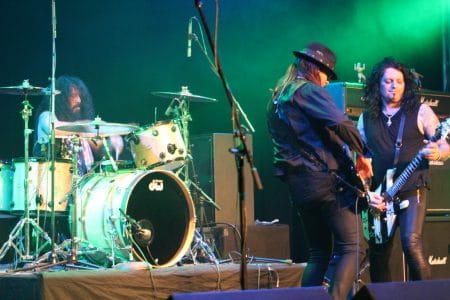