THREE VETERAN BANDS PUT ON A HECK OF A SHOW 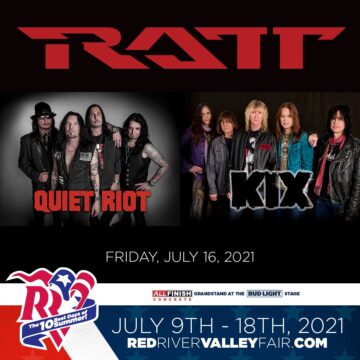 Summer was in full swing in July and finally after all the various Covid restrictions, concerts were starting up again. With that in mind, when tickets for this show first went on sale I jumped at the opportunity to see the three bands that were scheduled to play at the Red River Valley Fair on July 16th.

First up was KIX. I saw them a couple years ago but due to storm/tornado warnings and being an outdoor show, the set was cut short. This time, they were celebrating the 35th year anniversary of Midnite Dynamite and of course that was the first song of the night. KIX sounded great and the setlist was perfect for a hot summer night. One thing the band brought up was Ronnie Younkins was not on guitar. He was battling his demons and trying to get back on track. Filling in was Bob Paré. The band did make it clear that Ronnie is welcome back. Bob is no slouch on guitar and his solo was exceptional right down to the opening riff of the Cinderella classic “Gypsy Road” to pay his respects to the now deceased Jeff LaBar.

Of course, KIX have a two headed monster for guitars and Brian Forsythe can rock with the best of them. And I better mention Jimmy Chalfant doing his thing on drums and Mark Schenker on bass. Steve Whiteman was all over the stage and taught the crowd the “Thank you” “You’re welcome” routine that KIX are known for. My favorite song of theirs tonight was “Girl Money.” It’s just a fun rocker that they seem to enjoy playing for a crowd. No KIX set would be complete without the somber “Don’t Close Your Eyes” which the crowd sang along with. The set ended with two from the Blow My Fuse album consisting of the radio friendly “Cold Blood” and the title track. KIX set the tone for the rest of the night.

The next band up was Quiet Riot. Following a performance like KIX gave may be difficult for some bands but not for this one. Originally it was supposed to be Tom Keifer but Quiet Riot was a good choice to fill in. I know people have opinions on this band. Call it what you will but I really like the Jizzy Pearl fronted version. It seems any lead singer in Quiet Riot will almost unfairly be compared to Kevin DuBrow. Jizzy is a good choice as singer for sure. He is a veteran rocker, a professional and handles the frontman duties as such. Obviously, Frankie Banali was not there and the drum duties were provided by Johnny Kelly whose solo was magnificent. Yes, bands go through line-up changes for a variety of reasons but these guys really seemed to mesh well together and keep the party going.

Several Quiet Riot classics were pumped out in style for sure including the slower paced “Love’s A Bitch” as well as the Love/Hate classic “Blackout In The Red Room.” The band also dedicated the song “Thunderbird” to the recent passing of Jeff LaBar. Add in the quality bass playing of Chuck Wright and great guitar work provided by Alex Grossi and this band still rocks. For not being on the original concert flyer, I don’t think anyone really minded getting to see this band. In addition, my favorite Quiet Riot song was played. I love “The Wild And The Young.” Nothing was played from Road Rage or Hollywood Cowboys. They stuck with the tried and true songs everyone loves right to the final songs of “Cum On Feel The Noize” and their staple song “Metal Health (Bang Your Head).”

And on to the last band of the nighT — Ratt. I saw Ratt at this very same spot in 1989. Again, the line-up has changed but Stephen Pearcy is still the singer and all the classic songs one would expect to hear were played, and played to perfection. From the opening song “Wanted Man” to the finale of “Round And Round”, this was pure 1980s rock n’ roll, or should I say Ratt N’ Roll. To me, Pearcy sounded as good as he did back in 1989 when I saw them. Pearcy slithered all over that stage like he owned it. He knows how to work a crowd.  Tonight, he and the boys certainly did. There was no Warren DeMartini or Robbin Crosby like back then for guitar but Frankie Lindia and Jordan Ziff are there for a reason. They can play. Throw in Pete Holmes on drums and veteran member Juan Croucier on bass and you have the current Ratt line-up.

The band played all the classics starting off with “Wanted Man” from Out of The Cellar. Next up was “Dangerous But Worth The Risk” which is not my favorite song but still sounded cool. My favorite was “Way Cool Jr.” from Reach For The Sky as it stirs up some fond memories of high school. We all have songs like that in our lives. This is just one of them. I was also happy they played “Nobody Rides For Free.” Unfortunately, there was nothing from the album Infestation which was a bummer for me. All in all, they played a really solid collection of the Ratt essentials.

Overall, I was very impressed by all three bands. For literally having a ton of time away from playing live, they all sounded great. These are veteran rock bands and I wouldn’t expect anything less from these road tested musicians. All three bands kept it simple and let the music speak for itself. The people in the crowd were sure ready for some live music and the bands were ready to put on one heck of a show.