THE MAGIC IS THERE AS CHICKENFOOT ROCK SMALL CLUB SHOW 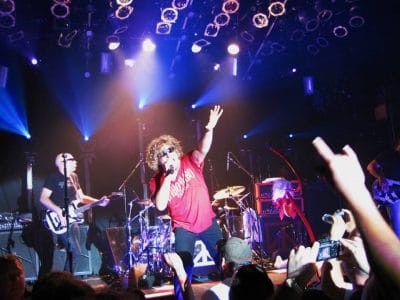 I have always had in the back of my mind to do a retro concert review of the supergroup Chickenfoot‘s tour stop at the rather small Mod Club Theatre back in May 2009 but never got around to it given my lack of photos for that concert to go along with the review. However, a few weeks ago, one photo from that very Chickenfoot concert popped up on my friend and “rival” website Decibel Geek photographer / writer Brian Ronald‘s Facebook “memories” feed. I then contacted Brian to see if he had any more photos from that show and whether I could use them on Sleaze Roxx and within a few hours, I had some quality photos to accompany this concert review. So thank you to Brian and Decibel Geek!

If I remember correctly, Chickenfoot announced that they were going to be doing a promo tour of six clubs in advance of the release of 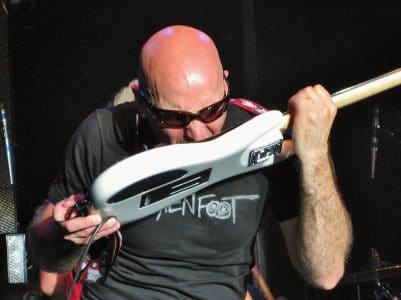 their debut self-titled album. Now you have to put things in perspective. These are four guys that most likely could have easily sold 2,000 tickets for a gig just on their names alone (former Van Halen and current solo singer Sammy Hagar, Red Hot Chili Peppers drummer Chad Smith, ex-Van Halen bassist Michael Anthony and guitar maestro Joe Satriani) and who had sold over a combined 200 million albums. Clearly, doing a tour of six clubs across North America was not going to fill their pockets by any means and frankly, they all probably didn’t need the money. That means that these four musicians were actually likely just playing these shows for the fun of it! No real agenda — just playing to have some fun. What a novel idea!

There was a great buzz as I made it out to the show. I think it was my first time to the Mod Club Theatre, which has a capacity of only about 600 people. The place was pretty jammed packed by the 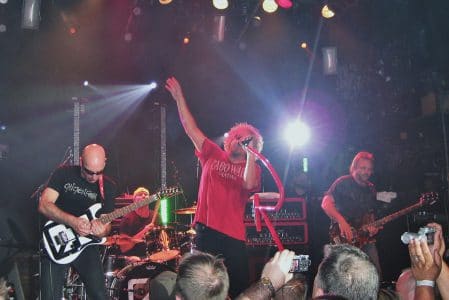 time I arrived but I was about to make it about halfway into the crowd in order to get closer to the stage. The opening act was quite odd. If I remember correctly, it was a little 12 year old kid (as it turns out by the name of Colin White) that came out with a guitar and sang some lighter fare songs. Kudos to the kid as it obviously took a lot of guts for him to go out in front of a rock n’ roll crowd all by himself and perform. In any case, the kid won the crowd even if the music that he was playing was probably not what most people in the audience would usually be listening to.

Eventually, it was time for the main event — Chickenfoot. The bummer with Chickenfoot doing their club tour in advance of their debut self-titled album getting released (on June 5, 2009) was that I was likely not going to be familiar with most of whatever they were going to play. As I look back to what 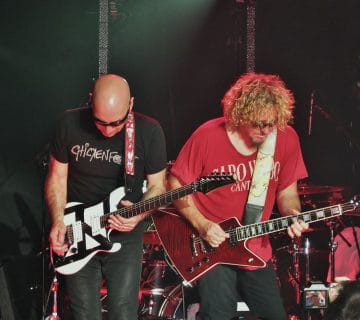 songs, if any, were released in advance of the album, I note that “Soap On A Rope,” “Down The Drain” and “Oh Yeah” had been released already by the time that Chickenfoot played the Mod Club Theatre in Toronto. As expected, Chickenfoot ended up playing all of the songs from their upcoming debut album including their bonus track “Bitten By The Wolf.” Obviously, I really enjoyed the three songs that I already knew but the two other tracks that have always stuck out in my mind from that show were “Sexy Little Thing” and “My Kinda Girl” which were likely the more radio friendly songs aside from “Oh Yeah.” It was a lot of fun seeing the chemistry between the four all-star musicians and especially the fun they were apparently having while on stage. It was also really cool being so close to the stage while seeing these superstars play. After all, the only other time that I had ever seen any of these guys live was when I had seen Hagar and Anthony way back in 1995 during Van Halen‘s Balance tour stop in Ottawa (Canada’s nation capital). No need to say that I was quite far high up in the bleachers for that show.

Chickenfoot playing “Down The Drain” live at the Mod Club Theatre in Toronto, Ontario, Canada on May 24, 2009:

Chickenfoot Mod Club Toronto May 24, 2009 Down The Drain

Chickenfoot playing “My Kinda Girl” live at the Mod Club Theatre in Toronto, Ontario, Canada on May 24, 2009:

CHICKENFOOT LIVE IN TORONTO @ THE MOD CLUB….the last of the 4 videos,which I took. Thanks for looking 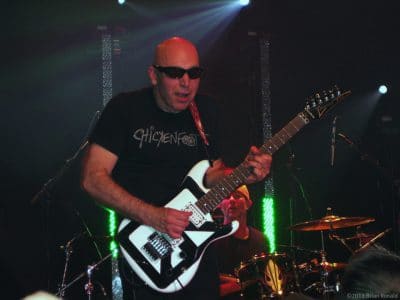 The last two encores from Chickenfoot were quite the surprise. If I remember correctly, Hagar sat on a stool with some sort of little guitar and spoke about the first song that he ever wrote which was Montrose‘s “Bad Motor Scooter.” Before long, the band was ripping through the song. It got even better when the guys tore through their cover of the Deep Purple classic “Highway Star.” What I took away from that show was how much fun that Hagar, Smith, Anthony and Satriani were having onstage and that fun really translated into the audience. It was a magical night. I still regret not having bought a t-shirt from that concert but that’s the way it goes. Funny enough, I would go back to see Chickenfoot play at the Sound Academy (now called Rebel) in Toronto less than four months later but it just wasn’t the same at all. 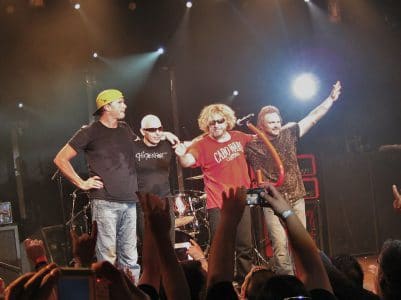