GETTING TO SEE SWEDISH GREATNESS UP CLOSE 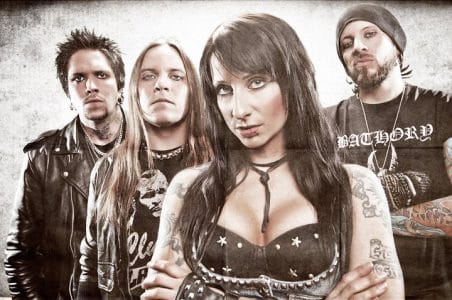 When I think back to how I “stumbled” into seeing Sister Sin playing live for the first time back in 2011, I think how lucky I was to have seen them play that night. You see, while I would be very surprised these days if a band played a concert in Toronto that I wasn’t aware of, almost nine years ago, I simply didn’t have my pulse on the Toronto concert scene by any means. I had just started writing for the Sleaze Roxx website with my first and only review dating back to August 2010 (Airbourne in Kitchener, Ontario) and I was in a transitional period music wise having “discovered” through Sleaze Roxx‘s year end top album lists that there were some younger largely “unknown” bands playing way better music with way more fire in their bellies than the older ’80s era bands that I had grown up with that were still releasing music (I am especially thinking of bands like Dokken and Queensrÿche). In fact, a few months into 2012, my musical mindset makeover was pretty much completed when I saw Diemonds in concert (opening for Slash at the Phoenix Concert Theatre in Toronto, Ontario) in March 2012 and I came to the realization that I was more excited to see those younger bands perform live than any of the usual suspects such as Mötley Crüe, Quiet Riot or L.A. Guns even though I had grown up listening to all of these latter bands since the ’80s.

I vividly remember that my wife and two kids at the time (one more would come a few years later) were going to be away for a week or so leaving me behind in the great city of Toronto. I wondered what I should do with all of this free time. Eventually, I scoured the internet to see what concerts were on deck for the coming week and I was pleasantly surprised when I saw that Sister Sin were playing on a weekday at some small bar / club called the Hard Luck Bar in Toronto. I had picked up Sister Sin‘s 2008 album Switchblade Serenades a couple of years ago after the record had figured on the Sleaze Roxx’s Top Ten Albums of 2008 so was quite excited to see them play live. I was also really digging the few songs that I had heard from Sister Sin‘s 2010 album True Sound of The Underground. I can’t remember why but I had some difficulties obtaining a copy of the latter record on CD — I definitely was not into listening to anything digitally at that time — and I had resigned myself to the fact that the best that I could likely do was pick the CD up at Sister Sin‘s show in Toronto. At that time, I was also definitely not as “hooked” into going to see concerts because as I am writing this review, I noticed on setlist.fm that Sister Sin played Buffalo the following night (on May 26, 2011). I have no doubt that if I would have had that information today, I would have made the trek to see Sister Sin play again in Buffalo the next night.

In any case, the Sister Sin concert at the Hard Luck Bar in Toronto was taking place five days from when I found about it and I was thrilled to go see the band play live. Unfortunately, we only had one family vehicle at the time which my wife took for the week meaning that I had to make my way by public transit to the Hard Luck Bar. Obviously, that’s not a big deal but it added to the sense of adventure since I was too cheap to pay for a taxi (Uber wasn’t around back then). Unfortunately, the Hard Luck Bar was not on the subway line and I actually walked for a long time from Spadina Avenue along Dundas Street West to get to the venue. It was my first time going to the Hard Luck Bar and it reminded me quite a bit of the legendary Horseshoe Tavern with the deep but narrow venue with the bar to your left as you walked towards the back to a pretty small stage. That of course is where the similarities ended with the Horseshoe Tavern since the latter has a massive room in the back with a pretty big stage for the bands to play on. I arrived at the Hard Luck Bar while the presumably last opening act was playing its set. I don’t recall much from that band aside that it was fronted by a female and the group played a cover of Mötley Crüe‘s “Too Young To Fall In Love” to close its set. I actually watched that opening act while seated at the bar as I enjoyed a nice bottled beer while keeping an eye on the hockey game.

Eventually, Sister Sin made their way onto the rather small stage. Unfortunately, Sister Sin‘s female front woman Liv Jagrell had a cold and from what I recall some sort of scarf around her neck. She apologized for not being in “top form” but it didn’t really matter because even with a cold, her singing was still awesome! Although I did take some photos of the show on my Blackberry at the time, I haven’t used that Blackberry in about eight years and I sadly don’t recall the password to access its contents. In 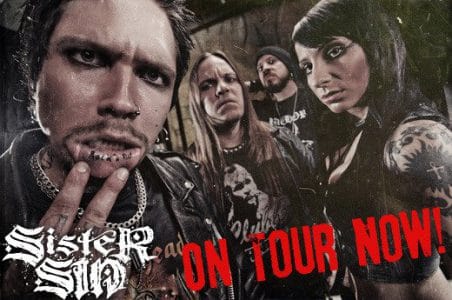 addition, I wasn’t able to find any video footage of Sister Sin‘s show in Toronto but I did find video footage from the band’s tour stop in Buffalo the next night (see below). If you listen closely, you’ll notice that Jagrell seems to be struggling a little bit and/or singing some parts of the song at different vocal levels likely due to the bad cold that she was presumably still battling at that time. In any case, I was very happy that Sister Sin decided to forge ahead despite Jagrell‘s cold. The video footage from Sister Sin‘s Buffalo show also reminds me quite a bit of their Toronto gig the night before.

One thing that I still remember vividly to this day was Sister Sin bassist Strandh‘s dominating presence due to his height and his tattooed covered body. The man looked like a beast out there. One thing that I don’t think that I realized at the time was that drummer Dave Sundberg and guitarist Jimmy Hitula were the creative forces writing wise for the band. How many drummers do you know that write most if not all of the lyrics for the songs? I can only think of two — Neil Peart (R.I.P.) from Rush and Sundberg. Accordingly, on this night, I was more focused on the towering bassist Strandh and frontman Liv Jagrell than Sundberg and Hitula. I do remember that the entire band rocked though. In terms of material, Sister Sin played songs from their two latest albums at the time — Switchblade Serenades and True Sound of The Underground. I remember being disappointed that the setlist wasn’t a little longer as the band’s set flew by but I chalked that up to Jagrell fighting a cold at the time. I reached out to Sundberg a couple of days ago to see if he might recall the setlist that the band played way back in May 2011 and he was kind enough to rack his brain to come up with the “tentative” setlist below. As it turns out, the band did have a rather short setlist.

One funny aspect of the evening is that there was another Sleaze Roxx writer (Mark Hovarth) in attendance at Sister Sin‘s 2011 tour stop in Toronto. Mark and I did not know each other at the time but were eventually introduced to each other by Sleaze Roxx founder and editor (at the time) Skid a couple of years later. One day, Mark and I discussed past concerts that we had seen and realized that we were both in attendance at Sister Sin‘s stop at the Hard Luck Bar. Mark mentioned to me recently that he remembers chatting with Sundberg in the change room and that Jagrell had a very bad cold. After the show, I made my way back home (I think it was raining) but not before picking up the absolutely stellar True Sound of The Underground (this album will pop up soon again on Sleaze Roxx but that is for another day). I was also given a little promo CD on my way out that I still have to this day.

I ended up getting to see Sister Sin play live one more time in Toronto in February 2013 when they were the special guest for Doro (with Diemonds opening the festivities). That was an amazing concert and to quote my own words about Sister Sin‘s performance that night, “I was blown away by their performance and energy” as Jagrell came back with a vengeance. One funny tidbit about that night was that I was playing in a city wide squash league at the time but decided to opt out and not play with my team that night to attend the concert instead. One of my teammates questioned me on why I wasn’t going to be playing and I simply responded that I was going to a concert that night. I didn’t give any more details but my teammate did his research and eventually figured out later that day that I was a “hair metal” aficionado.

Over the next couple of years, I would track down almost all of Sister Sin‘s prior albums / releases consisting of their EP Smash The Silence (2007) and their difficult to find Dance of The Wicked released all the way back in 2003. I ended up “finding” that CD on an Ukraine based website and the CD came wrapped in actual shrink wrap suggesting that I had bought a used CD rather than the new one that I thought that I had purchased. Whatever the case, I was thrilled to add Dance of The Wicked to my CD collection and funny enough, Victory Records re-released the album (with some bonus tracks) shortly after I acquired the original. As much as I was disappointed to hear that Sister Sin were suddenly calling it quits in November 2015 due to from what I understand Sundberg and Hitula citing burnout reasons, as I reviewed setlist.fm in the search of a setlist for Sister Sin‘s 2011 North American tour, I counted that the Swedish band played 61 shows from April 22, 2011 to July 6, 2011 on North American soil. No wonder that the band would eventually disband a couple of years later. Luckily for you and I, Sister Sin are back and hopefully if everyone does their part with “social distancing” to slow down and defeat the corona virus, the band will hit the live stage in July 2020 or perhaps later this year. Sister Sin continue to be one of my favorite bands of all-time and I look forward to the day that I can seen them play live once again.