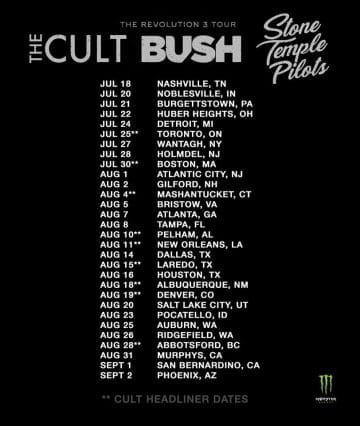 The Revolution 3 Tour received a huge boost to the line-up when Alice In Chains were added as a headliner to the already loaded bill. The tour made a stop at the Sunlight Supply Amphitheater in Ridgeway, and although in Washington state, it’s minutes away from Portland, Oregon.

Opening the show was an obscure unremarkable trio that was a cross between Bjork and The Clash. I suppose if you have money, you can pay to open a one-off show on any tour these days. The first ‘real’ act to hit the stage was Stone Temple Pilots, who I first saw many moons ago, opening for Megadeth at the Salem [Oregon] Armory. They had made an impression on me from the first listen of “Sex Type Thing” when it premiered on MTV. They were a cross between grunge and ’70s glam rock. Their late singer Scott Weiland would channel Iggy Pop on stage as a he slithered around like a human sized reptile. I was mesmerized by that guy. It’s incredible the amount of loss 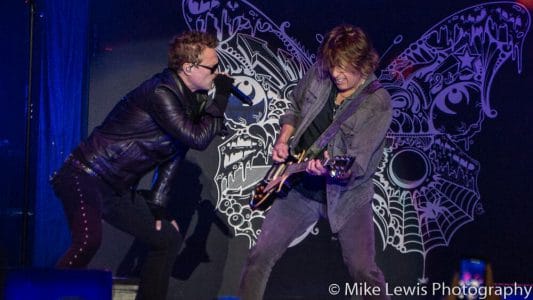 that this band has experienced with the loss of Weiland, then his successor, Chester Bennington. So when Stone Temple Pilots pressed forward with a new singer Jeff Gutt, who was an X-Factor contestant, I was skeptical. The result is the new album Stone Temple Pilots, which leave it to this band to issue back to back albums titled Stone Temple Pilots. The Stone Temple Pilots set was loaded with all the stuff you want in there — “Wicked Garden,” “Interstate Love Song,” “Plush,” “Big Empty,” “Sex Type Thing” amongst others. Stone Temple Pilots threw in two new songs — “Meadow” and “Roll Me Under” — which the audience was receptive toward but let’s face it, it’s about hearing the classics. Robert and Dean DeLeo along with Eric Kretz found a formidable singer in Gutt to step in for Weiland. Perhaps he will develop his own identity down the road, because he’s just too eerily similar to Scott right now

How do you follow up a fun filled Stone Temple Pilots set? You throw in The Cult, of course. I witnessed The Cult perform the Love and Electric albums at The Roseland Theater back to back, on seperate tours a few years ago. Those were two of the best shows I have seen 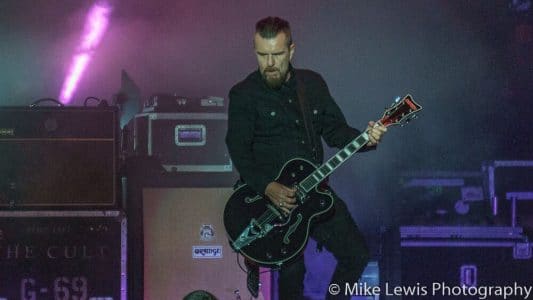 so to top performances of those two iconic albums would be a hard act to follow. The Cult opened with “Wild Flower” and the audience came unglued. They followed it up with fan favorites “Rain,” “Lil’ Devil,” “Sweet Soul Sister” with a portion of Steve Miller’s “Fly Like An Eagle” incorporated into it, “She Sells Sanctuary,” “Fire Woman” and “Love Removal Machine” with a snippet of David Bowie’s “Moonage Daydream” amongst others. Ian Astbury looked and sounded fantastic. I have witnessed him not sound very good on tours and in those cases, he’s looked heavier. He’s in tip top shape and the voice sounds incredible. When he’s on, he can deliver a vocal on “Fire Woman” that will rival the studio cut. This night was one of those of those nights. The wear and tear of show after show this deep into the tour hasn’t made Astbury’s vocals a casualty. Billy Duffy effortlessly tore through hit after hit, looking like he barely broke a sweat. The Cult consists of Astbury, Duffy, Damon Fox (Big Elf) on rhythm guitar and keyboards, (drummer) John Tempesta (Exodus, White Zombie, Rob Zombie) and Grant Fitzpatrick who has been in the band since the departure of (bassist) Chris Wyse in 2015. I’ve been seeing The Cult live since 1989 and will continue seeing The Cult live, because they’re fantastic and 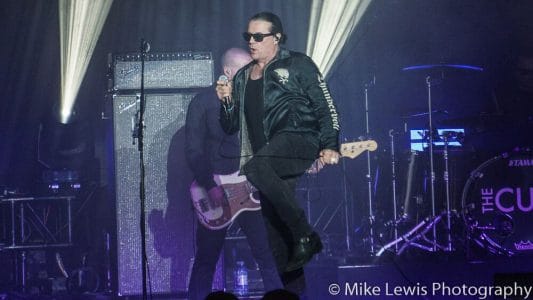 back in the earlier day,s they were the only band aside from Mötorhead that had my ears ringing for the better part of three days….

The Cult performing “She Sells Sanctuary” at Sunlight Supply Amphitheatre in Ridgefield, Washington, USA on August 26, 2018: 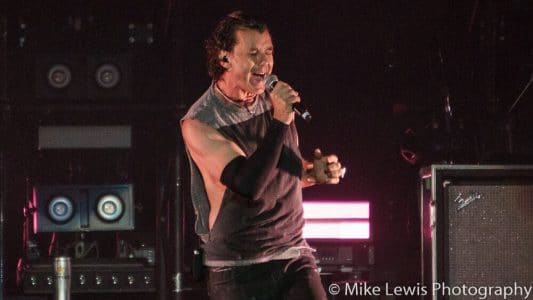 Bush were one of the biggest alternative acts of the ’90s and their 1994 album Sixteen Stone was loaded with radio hits — “Comedown,” “Everything Zen,” “Glycerine,” “Little Things” and “Machinehead.” That’s a greatest hits record right there. The only hold over from the classic line-up is frontman/guitarist Gavin Rossdale, who still looks great, sounds on key and I’m pissed off about it. At 52, Rossdale looks better than I do even from 10 yards away and I’m not happy about it. On the other hand, while the male portion of the audience seemed to be really into the Stone Temple Pilots and The Cult sets, it was the female portion of the audience that went bananas over Bush. Shortly after Bush covered The Beatles’ “Come Together” a rather safe choice, Rossdale stepped out into the audience and it was like every single female in the shed was ovulating in unison! That’s the power of rock ‘n’ roll….

By the time that Alice In Chains hit the stage after 9:00 pm, the crowd seemed to have been spent. The audience got its second wind as Alice In Chains launched into the opener “Check My Brain.” What a stellar track from the band’s first outing 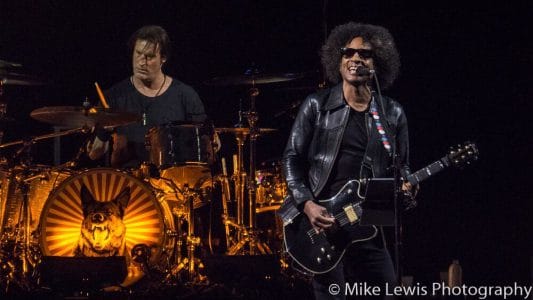 with William DuVall‘s Black Gives Way To Blue (2009). Guitarist Jerry Cantrell still harmonizes incredibly well, with DuVall and he probably could have taken over as vocalist. Bassist Mike Inez and drummer Sean Kinney are one of the tightest (and underrated) rhythm sections out there. As you might expect, the Alice In Chains‘ set was loaded with fan favorites like “Again,” “Them Bones,” “Down In A Hole,” “No Excuses,” “We Die Young,” “Angry Chair,” “Man In A Box,” “Would?” and “Rooster.” Alice In Chains put on a super performance. The stage was stripped down, with a wall of LED lights in front of the backline. It was a lot of music, which made for a long day for even the most of enthusiastic of fan, who began to drag ass mid-set. You have to admire Alice In Chains to do what so many bands are afraid to do. They performed four new cuts in the set. While the response was somewhat mixed, they powered through “Never Fade,” “Red Giant,” “So Far Under” and “The One You Know” from the new album Rainer Fog. This show gave fans a big bang for their buck, so much so that it might be too much of a good thing.

Alice In Chains’ setlist (as per setlist.fm):
01. Check My Brain 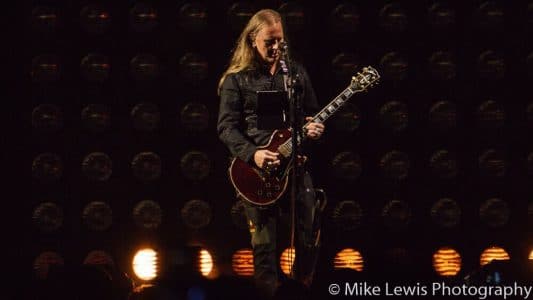 Alice In Chains performing “Man In The Box” at Sunlight Supply Amphitheatre in Ridgefield, Washington, USA on August 26, 2018:

Alice In Chains performing “Would?” at Sunlight Supply Amphitheatre in Ridgefield, Washington, USA on August 26, 2018: