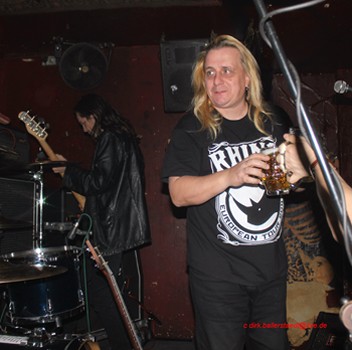 RHINO BUCKET GET UP CLOSE AND PERSONAL IN GERMANY

On Saturday night, in the wonderful city of Berlin and during the last freezing hours of January, I had the pleasure to spend time with one of the world’s last real dirty rock ‘n’ roll bands… Rhino Bucket!

These down-to-earth musicians made a two month trip (until March, as they do some more gigs) through Europe, and after touring The Netherlands, Scandinavia, Germany (and before heading to southern Europe) they stopped at the capital city of Germany at this lovely rock club named Wild At Heart to show the people how the big boys play rock ‘n’ roll. And what can I tell you… the club was packed with bad ass rock fans beyond the age of 30, and to be true at heart, after a concert like this you feel like ’18 and life’. 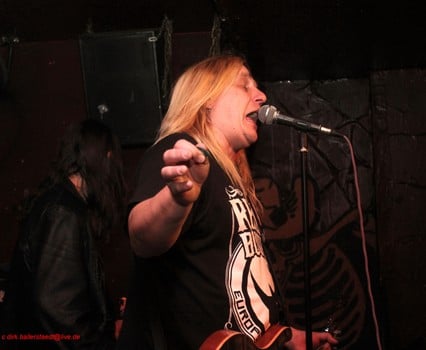 What was funny with this club is that it had no backstage area behind the stage, so Rhino Bucket had to walk through the audience, shaking hands, to finally arrive safe onstage. Frontman Georg Dolivo held a tall beer in his hand and cheered to the rock-heads while the other musicians, Anthony ‘Tiny’ Biuso on drums, Reeve Downes on bass and one of my guitar heroes, Brian ‘Damage’ Forsythe, checked their instruments before opening the bonfire that is Rhino Bucket‘s exceptional songlist. These dudes had no fear in starting the show with a brand new tune called “Who’s Got Mine” from the album of the same name, which was a CD financed by the fans through their Kickstarter project. 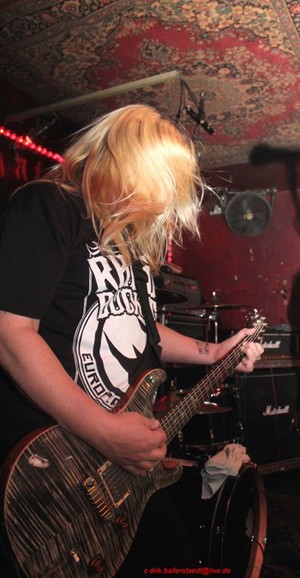 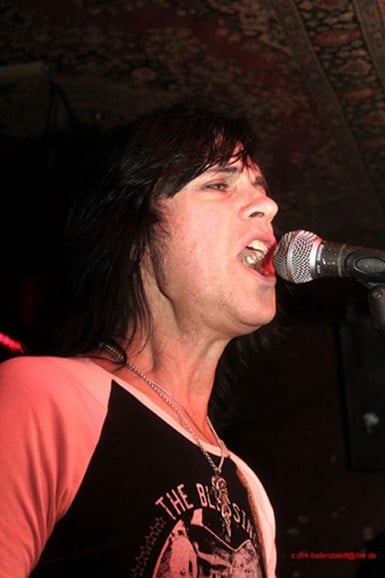 Believe me or not, but it’s a good feeling standing just a few steps away from the band who kicked my ass with their fantastic debut record back in 1990. While other lead vocalists run around on stage, or do gimmick after gimmick, Georg Dolivo (who was born in Finland) just stood there. He was laid-back and seemed to sing and scream his soul right out of his body without any strain — and the only thing I could ask myself was ‘how can he be so cool’? OK… he couldn’t run around on a stage this small anyway, but in the case of Rhino Bucket size didn’t at all.

As I said before, Brian ‘Damage’ Forsythe is one of my favorite guitar slingers and he also played in that goddamn Kix band back in the ’80s. Back then were the times when you looked cool with long hair and a guitar in your hands, and when you had the skills to play it was even better. Forsythe did not only look great (he’s about 50 now), but he was excellent at scratching and cuddling his 1971 Fender Telecaster (in color cream) like a cat on prowl to get that mouse and played Rhino Bucket‘s repertoire like he has done nothing else. Some musicians have charisma and some don’t. Brian has charisma and when he was standing a step away from me I couldn’t believe my eyes. 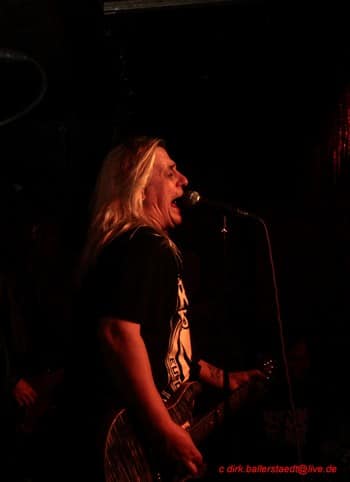 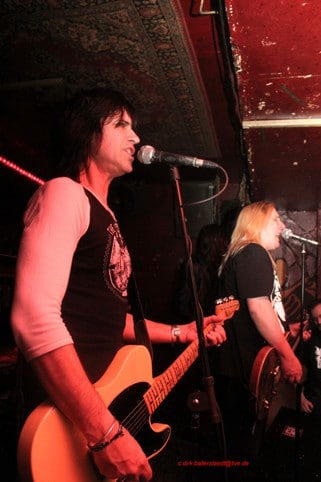 With the songs like “Lifeline”, “Message In My Bottle” ,””Her Way”, “Welcome To Hell”, “The Hardest Town”, “Hammer & Nail”, “Bar Time” and “Hollywood And Wine” Rhino Bucket know how to shoot their best songs from the hip (although they didn’t do “Inside/Outside”). When Georg sang the verse of, “don’t need no sympathy, don’t need no charity, don’t need no helping hand, all I need is a rock ‘n’ roll band” I knew what time it was — yes, freak out time with the glorious “One Night Stand”, a song which should be played at any good party. And if you need another one of the classic rock tunes which describe life in about 3 minutes, it came with the following lyrics, “I get up in the morning and I work all day, I come home late at night and I sleep my life away” — taken from one of my favorites “I Was Told”, a killer played live.

“Usually we have tons of beer backstage and a hooker’s ass full of cocaine, but we ran out of it and this club has no backstage… so let’s ride the rhino”, screamed Mr. Dolivo with a wink of the eye and the show came to a finish. 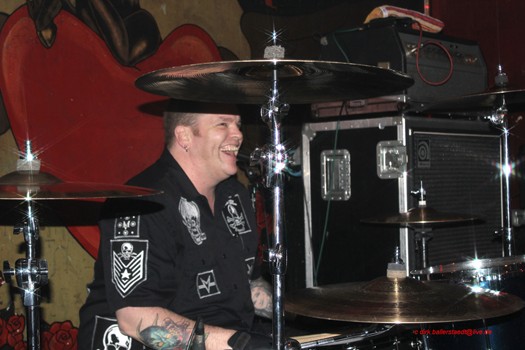 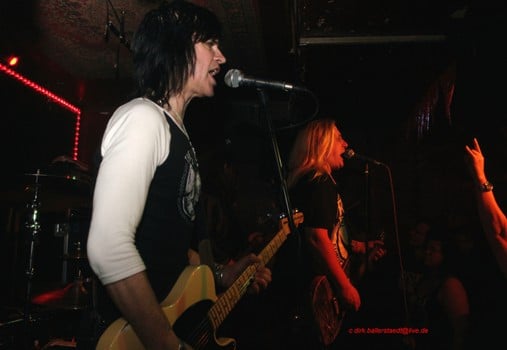 Rhino Bucket brought back good old hard rock ‘n’ roll to Berlin at a time when people are returning to the bands from the ’80s and early ’90s. When even drinking a beer, or two, won’t solve your problems the sounds of bands like Rhino Bucket help you relive your teenage years — and they are like that old Chinese proverb… it’s ‘better to light a candle than curse the darkness.

My only critical thought about the entire show was… why doesn’t Rhino Bucket perform on larger stages??! They certainly deserve it! But on the bright side, how often can you watch a great band like this in a European club and are almost able to touch them without a security guy stopping you?

After that 90-minute set, the four hard-workers that came a long way from Van Nuys, California, won over the crowd with a great sound as well as excellent songs and attitude. Before you kick the bucket, ride the rhino when they’re coming to a dump near you! 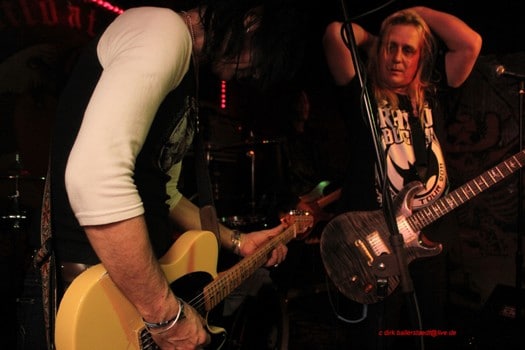 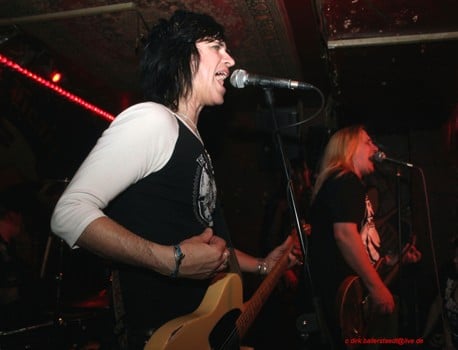