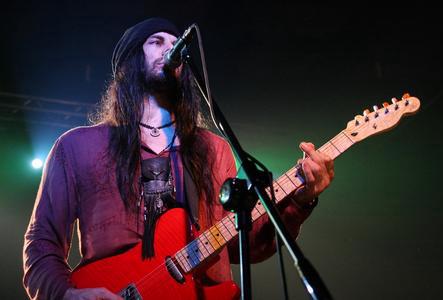 Richie Kotzen playing in Warsaw, Poland was quite a surprise. We don’t get a lot of guitar virtuosos in our town, the last one I remember playing was Paul Gilbert almost a year ago. However Paul is moderately known for his work with Mr. Big, but Richie‘s albums with that same band weren’t as successful (aside from Japan, where Mr. Big has continued to score hit after hit). Kotzen‘s concert didn’t get much promotion, so upon arriving I was expecting a very scarce crowd. To my surprise people seem to pop out of everywhere, and given the fact that the venue is not a big club, it looked like it was almost sold out in no time. 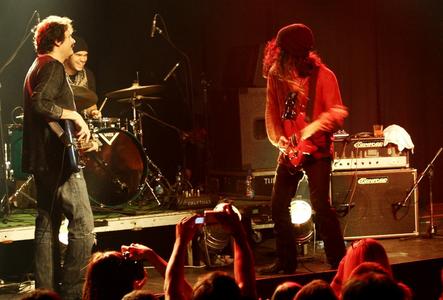 The first impression wasn’t great though. The crowd had to wait quite a while before the headliner came out. Some people were getting anxious, and some shouting and booing was heard. But finally the lights went out and the band showed up. Richie Kotzen is touring with a three piece band right now and they didn’t do any serious introductions aside from just saying hello and stating that they were glad to be present in our town. And then, they literally tore the roof off the venue.

Now, I don’t mean that their playing was in any way heavy – they played in an almost soulful way. Kotzen‘s got a unique style, as he kind of blends classic rock with funk and swing, but gives it a very ‘Kotzenesque’ feel. Surprising for many in the audience was the fact that there wasn’t a lot of crazy-ass guitar ‘diddle-diddle’, there was no tapping at all. Kotzen focused on songs rather than showmanship, and he couldn’t have done better. The truth is this guy, apart from being a very original, skilled and versatile guitarist, is also a killer singer. He’s got a clean soulful voice, the type that can make your girlfriend forget her head. Hell, the guy could have been a vocalist alone, and he still considers guitar his main forte.

But Richie Kotzen wasn’t the only one lighting the stage on fire that night. During the first song it already became clear to everybody that they weren’t about to see a one man show, but a full band going at it. Kotzen‘s got a really amazing rhythm section and a lot of songs were being graced by a loose jam of all three band members. It was very cool to see that these guys didn’t just arrive in Warsaw to play their set and go home, but instead they seemed to enjoy every moment of it. There was even a moment in the set where Richie, traditionally playing lead solos, played rhythm section to the bassist soloing for a whole damn minute. The drummer was a young guy, and he was very focused and gave this show a terrific backbone. Altogether it was clear that we didn’t pay for a lone guitar great but for a whole band playing a fantastic set. 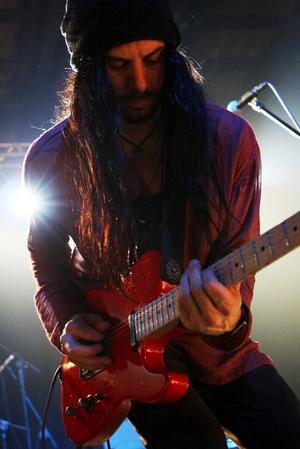 The set was more than an hour and a half long, chock full of Richie‘s material – no Mr. Big and Poison songs at all. The audience was so much in awe that the very moment the band left the stage they started to clap and shout demanding more. And the band returned, six times in total, which was insanely excellent and without precedence in the history of this venue. The last time they came back the lights were already on and the soundmen started to disconnect the amplifiers. When at first the sound people refused to stop disconnecting the stage Richie pointed that, “These people obviously want it, and if you stop us from giving them the music this will be the first time something like this happens in my 30 years of playing live.”

Now I don’t know if Richie has really played for thirty years (he only looks a little more than forty years old himself), but this brought a volcanic reaction from the crowd, and the sound people had to back down in fear of getting their asses kicked. After one more song, a mellow rendition of “Special” from 2004’s ‘Get Up’, the band thanked everybody for the warm welcome and the main man stated, “This is the first time we’ve done six encores, no bull people” and disappeared backstage.

The whole band, especially Richie, seemed very fatigued by the show. It’s no wonder, they were playing for more than two hours non stop! Yet they still had the energy to sign autographs and take photographs with the fans after the show. One of the photos I took from this show you can see just how tired Richie was afterwards. The man could barely stand, but was still committed to meeting his fans after the show. 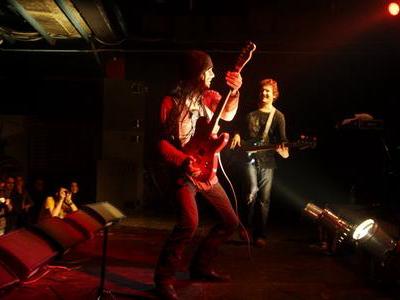 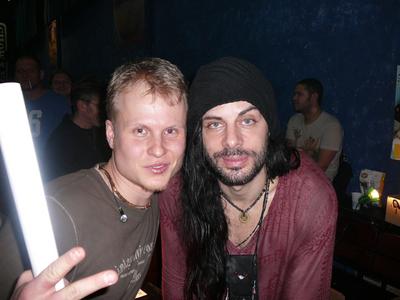 I know from reliable sources that a lot of people that came out for the show were not fully aware of Kotzen‘s music beforehand. They just checked it out because the tickets were relatively inexpensive and because the guy is a foreign guitar virtuoso, which some people find intriguing. After the show though I’m sure all of them became fans. Richie Kotzen put on one of the best shows of this year… Nuff’ Said.