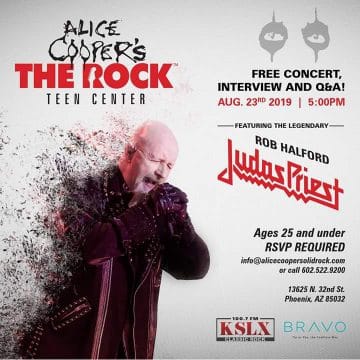 On Friday night — August 23, 2019 — heavy metal music icon Rob Halford (the legendary vocalist of Judas Priest) donated his time to perform a free concert at Alice Cooper’s The Rock Teen Center to an estimated crowd of 300 people. Halford‘s concert, interview, and Q&A session was a standing room only RSVP event designed for people ages 25 and under. The event was done, in part, to promote Alice Cooper‘s Proof is in the Pudding Music Competition that allows soloists and bands, ages 12 – 25, to compete for cash and prizes this coming September.

Alice Cooper’s The Rock Teen Center in Phoenix, Arizona has been open since 2012. This state-of-the-art facility offers a safe place for young people, ages 12 to 20, to come for free for music lessons, DJ lessons, and the use of a professional recording studio, which lends itself to teach teens how to become recording engineers. Additional features contained within The Rock Teen Center are studios for art, dance and film as well as video gaming areas. The winner of the Proof is in the Pudding Music Competition gets to open up for Alice Cooper at Alice Cooper’s Christmas Pudding concert on December 14, 2019. Additionally, the winning band gets $1,500 cash. The winning soloist gets $750 cash. Participating in Alice Cooper‘s Proof is in the Pudding will likely lead to exposure, notoriety, and paid gigs.

The event started at 5:10 pm with a performance by the 2018 Proof is in the Pudding contest winner — Undecided Youth, who had competed in this contest since 2016. Undecided Youth is a four-piece band from Phoenix, Arizona consisting of Summer Welsh on vocals, Connor Kelly on guitar, Jacob Treat on bass, and Will Hansen on drums. The band’s six song setlist opened with a cover of Led Zeppelin‘s “Immigrant Song” followed by three of their original songs — “Breathin’,” “What You Didn’t Tell Me” and “Soundwave City.” Following their original songs, Undecided Youth unleashed a very faithful cover of Led Zeppelin‘s 1973 classic “The Ocean” (which originally appeared on Houses of The Holy). The band finished their 25 minute set with a cover of Greta Van Fleet‘s chart topping hit single “Safari Song.”

Shortly before 6:00 pm, after a brief on-stage appearance by Alice Cooper and his wife Sheryl, Alice spoke of touring with Judas Priest. Cooper introduced Halford by calling him “The King of Heavy Metal.” Then, Rob Halford took the stage. “The Metal God” (a nickname bestowed upon Halford by his fans in reference to Judas Priest‘s 1980 song “Metal Gods”) opened his five-song setlist with “Living After Midnight” (from Priest‘s 1980 platinum album British Steel). Halford‘s backing band for this event was comprised of local Phoenix, Arizona musicians including drummers Mark Savale and Christian Champion, guitarists Sam Ozzman, Court Stumpf, Chloe Peterson and Kailee “Kreepo” Schoeff along with bassist Alexis Hernandez. Halford and the band sounded phenomenal as they played a roaring version of Judas Priest‘s 1979 classic, “The Green Manalishi (With The Two-Pronged Crown)” which was originally recorded by Fleetwood Mac in 1970.

Reportedly, Halford rehearsed with his backing band members only the day before the show. The lack of rehearsal preparation didn’t hamper any of the sound or performance of Halford‘s next track — Joan Baez‘s “Diamonds & Rust” — which Judas Priest recorded on their 1977 album Sin After Sin. During the Q&A session later in the evening, Halford humorously recalled meeting Joan Baez at Live Aid (where they both performed at John F. Kennedy Stadium in Philadelphia, Pennsylvania on July 13, 1985). Halford recalled thinking that he might be chastised by Baez for his version of “Diamonds & Rust” only to have Baez greet him by telling him that her son thought that Judas Priest‘s version was better than hers. 1980’s “Breaking The Law” was the next song on the set, and it didn’t disappoint as the entire crowd joined in unison with Halford to sing the chorus. Halford finished his 25 minute performance with a rousing rendition of Judas Priest‘s 1982 hit single “You’ve Got Another Thing Comin'” that featured several minutes of audience participation in the form of clapping, chanting, and singing along to the chorus of the song.

After his concert, Halford was interviewed on stage by Court Stumpf. Among many topics discussed, Halford spoke of coming to the United States to have a better quality of life, and having made Arizona his home since 1981. Halford told stories of being amazed by having so many television channels and radio stations that played rock music in the United States to choose from, as compared to his native England. Halford reminisced about experiencing New York City during Judas Priest‘s first U.S. tour shortly after the New York City blackout of 1977. Halford mentioned that he is currently writing a book, which he hopes will come out next year. When asked about Judas Priest not using profanity in their songs, Halford said, “To me, using profanity is a bit of a cop-out.” Halford added, “I’m a strong believer in the First Amendment. However, I just find it more interesting and entertaining to convey a message that doesn’t have profanity in it.” 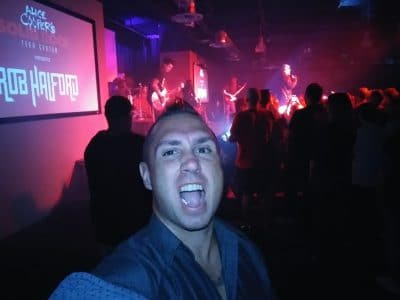 Ryan Witting from Rockin’ You All Night

Halford spoke on sobriety and spirituality as well. He stated, “There’s a place where you go, and you really have to get to that place to kind of know that you can’t go any further. The only way away from that place is up. So, I got to that place. It is a very very dark place.” Halford exclaimed, “This is the great thing about being sober, you start to remember things, that before, you’d forget.” The audience applauded Halford after he stated, “I’ve been clean and sober now for 32 years, and it is all about one day at a time.” Halford went on to say, “Being clean and sober was the best thing that could happen to me as a person. The most profound part about being sober, for me, was coming to terms with the fact that I realized… That I have to have something more in my life. So, my spiritual faith became incredibly important. It was literally a case of being reborn again, and today that’s part of my day-to-day existence.” Halford elaborated by saying, “My spiritual faith and belief sustains me. I have to have it in my life.  Before I couldn’t live without drink and drugs, and now I can’t live without my spirituality and my faith, which is a great trade-off.”

Questions from the audience were welcomed and encouraged. One audience member asked if there was any chance of another Fight album being made. Fight was Halford‘s first post-Judas Priest band, which released two full-length albums — 1993’s War of Words and 1995’s A Small Deadly Space. Halford replied to the Fight fan base by saying , “I never say never.” Halford acknowledged inquiries about his industrial-metal band Two, which released one album — 1998’s Voyeurs — by stating, “I still have so much I want to do as a musician.” When asked about the the possibility of K.K. Downing (who stopped performing with Judas Priest in 2011) returning to play guitar for Judas Priest, Halford stated, “It is such an emotionally charged question.  It’s like ‘Why isn’t Ace back in KISS?’ I think what will happen will happen.” Halford told his fans, “I know that’s kind of a nebulous response.  I like to be as honest as I possibly can. I think being honest is a pretty good way to live your life, and I don’t want to send mixed messages.” In a true touch of class, immediately after Halford finished his near 50 minute Q&A session, he met with, took photos with, and signed autographs for all fans in attendance.