Nothin’ But A Good Time at Mystic Lake Casino Hotel 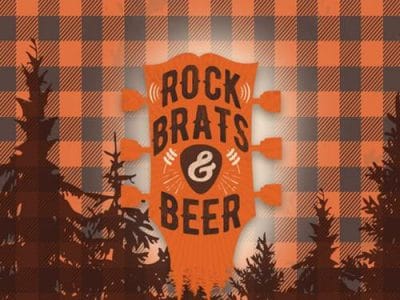 Mystic Lake Casino Hotel hosted Rock, Brats & Beer on October 13th and 14th, which played host to four great rock ’80s rock artists, three flavors of brats and I believe eight different styles of beer. What more could one ask for? Hopefully nice weather. Everyone knows that outdoor concerts can be somewhat unpredictable; and since it’s autumn in Minnesota, you never know what you’ll get.

Night one kicked off as the sun began to set. It was a cool Friday evening, but when dressed appropriately, it was very tolerable. 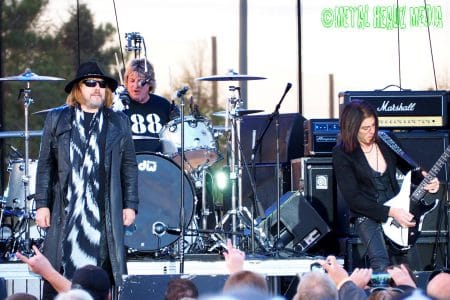 Dokken were the opening band of the evening and blasted right into “Don’t Close Your Eyes.” Even though they were the opener, they were treated like a co-headlliner by being able to play a full set. Their set was mostly filled with their early material, like “Kiss Of Death,” “Breaking The Chains” and “Alone Again” along with a couple tracks from later albums. Don Dokken‘s vocals were much better than the last time I saw him. The songs were still tuned down a bit, but he still did a great job belting out the high notes as good as his aging vocal chords could manage. Of all the great songs they played, I must say my favorites of the night were “Into The Fire,” “Maddest Hatter” and “It’s Not Love.” The rest of the band members were at their best as well. Jon Levin did a great job on the lead guitar and original drummer “Wild” Mick Brown and Chris McCarvill on bass held everything together with ease. “Tooth And Nail” closed out Dokken‘s great set and a well deserved break was given for everyone to grab some delicious brats and beer.

I had the great pleasure of seeing Twisted Sister on their farewell tour a couple years ago. Dee Snider was a beast on stage and I couldn’t wait to see him with his solo band this night. Snider‘s setlist was mostly comprised of classic Twisted Sister material, a

couple covers and a few songs off his most recent album We Are the Ones from 2016. The title track from the aforementioned album got the music started along with “The Kids Are Back.” Dee‘s band, comprised of bassist Tanya O’Callaghan, guitarist Robbie Angelucci and drummer Mike Dupke (formerly of W.A.S.P. and John Mellencamp) kicked some serious ass. They had no problems keeping up with the energy Dee was putting out on “You Can’t Stop Rock ‘N’ Roll,” “Rule The World” and Nine Inch Nails‘ “Head Like A Hole.” The biggest disappointment of the night for me, was his slowed down, ballad version of “We’re Not Gonna Take It.” That feeling didn’t last long once Dupke kicked in the drums as they played a full, in your face rendition of the song. The high point of the night was when Don Dokken stepped out on stage to say “Hi” and Dee, wearing dark sunglasses, wasn’t sure who he was and asked security to remove him from the stage. Finally realizing who it was, Dee apologized and they posed for some photos for the fans. My favorite songs of the night were “The Price,” “Burn In Hell” and a cover of Lit‘s “My Own Worst Enemy” closed out a great first night of great ’80s music.

Saturday’s festivities were delayed due to some heavy rain showers. My wife and I holed up in a friend’s camper and enjoyed celebratory drinks for my wife and our friends’ birthdays. Once the rain let up, we headed over to the venue to get settled in for 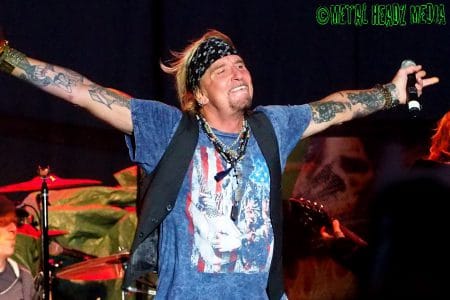 opener, Jack Russell’s Great White. This would be my third time seeing them this year and they never disappoint. “All Over Now,” “Desert Moon” and “Mista Bone” started out the night with Jack requesting guitarist Tony Montana (who wrote the song) to take over vocals on the second verse. This version of the band, which includes the highly underrated guitarist Robbie Lochner, bassist Dan McNay and drummer Dicki Fliszar is highly superior to the other version, in my opinion. Halfway through the set, the rain started to return. As the band and crowd got more into the music, the harder it rained, and the next thing we knew, we were caught in a downpour. Being from Minnesota and never knowing what to expect, almost everyone was well prepared that night with rain gear to go around. Some people fled, but the majority of the fans toughed it out with the band. My favorites of the night were “Lady Red Light,” “House Of Broken Love” and “Rock Me” along with all their hits. 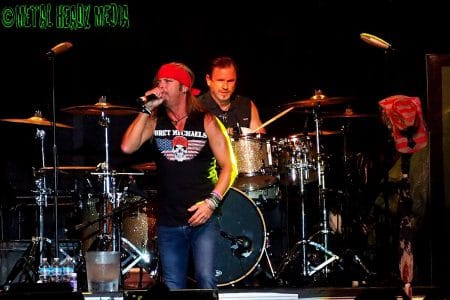 Once the pouring rain turned to a light mist, Bret Michaels closed out the night filled with Poison favorites. Bret‘s setlist doesn’t really change much, but he and his band always put on a great show. The soaked to the bone crowd enjoyed every note of “Talk Dirty to Me” and “Look What the Cat Dragged In” to start off. Cover songs “Sweet Home Alabama” and “Your Mama Don’t Dance” kept everyone rockin’. Bret‘s well oiled band consisted of Cinderella bassist Eric Brittingham, guitarist Pete Evick, Mike Bailey on drums and Rob Jozwiak on the keys. The ballads “Something To Believe In” and “Every Rose Has Its Thorn” helped anchor the closing songs “Nothin’ But A Good Time” and a cover of KISS‘ “Rock And Roll All Nite” closed out the night.