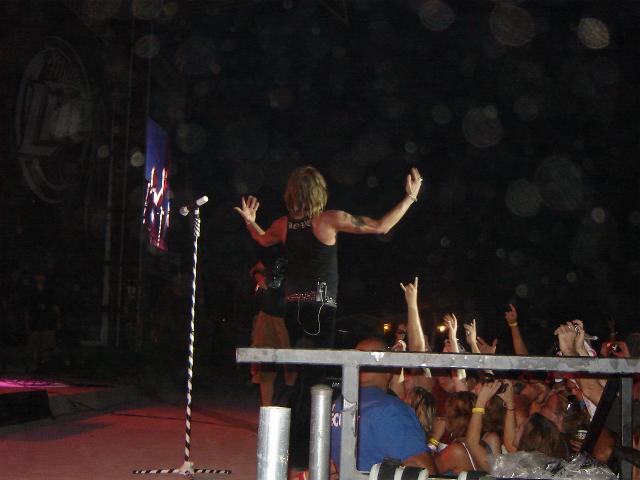 I got back to the hotel after 1am following Thursday night’s show…so it was a quick turnaround, especially when you take into account the hour travel time.

Thursday night I met some people from Pryor that have been attending the Country Festival since the beginning. They offered to let me stay at their campsite, but I had already got the hotel and I couldn’t give up the AC. I love Rock and Roll, but I always seem to get along well with the Country Western crowd…I like their down to earth personalities.

I knew that if I could meet some locals that I could find out the “in and outs” of the festival…similar to how most people in Austin know all the quirks of SXSW (i.e. wristbands are a rip-off).

The first thing that I discovered was that the VIP was a good deal…the food was good…and it provided a break from the heat (huge tent w/fans). The locals determined that their VIP bands from Country Fever were identical to the ones for the Rock Festival…so…for $20 I was now VIP. The best $20 I spent all weekend.

I’m sun friendly and I got a coat of armor, but the heat was intense. I trained for this festival similar to preparing for an athletic event, and I started hydrating with lots of water the week before. But the sun is a powerful opponent. It doesn’t matter what kinda shape you are in…the heat kills. Males in their 20’s (more than any other demographic) die at the Grand Canyon every year because they think being in shape will negate the heat.

The VIP saved me.

Another cool feature to the festival (other than the ticket fiasco, this was a very well run festival) was the ability to come and go as you please. The party in the parking lot was almost just as good.

I arrived at noon and just in time to see all of the bands…I could have slept in an extra hour.

Zendozer was horrible…HORRIBLE. They obviously knew the promoters…there is no way should they have been on that stage.

Next up was the Greg Leon Invasion. I know you probably are saying “who?” He was one of those guys who was never able to achieve stardom. He played guitar for Quiet Riot after Randy Rhoads left and he played with Dokken before George Lynch. I thought he was excellent. I bought his CD and it’s very good. If I had to describe to someone the kinda music that I like the most, I could tell them to listen to “Soldier of Love” from Greg Leon. It has the hard rock melodic sound that I enjoy.

Dirty Penny was next. They are similar to Vains of Jenna…youngsters who have the 80’s look and vibe. I thought they were ok but I didn’t hear anything great. Vains Of Jenna blows them away. I saw the guys in VOJ walking around in the crowd…they are on the Poison/Ratt tour. I told them about Steven Adler‘s antics from the night before and they got a good laugh out of it.

White Lion was the first “big” band to play. There was no dispute over the name, they were kicked off the Poison/Ratt tour before it started due to issues with their name and ex-band member Vito Bratta. I have never been a fan and they didn’t impress me much. Mike Tramp still looks and sounds good, I gotta give him credit for that.

Y & T is a band that really doesn’t fit the theme of this festival. I associate them as being more of a band from the 70’s. Eddie Trunk (the last great rock DJ) introduced the band as being one of his all-time favorites. Dave Meniketti is a guitar hero…they were great…and the crowd loved ’em. Meniketti asked the crowd if they remembered Y & T and there was a roar. The coolest part was when the crowd started chanting “Y & T… Y & T…Y & T…”

Slaughter…what a waste of time. All Mark Slaughter did was play cheerleader…and the rest of the band resembled cheap labor (his normal bandmates are playing with Vince Neil). For those who need a history lesson, Vinnie Vincent followed Ace Frehley in KISS…he left KISS and started the Vinnie Vincent Invasion…Mark Slaughter became the singer. Take away Vinnie Vincent and you have the band Slaughter. His voice sounded shot.

Quiet Riot. Kevin DuBrow is a good rock and roll frontman, he can work a crowd. I thought they put on a good show…check out the picture.

Ratt…they rocked! You could tell that they were taking this event seriously. Stephen Pearcy was better than I have ever seen him. He kept the between song banter to a minimum, which for him is a good plan. In the past he seemed almost uncomfortable between songs. Blotzer is a great drummer, in Eric Singer‘s league…see picture.

Poison…I only stayed for 5 songs (wise decision because traffic was a nightmare after Poison due to an accident)…they sounded good. It is popular to knock Poison but they are good at what they do. The girls love ’em and they have catchy songs. Poison is a fun band and they have played a big role in keeping the scene alive. Thursday night I met these two BEAUTIFUL (11 on a scale of 10) girls that had laminates…I asked them where they got their passes and they both smiled and said “Poison“…not hard to figure out. 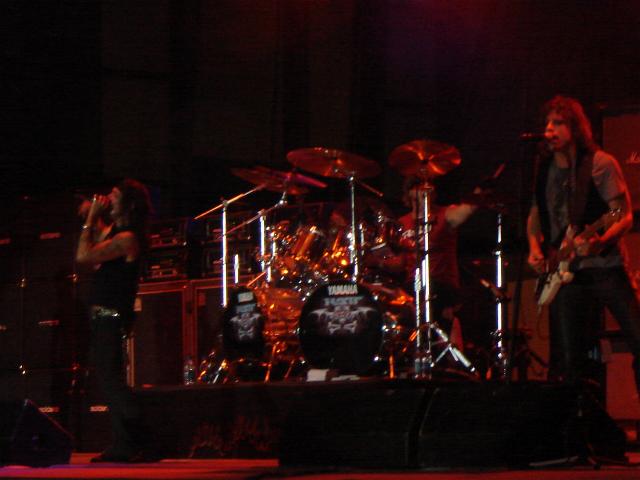