SAMMY AND FRIENDS BRING THE PARTY TO THE FALLS 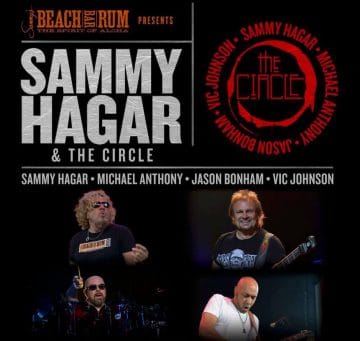 Wow! What a venue! And I am not just saying that because Fallsview Casino was nice enough to grant me a photo pass for Sammy Hagar & The Circle‘s first seemingly sold out night of a two night stand at the venue. The Avalon Ballroom Theatre in the Fallsview Casino has a grand appeal, which is more fitting for a classy opera than a rock n’ roll show. Funny enough, even Hagar made a similar type comment (without the reference to the opera) late in the group’s set about how classy the venue looked and that he wasn’t used to playing at such a nice venue.

By the time that the photographers were ushered to selected spots on a large ramp (with some sort of carpeting I believe), the venue looked completely sold out and mostly filled with people into the second halves of their life. That was not surprising when you think that the Red Rocker, Sammy Hagar, is turning 70 years 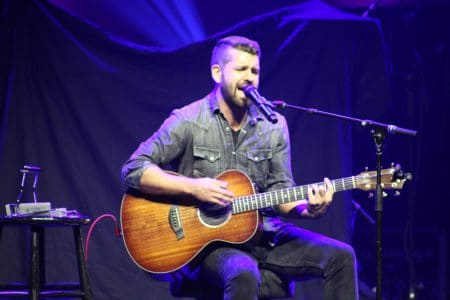 old in October of this year and has been playing rock n’ roll for about 50 years. Considering that Hagar has been in the public limelight since his stint in Montrose starting in 1973 and is still selling out venues almost 45 years later is truly outstanding. In very similar fashion to when I first saw Chickenfoot play in Toronto back in 2009, the opening act was a pleasant albeit left field type of surprise. This time, it was Sammy Hagar‘s son Andrew who was opening the show all by himself with his guitar and harmonica. Andrew Hagar proved to be entertaining and charismatic with his chatter between songs. I believe that the last song that he played was called “Good Enough” which was not a cover of the Van Halen classic from back in the 5150 days but rather his own composition. After only playing three to four songs, Andrew Hagar made his way off the stage and it was time for Sammy Hagar & The Circle! 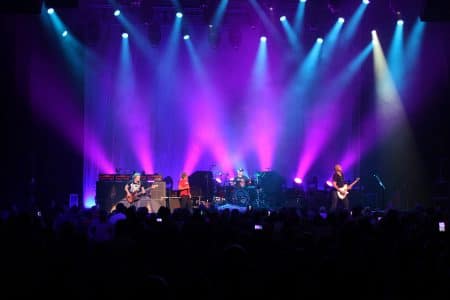 Nevertheless, the vibe coming from Hagar, bassist Michael Anthony, guitarist Vic Johnson and drummer Jason Bonham was one of fun and partying. The band opened with one of Hagar‘s best tunes — “There’s Only One Way To Rock” — followed by “Poundcake” which I have to be honest never really liked that much. The crowd was up on its feet from the get go and well into the show right away. The first three songs went by quite quickly and before long, I was getting ushered to my seat which was only seven rows from the main stage. Thank you Sammy Hagar & The Circle!

What became apparent right away by the time that Hagar and company launched into the classic “I Can’t Drive 55” is that Sammy and company had so many great songs under their belt that any song played on this night could have legitimately been a song played as an encore. “I Can’t Drive 55” is definitely encore material yet was being played as the fifth song of the night. I was absolutely thrilled when Sammy Hagar & The Circle launched into Chickenfoot‘s “Big Foot” because I love the song and it’s nice to hear some newer tracks as well. It was also fun seeing Anthony take a turn singing lead vocals on a couple of songs including “I Can’t Drive 55.”

Sammy Hagar & The Circle performing “I Can’t Drive 55” at the Avalon Ballroom Theatre at Fallsview Casino in Niagara Falls, Ontario, Canada on June 21, 2017:

Sammy Hagar and The Circle, I Cant Drive 55, Fallsview Casino, Niagara Falls ON 6/21/17

Sammy Hagar and The Circle, I Cant Drive 55, Fallsview Casino, Niagara Falls ON 6/21/17

The camaraderie between band members was clearly evident on stage. There’s no question that Sammy and Mikey have a very special bond dating back to their days in Van Halen and they always seem like they have so much fun together on stage. It was funny to hear Jason Bonham describe how he joined the band in that he was jamming with the guys one night and in the band 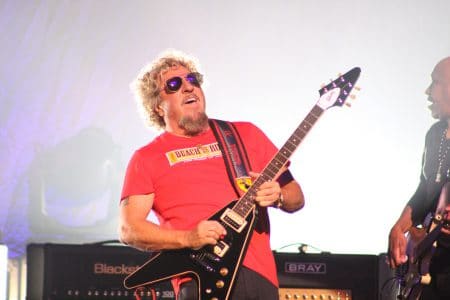 the next day. I forgot that Bonham was an English fellow. Hagar took a shot at ribbing the drummer by stating that no one was able to understand him speak during their US tour but Bonham was quick to reply by stating that they were now in Canada and it was Hagar that the crowd could not understand. Hagar also pointed out that while Bonham was suggesting that he had joined the band, he had actually been in the band for about three years already.

The great encore caliber songs kept on coming with Van Halen‘s “Right Now” — which is one of my favorite songs involving Hagar and which still gives me goose bumps to this day — and “Why Can’t This Be Love.” The audience seemed to be most into the Van Halen tunes so those two tracks went over very well! I was pleased to hear the band play Hagar‘s “Little White Lie” which is a phenomenal track and frankly better than anything that Van Halen have come up with since first parting ways with Hagar back in 1996. The mood slowed down a tad with “When The Levee Breaks” which had the stage filled with smoke if I remember correctly. “Top Of the World” had the crowd singing along once again before Hagar and company closed the set with “Heavy Metal” (not one of my favourites) and the ultimate party tune “Mas Tequila.” And that’s exactly what Hagar and company brought on this night — a partying good time atmosphere.

Sammy Hagar & The Circle performing “Top Of The World” at the Avalon Ballroom Theatre at Fallsview Casino in Niagara Falls, Ontario, Canada on June 21, 2017:

Sammy Hagar and The Circle, Top Of The World, Fallsview Casino, Niagara Falls ON 6/21/17

Sammy Hagar and The Circle, Top Of The World, Fallsview Casino, Niagara Falls ON 6/21/17 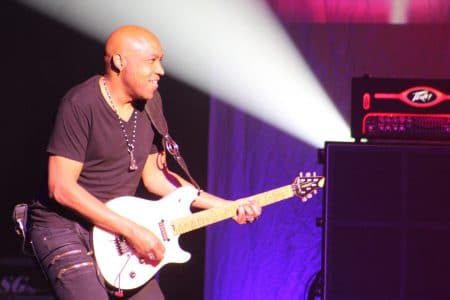 The first encore saw Hagar and Johnson play a really good acoustic rendition of Van Halen‘s “Dreams” which brought goose bumps to my arm and apparently Hagar‘s as well as the singer told the crowd at the end of the song. From there, the band brought it home with a killer rendition of Led Zeppelin‘s “Rock And Roll” which song — funny enough — I associate more with Van Halen due to their 5150 era Live Without A Net video than Led Zeppelin (I was too young when the song first came out). Overall, Hagar, Anthony, Bonham and Johnson delivered an energetic, enthusiastic and party atmosphere performance, and I was really impressed with Hagar who at age 69 expanded a lot of energy and seems to show no signs of slowing down. At the rate he’s going, I would not be surprised to see him rocking on stage for another 25 years. 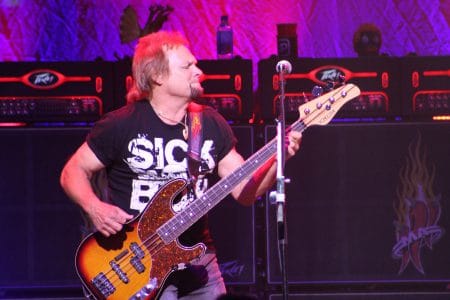