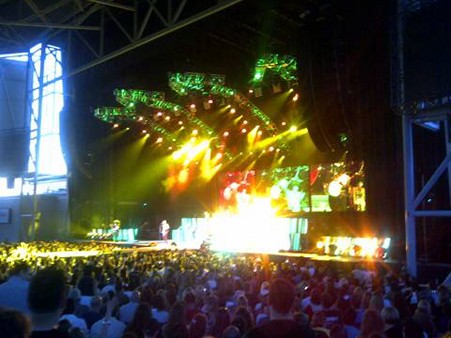 For what seems like the last couple of years, the Scorpions have been on their supposedly last tour. I say this with skepticism since KISS did a farewell tour in 2000-01 but have since gone on many other world tours, including one scheduled to come to Toronto this September. Perhaps the Scorpions will stick to their word and hang it up after this tour? In any case, what makes their final — or farewell — tour sort of funny is that this was their second stop in Toronto, two years later, as part of their ‘final’ tour promoting their ‘Final Sting’ CD. Even the Scorpions‘ set list was almost identical to the one they played two years ago in Toronto — the only real change it seems is that the tour stop this time around was part of their ‘Final Sting World Tour’, while their previous stop two years ago was part of the ‘Get Your Sting And Blackout Tour’.

I skipped the Scorpions‘ first ‘final’ tour stop in Toronto in 2010 mostly because the last time that I had seen them in concert, back in 2003, I had left disappointed with their show and performance. It was not that they did not play well or anything like that, but the spark that you can sometimes feel at a live show clearly was not there. In fact what had led me to attend the Scorpions‘ concert back then were the two excellent opening bands — Dokken and Whitesnake. This time I was hoping that Tesla would open for the Scorpions as they had mostly done for the last two months leading to the Toronto show. Alas, this was not to be.

Given that the Molson Amphitheatre is an outdoor venue with a roof over maybe half of it, the opening act’s stage was bare bones since they were playing in broad daylight. There were three words, ‘Before The Curtain’, over the opening band’s drum kit but I just thought that was part of the Scorpions‘ stage show — perhaps a play on their German heritage/final tour…

The band that opened the show was a complete shock. Four lads in dark shirts and pants with at least two of them wearing ties — a cleaner version of Green Day perhaps. Is this a hard rock/metal concert? The opening band started to play and I am sure that they are good, but the disappointment of not seeing Tesla, or a better known opening band such as Queensryche who later opened for the Scorpions after this show, was too much. After leaving the opening band’s third song to get a drink and doing some quick Google searches on ‘Before The Curtain’, I found out that this was a fairly new ‘local’ band from Peterborough, Ontario. Any hope of seeing Tesla had just evaporated.

Why would the Scorpions bring out a relatively unknown band for their Canadian leg of their tour rather than a more established band? I could only conclude because they were not up to offering, to what appeared to be to the half full venue, a ‘superstar’ bill.

The Scorpions started with “Sting In The Tail”, one of three new songs from their ‘last’ CD of new material — ‘Sting In The Tail’. The stage show had lots of lights and a long ramp leading into the audience — things looked promising. “Make It Real” was next, followed by the sing-a-long favorite “Is There Anybody There?”, and the band seemed to be hitting their stride with the next song “The Zoo”.

Klaus Meine‘s vocals were good, however his interaction with the crowd really left a lot to be desired. You would think that a seasoned veteran such as Meine would be able to communicate with the crowd a little better. “Toronto, there is no one like you” sounded so cliche. Perhaps the Scorpions were just intent on letting their songs do the talking.

Most people know that the Scorpions have some fantastic ballads, however I never expected to hear not two, three, but four ballads in a row! Is this a hard rock/metal concert? The quad of ballads started with “Wind Of Change”, followed by “The Best Is Yet To Come”, followed by “Send Me An Angel”, followed by the classic “Holiday”. All good songs, but please… let’s concentrate on your faster tunes. After hearing four ballads in a row earlier on, I was quite disappointed to have to hear “Still Loving You” as one of the encores.

I would have let the five ballads go if the Scorpions would have at least played as many songs as possible. Rather the Scorpions also played one instrumental (“Coast To Coast”), offered one filler guitar solo (“Six String Sting”) and one filler drum solo (“Kottak Attack”). KISS figured out over 25 years ago that the fans would rather hear another song… unless you are named Eddie Van Halen. Matthias Jabs — no matter how happy he looked to be there — does not fall in the guitar icon category and should not be given a guitar solo slot during any show. Sadly, dropped from the Scorpions‘ set were faster classics such as “Bad Boys Runnin’ Wild”, “Comin’ Home” and “Another Piece Of Meat”.

At the end of the day, while the Scorpions played some good songs that were close to the original versions, I left disappointed — thinking that I had not received my money’s worth, having heard a rather bland emotionless set full of ballads and filler stuff. 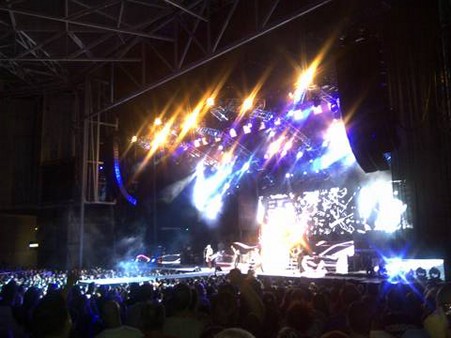