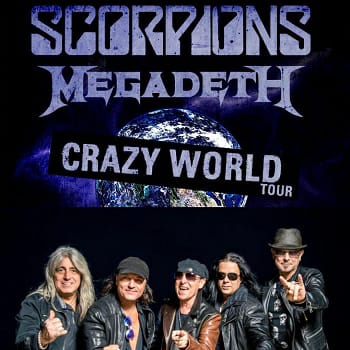 Deja vu. That was definitely my impression of the Scorpions‘ latest tour stop in Toronto after seeing them at the same venue (albeit under a different name) two years prior. The Scorpions‘ concerts have always been a bit of hit and miss affair for me. When I first saw them live in 1990 as they were touring in support of their very good Crazy World album, I thought that they put on a great show. Then again, five years earlier, I had proclaimed that the Scorpions were my favorite band (this lasted only a few months). The next time that I caught the Scorpions live was in 2002 and I had left disappointed with their performance finding that both openers Dokken and Whitesnake were much better live on that night. The third time was not a charm as my next time seeing the Scorpions in a live setting in 2012 was a true disappointment. Part of that had to do admittedly with my expectation that Tesla would be the opener only to find out at the show that a Canadian band by the name of Before The Curtain was opening instead.

Although my third time seeing the Scorpions was quite the disappointment, I still went to see them at the same venue in 2015 mostly because Queensrÿche were opening that time. I left very impressed with the Scorpions so had no hesitation this time around and two years later in forking out more than $150 Cdn to get a spot in the general admission area to see them once again. The fact that Megadeth were opening for the Scorpions was quite enticing given that I had never seen the former play live before. However, it seemed early on that I was seeing a replica of the Scorpions‘ 2015 live show except that drummer Mikkey Dee had replaced James Kottak who was let go for what appears to be addiction issues and erratic behaviour. As I checked out the Scorpions‘ setlist for their 2015 concert in Toronto, I realized that I had just been privy two years later to roughly the same concert from the German veteran hard rockers. While that might have been satisfactory for most of the crowd on hand, it wasn’t for me. When I’m paying over $150 Cdn for a concert ticket and going to see a band play live two years later, I expect some material changes — perhaps a new stage show or a vastly different setlist. Yes, the drummer change would qualify as a material change for the band but it had little apparent impact with respect to the group’s live show.

The Scorpions could have taken a page from Canadian veteran hard rockers Helix who even though they played virtually the same setlist within a seven month span when I saw them play live in April 2015 and November 2015, they completely changed the order in which they played those same songs which gave the impression that this was a “fresh set” or even a brand new setlist. It’s not like I haven’t seen bands play the same set before as in 2012, I saw Iron Maiden (with Alice Cooper opening) in Ottawa and Toronto within days of each show but I simply expect that if I am going to see a major act such as the Scorpions who have embarked on a new tour, the stage set, setlist and concert in general will have some material differences. As it turns out, the only material difference this time around for the Scorpions was that they had a different opening act — Megadeth instead of Queensrÿche.

Having never seen Megadeth live before, I have to confess that this was a major selling point for me to fork out over $150 Cdn to get into the general admission area and be up close to the veteran thrash metal band. Luckily, a friend had posted the set times for each act with a very early 7:00 pm start time for Megadeth and a surprisingly early set time of 8:30 pm for the headliner Scorpions. if it wasn’t for catching that random Facebook post, I would have likely missed Megadeth‘s set as usually headlining bands play sometime after 9:00 pm. Megadeth ended up starting right on time in broad daylight. With the almost ridiculous amount of new music that floods the Sleaze Roxx headquarters, I usually do not listen that often to some of the bigger bands such as Megadeth and Scorpions given that I have already heard their songs for what seems like thousands of times before. It’s not that I don’t enjoy their material because I do but listening only to major bands’ greatest hits is just not in my DNA at this time. 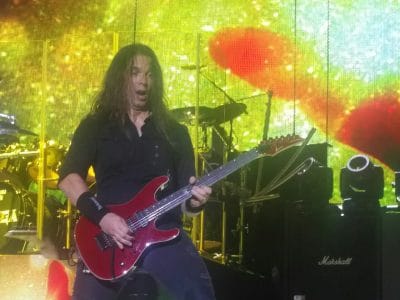 That being said, it was fun to hear what turned out to be essentially a greatest hits set from Megadeth. Obviously, Megadeth are part of the Big Four in terms of groundbreaking thrash metal bands along with Metallica, Anthrax and Slayer so they really do deserve to be playing to big audiences. However, it seemed to me that the group would fare better in a small sweaty club than onstage in such a large venue (the Budweiser Stage has a capacity of 16,000 people). Part of that has to do with Megadeth frontman Dave Mustaine‘s lack of stage presence. Of course, he is the figurehead for the band but onstage, he seemed to be stuck in one spot largely restricted due to handling the lead vocals and at times complex guitar solos. While Mustaine‘s grimaces and occasional hand movements while singing showed that he was quite into the songs, I doubt that this would have translated well to someone who was far away from the stage in the 400 section or lawn area. There was also little interaction between Mustaine and the audience. When Mustaine did speak to the crowd, it was very difficult to decipher what he had to say, which was also the case with his singing on that night. Funny enough, bassist Dave Ellefson addressed the crowd late into the band’s set and it was obvious that he should have done more of that as he seemed much more dynamic and comfortable in addressing the crowd than the seemingly introverted Mustaine.

When you’ve been around as long as Megadeth have been and are only limited to ten songs for your set, you know that the set is going to be a great one and it was. Mustaine and company covered a good chunk of their early discography with one song (“Mechanix”) from the debut Killing Is My Business… And Business Is Good!, one (“Peace Sells”) from Peace Sells… But Who’s Buying? (I miss those witty album titles), four (“Hangar 18,” “Take No Prisoners,” “Tornado Of Souls” and “Holy Wars… The Punishment Due”) from Rust In Peace, two (“Sweating Bullets” and “Symphony Of Destruction”) from Countdown To Extinction and one (“A Tout Le Monde”) from Youthanasia. There was only one song played (“Dystopia”) from Megadeth‘s last nine studio albums, which tells you all you need to know about the difficulties for ’80s era metal bands to push and promote their new material in the last twenty years.

I was thoroughly impressed with guitarist Kiko Loureiro‘s stage presence and guitar playing abilities. Loureiro could have likely dominated even more if he wasn’t relegated to one side of the stage for most of the group’s set. Overall, Megadeth put on a good shows and I was happy to see them even if Mustaine‘s vocals were difficult to hear. I can only wonder just how good 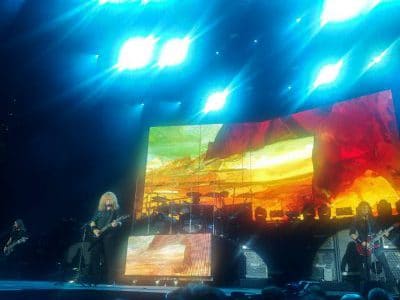 Megadeth could have been had they had a more powerful singer to handle the lead vocals since their inception.

Despite the deja vu feelings that I encountered throughout the Scorpions‘ set, it was still fun hearing and seeing the band’s stalwarts — singer Klaus Meine and guitarists Rudolf Schenker and Matthias Jabs — along with the seemingly replaceable band positions held by bassist Pawel Maciwoda and drummer / newcomer Mikkey Dee. Taking into account that both Schenker and Meine are each 69 years old, their performance was truly remarkable. In fact, Schenker performed and moved like a young man in his ’30s ran than a man about to enter his eighth decade next year. Schenker is simply in remarkable shape for his age. Meine seemed a lot more cautious with his movements but still moved around a lot more than many frontmen who are 20 years younger than him. Jabs was all smiles while playing which showed just how much he loves being up onstage. Maciwoda looked like he was enjoying himself onstage as well and knew his role to give center stage to the elder statesmen of the band. Mikkey Dee  looked to fit right in with the band and seemed to have been with the group for many years rather than the short time that he’s really been in the band. 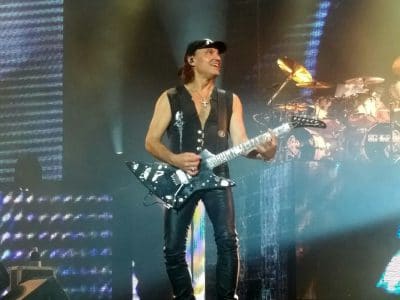 As I reviewed the setlist from the Scorpions‘ last visit to Toronto in 2015, I was really surprised to see that it was almost the identical setlist this time around with the notable exception that “Dynamite” was replaced by “Overkill” which was the group’s tribute to Mötorhead‘s deceased frontman Lemmy Kilmister. From that perspective, it was a disappointing setlist. I read in a recent interview done by Jabs that the group plays “Coast To Coast” to give Meine a vocal break but if that is truly the case, why is it always the fourth song played? The first time that I noticed that the stage set and setlist were virtually the same was when the stage backdrop showed the Canadian flag which I remembered from back in 2015. By the time that the Scorpions embarked in their ’70s era medley of four songs, I knew that I was seeing the same show from two years ago. As I previously indicated, Iron Maiden did the same thing playing the same setlist and bringing the same stage show to Toronto two years in a row. The big differences are that Iron Maiden kept the same tour name and advertised that this was the last chance for people to see them on The Book Of Souls World Tour. 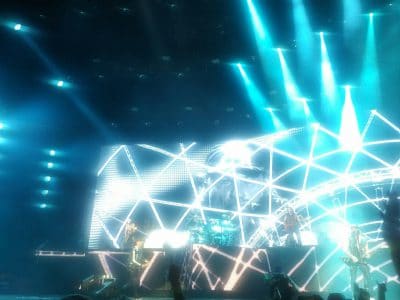 This is Make It Real from the Scorpions concert on September 22 2017 in Toronto’s Budweiser Stage (Molson Amphitheater). Brought to you by T-Mak World www.tm…