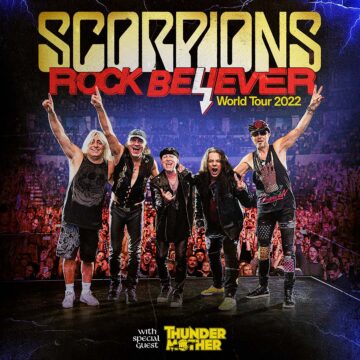 With the announcement of Whitesnake dropping off this tour several months ago, it impacted the sales in some markets. Not so in Portland, Oregon. I was pleasantly surprised at the near capacity crowd at the Moda Center. It wasn’t reconfigured into ‘the theater of the clouds,’ which splits the 19K arena into less than half of that. No Whitesnake, no problem in Portland at least. It also helped that it has been a number of years since they have performed in Portland.

Back in August, I spoke with Filippa Nässil, the guitarist and founding member of Thundermother, who was enthused about Black And Gold. “We were so proud of Heat Wave. It was our best album so far. We loved it and were so proud of it. How could we beat it? We just decided we’re going to beat it! Every song is a hit!” She’s not wrong. Black And Gold is a very strong effort and has matched Heat Wave, if not topped it. Nässil was also very excited about the [then] upcoming tour supporting Scorpions. She added “We will get a little more time with Whitesnake dropping off the tour. I think we’ll be doing two more songs in our set.”

Thundermother hit the stage promptly at 7:00 PM and blasted through an 11 song set that seemed shorter than it really was, mostly because they put on such an energetic, charismatic and powerful performance. I wanted to see more. I was pleased that by the time Thundermother hit the stage, the arena was at least 50% full and a couple songs in, more and more people started trickling in. By the end of their set, the venue was close to 70-75% full. I have witnessed many a band go on first to a few hundred people in the audience. I’m sure that can’t feel good.

Thundermother have a new album that was released a few weeks before the tour kicked off. It’s titled Black And Gold. It’s brilliant and they selected the tunes “Watch Out,” “Black And Gold,” “Loud And Free,” “Try With Love,” and “I Don’t Know You” to play live. The new album was well represented. The songs that went over best with the audience were “Loud And Free” and “Black And Gold.” The 2020 Heat Wave album was also well represented with “Back In ’76,” “Dog From Hell,” “Driving In Style” and “The Road Is Ours” (the latter song from the Heat Wave Deluxe Edition album).  “Back In ’76” and “Dog From Hell” probably went over the best with Portland audiences as they really came to life during those two performances. A couple songs from the 2018 Thundermother album represented the record, set opener “Whatever” and “We Fight For Rock ‘N’ Roll.” Thundermother received a roaring send off as they left the stage. As a side note it was surprising that our photographer was not issued a pass to provide photography for this review. 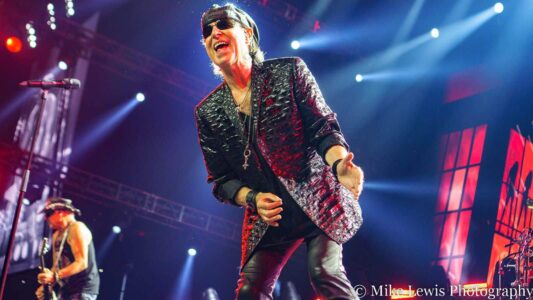 As Klaus Meine mentioned a quarter of the way into the set, “It’s been many years since we’ve been back in Portland.” He’s right. The last time they were in the city limits was on their Unbreakable Tour. They were supported by Tesla at the time and put on a phenomenal show. The next closest that they’ve come was in Ridgefield, Washington with Dokken supporting. There’s a write up in the Sleaze Roxx archives somewhere from 2010.

Fast forward to the present time, Scorpions released Rock Believer, a solid effort in February of 2022. While they didn’t reinvent the wheel, which they never do, they didn’t try to be ‘current’ like they did on some of the late 90’s 0r 00’s albums. Scorpions instead elected to go ‘old school’ and plagiarize themselves! When Scorpions announced they’d be headlining an arena tour to support Rock Believer, I didn’t think it would be sustainable. When Whitesnake dropped out, there was even more doubt. Scorpions might have not sold dates out but the tour sold respectably well and with the stop in Portland on October 9th, 2022, four dates remained and undoubtedly those shows would remain on the itinerary. 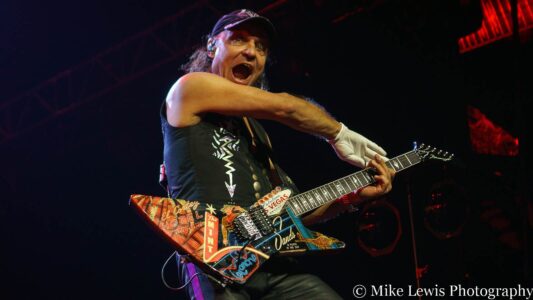 Scorpions aren’t like most ‘legacy’ acts. They know 90% of the audience are there to hear ‘the hits.’ Scorpions are however not afraid to inject some new material into their set when promoting a new album. On this tour, we got four tunes from Rock Believer. They opened with “Gas In The Tank” which got the crowd going, “Seventh Sun” which is one of the highlights from the new album, “Peacemaker” which was a surprising selection that took up space for a classic or a deeper track, and the title track “Rock Believer” which was fantastic, spot on and went over brilliantly with the fans. Then there were ‘the usual suspects’ — “The Zoo,” “Coast To Coast,” “Bad Boys Running Wild,” “Send Me An Angel,” “Tease Me Please Me,” “Blackout,” “Big City Nights,” followed by encores “No One Like You,” and “Rock You Like A Hurricane.” The aforementioned has been done to death, but it is a signature tune, so it will always make the set. Scorpions ‘tweaked’ “Wind of Change” and changed the song adding an Ukraine spin to it. I’m not a fan of that. Keep it as we know it or take it out of the set. God knows Scorpions have so many more ballads they could have put in the set, like “Loving You Sunday Morning.” The band looked great, sounded fantastic, the only suspected backing track sighting was possibly Klaus Meine’s ‘whistling’ on the ‘reworked’ “Wind of Change.”

The show had too many solos, guitars, bass and drum solos, but probably for good reason to give Klaus a breather. While drum solos are passé, gimmicky with roller coasters and such, Mikky Dee shined. It was simple and it wasn’t cheesy. Dee is far more 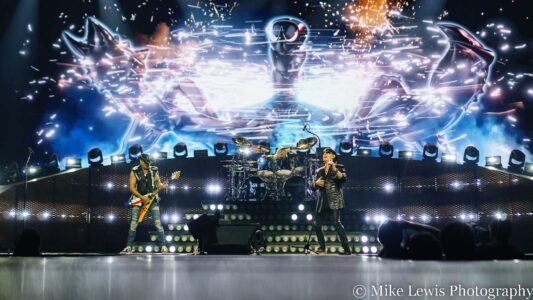 entertaining than former drummer James Kottak and his past stage antics. From the point of Dee’s solo forward, Scorpions ‘repurposed’ the LED screen footage and animation from their Las Vegas residency, which is somewhat lazy and obviously to cut production expenses. Scorpions put on a [as usual] an entertaining show. It was a pleasant surprise to hear “Make It Real” in the set. Klaus isn’t as mobile as he once was. He’s not running around the stage. It’s more of a shuffle, but that’s just fine. The voice is still there and that’s what really matters. 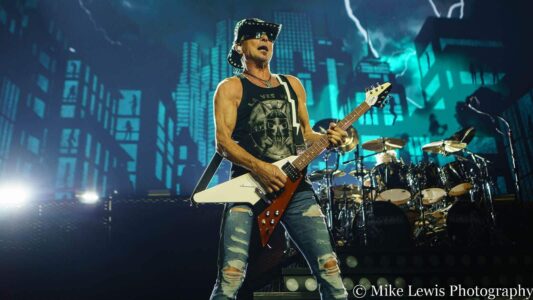 Scorpions performing “Rock You Like A Hurricane” live at the Moda Center in Portland, Oregon, USA on October 9, 2022 (video from nizbah‘s YouTube page):