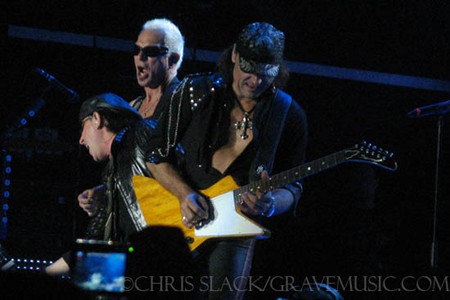 THE SCORPIONS GO OUT ON THE RIGHT FOOT IN WASHINGTON

The Scorpions rolled into the Portland area; Ridgefield, Washington to be exact, about 20 minutes north of Portland, Oregon on August 7th. I’ve been at this particular venue, The Sleep Country Amphitheater, a handful of times and it has the typical shed layout. The sound is adequate if you’re in the seating area, but if you’re on the lawn it varies depending on where you are.

This particular night’s show was sold out, and from what I heard that evening it had been for close to a month — good news for the Scorpions. On paper the amphitheater holds roughly 18,000 people but I would question that there were that many people in attendance given that the Rose Garden holds upwards of 20,000 — but if that’s what they said I’ll have to take them on their word. That said, on this unseasonably cool 68 degree August summer night there were a lot of people there. They varied from 20 something’s, mothers, fathers with their kids, hair metal degenerate burnouts who looked like they hadn’t changed their wardrobe since 1988, and of course how can you leave out the groupie wannabes in their boots, pumps, tight dresses, pants, push-up bras and hair to the sky. 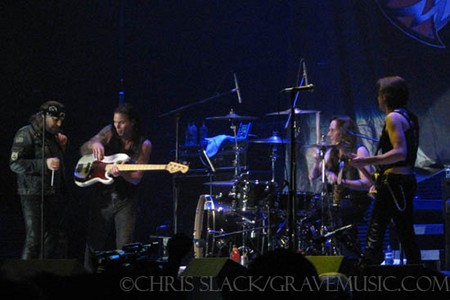 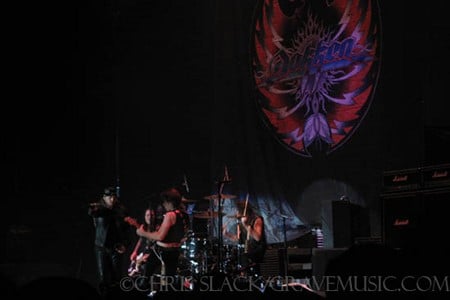 Dokken kicked off the night’s festivities at about 8:00 PM. Don Dokken has been taking a beating in the press and in message boards across the internet lately for his inability to sing these days. I’ll say this, having not seen Dokken live since their stop at The Roseland on their Dysfunctional Tour, I was horrified at the turn for the worse his voice has taken. I’ve seen the YouTube clips, but Don Dokken takes it to another level when you actually see and hear him in the flesh. Aside from Don, this is a band of hired guns as it appears that ‘Wild’ Mick Brown has split to do the Ted Nugent gig full-time. Jon Levin is a great guitarist, but he’s not George Lynch — and to have him play solely Lynch era material has him filling some big shoes all night long. Toward the end of the set Don Dokken mumbled something to the fact that “he wished he could sing all night”… I bet you do Don!

Dokken’s setlist:
Just Got Lucky
The Hunter
Kiss of Death
Into the Fire
Breaking The Chains
Alone Again
Tooth and Nail
In My Dreams

The Scorpions took the stage at roughly 9:15 PM to an audience eagerly anticipating the first note. The Scorpions were phenomenal, charismatic and extremely energetic, they left me and the rest of the audience dumbfounded. These guys are in better shape than bands half their age! It’s really sad to see these guys go, but they are certainly going out on top of their game and on their own terms. Vocalist Klaus Meine sounds fantastic, and exactly like he has the last seven times I’ve seen the band since 1988. I have a feeling that they’ll make it back to these parts at least once more as they will be touring behind Sting In The Tail for the next two and a half years. 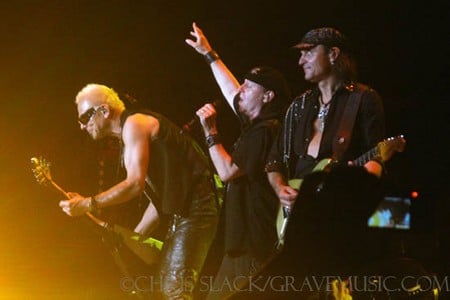 The Scorpions, as always, had a great looking stage and brilliant sound — although I have to add that the PA system did cut out on them for mere seconds during their set. Usually when bands plays new material it falls on deaf ears as the fans head for another drink, the merch booth, or the rest room — however the Scorpions opened with “Sting In The Tail” which went over well with everybody, as did the other two tracks from the new album “The Best Is Yet To Come” and “Raised On Rock”. Among the new tracks there were the usual suspects “Bad Boys Running Wild”, “The Zoo”, “Blackout”, “Rock You Like A Hurricane”, “Big City Nights” and “Wind Of Change” — it was all the hits and then some. The highlights in my opinion were “Sting In The Tail”, “The Zoo” (which has more crunch live), “Big City Nights”, “Bad Boys Running Wild”, “Blackout” and the trio of ballads in succession; “The Best Is Yet To Come”, “Wind Of Change” and “Holiday”. I have to say that the day of the drum solo has come and gone, as James Kottak‘s antics lead to people racing for the pissers before the next song — although that was not the case for the guitar solos on “Six String Sting”.

The night hit a bump when the band invited Don Dokken to join them on “No One Like You” — the feeling was similar to having someone stuff the back of your t-shirt with a fist of crushed ice from the concession stand. Get it? They Scorpions closed the show Dokken-less with “Rock You Like A Hurricane” to a standing ovation by all present — and it looked to be nearly all that were there at kick off. If you have a chance to see the Scorpions before they retire do so, because you’ll never see another band keep it together musically, physically and creatively for 40 plus years while keeping it at this level. 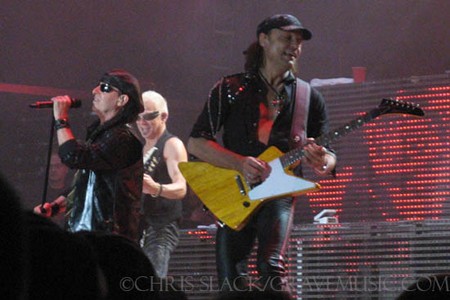 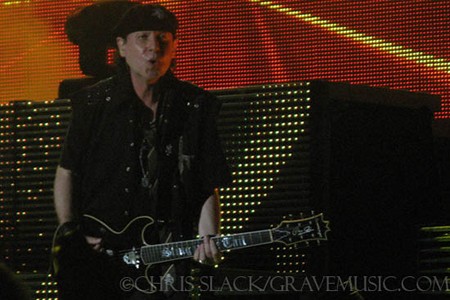