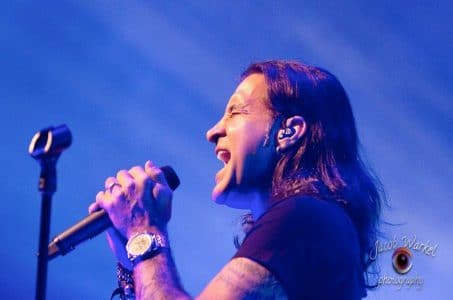 On this night, Scott Stapp, the voice of Creed, was back again at the Arcada Theatre but this time unplugged. Scott who currently is the lead vocalist for Art Of Anarchy which features Ron “Bumblefoot” Thal on guitar, had Ron on guitar duties in his band for this unplugged tour. Scott had killer success with Creed from their debut studio album My Own Prison, which launched him into having a great music career. Creed went on to record a total of four studio albums but never completed their fifth album they they were working on. Scott entered rehab to battle his addictions to alcohol and drugs many years ago. Scott Stapp has been battling his addictions for many years now and also is working every day to continue his sobriety. Scott surrounds himself with great people such as his bandmates, as Bumblefoot said to me earlier before the show today “We are a sober band — no drugs or alcohol.” The temptations on the road have got to be difficult but if you surround yourself with strong individuals that are on the same page as you, it can make things rather easy and comforting on the road. 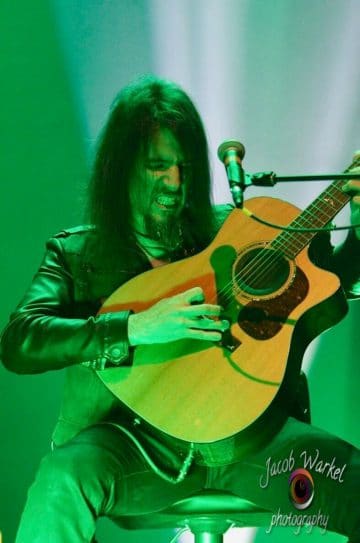 Scott’s fans were starting to fill into the venue as the stage hands were preparing the stage for what would be a powerful acoustic performance on this night. Many of the fans had traveled from surrounding states to see this performance, which shows great loyalty to Scott Stapp. The cheers and screams from the crowd could be heard now as Scott Stapp took the stage with his bandmates and wasted no time belting out “Are You Ready” from Creed’s 1999 release Human Clay and then “Bullets” from the 2001 release Weathered. Both songs sounded great vocally, musically and acoustically, but the drive for these two songs was lost. The essence of the true feel of those songs just didn’t come across as powerful when they were played acoustically.

“My Own Prison,” “Unforgiven” and “Torn” were the next three songs in the set. They are all classics and songs that charted well from the 1997 release My Own Prison and which put Scott Stapp and Creed on the map. Those songs not only kicked ass tonight for an acoustic set but will always be hits. Watching the fans sing along and getting into the music, you could almost see in some of these fans where they may have been or what they may have been going through at the time when these songs were released and possibly the cure some of these songs might have had on some of these individuals. Being a Jim Morrison fan and all, Scott Stapp seems to enjoy playing “Road House Blues” as he has done this song for so long live and does an excellent job. It’s always a great party song even if you don’t party with drugs and alcohol. “One” of course just killed Scott’s vocals, which song after song, sounded just powerful and moving all night. The whole set was comprised of sing along songs and that’s what the crowd did once again. 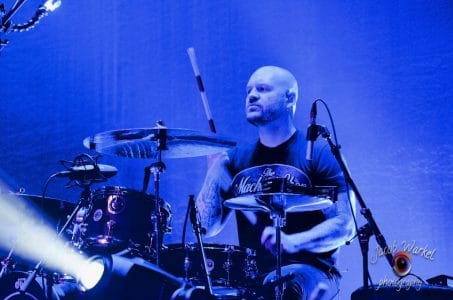 “Arms Wide Open” became a very special song for a kid in the crowd as Scott Stapp dedicated the song to this boy as it was the boy’s ninth birthday on this evening. A great response was given from the crowd. This boy also spent his time right up front of the stage in front of Bumblefoot most of the night just singing along and enjoying every minute of this concert. Prior to the band starting “Higher”, Scott introduced the band and then once the song started, before you know it, you could hear everyone in the venue singing along. Scott definitely moves people with his vocals. All night, there was something about him that grabbed you and that was something special. The band exited the stage, the lights stayed dim and you just knew that it was encore time. Yes, the crowd was loud and letting Scott Stapp know that the show was not over. Scott and his bandmates returned to the stage to finish the night with two more songs, the first being “One Last Breath” and then “My Sacrifice” which killed. The crowd hung on every word as they pretty much had done the whole night on all the other songs. The crowd participation was not an issue at all on this night. Scott Stapp and his bandmates performed and delivered a great set for these fans. 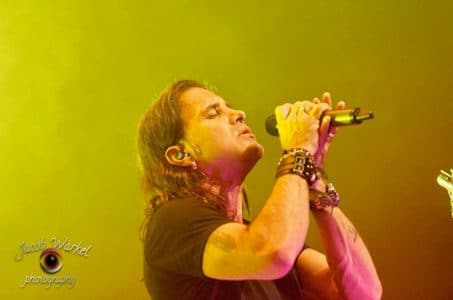 Scott’s energy was felt instantly while even sitting on a stool, but for myself, I’m still confused why he would do a “Live and Unplugged” tour as if I were a die hard fan, I would want the full blown distorted guitars, loud ass drums and so on. If anything Scott should have done a regular tour with a three song acoustic set thrown in maybe at the 3/4 mark into the set. I’m not bashing the show as it was great. Scott’s powerhouse vocals are bar none in your face incredible, acoustic or not. Scott’s passion emotionally comes out regardless but you miss the backbone of the music playing acoustic. The last time Scott Stapp played here at Arcada Theatre, it was a sell out, but on this night, it was not. I don’t like the excuse that it was not sold out because it was a holiday weekend as some fans claimed because other fans I spoke with disagreed and said that the live acoustic show kept many of their friends from coming out and supporting this tour. Some other fans I spoke with were hesitant themselves on coming on this night. All and all, the fans came from down the street to hours away from other States just to see this show and no matter what, you can never make everyone happy. 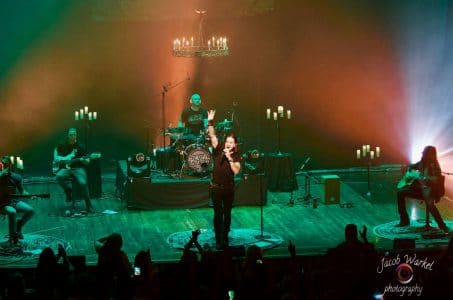 Those who came out on this night were not disappointed and if anything, were thrilled as most were able to purchase the actual live performance of the night that just took place on CD with a portion of the proceeds benefiting ChildFund International! These high quality double CD sets were ready immediately after the show. You could literally walk out with what you just experienced. Also, Scott offered that, for those who would go out in the lobby and donate to the ChildFund International foundation on this night, he would personally shake your hand and thank you and pose for a picture with you. Many of the fans never expected to have that opportunity on this night to meet with Scott Stapp so of course, Scott had a great response and a lengthy line ahead of him. Regardless if you like Scott Stapp or you are a fan of Creed, get on out and support this “Live and Acoustic Tour.” It is not going to disappoint you. 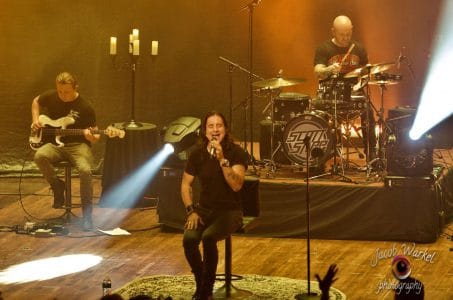