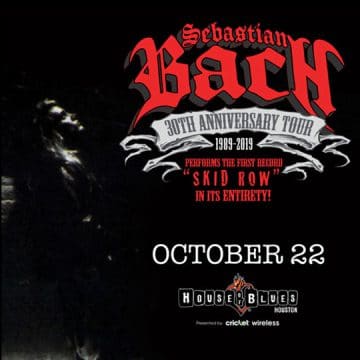 I kept thinking about this show. There are a million reasons not to go. It’s a Monday. I got work. The World Series game is on. The traffic downtown is going to be awful. Blah, Blah, Blah. Two reasons to go. The last time I saw Sebastian, he kicked ass. The second reason is that you get one trip on this planet and life is too short. So yesterday afternoon I decided to buy a ticket, and boy I am glad I did. WOW! What made it even better is that he picked an amazing Canadian band Kobra And The Lotus to open for him. Just an amazing show. If you haven’t seen this show, I encourage you to get a ticket and not miss one minute. So, glad I went. The place was pretty fully packed on the lower level.

Kobra And The Lotus:

What is cool about this is that I had no idea who or what a Kobra And The Lotus was. I just didn’t. What amazes me is that after some research, I found out they have been around since 2009, with six full-length albums and an EP. Had it not been for this 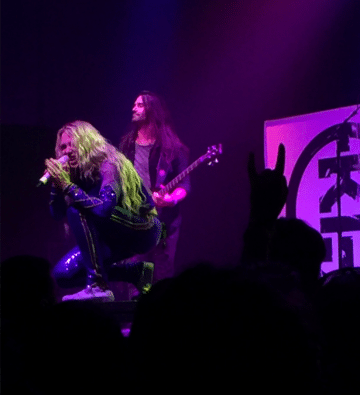 show, I would still be in the dark. But, I was super interested after checking them out on iTunes before the show and had determined I was not going to miss this. Led by Kobra Paige, this female juggernaut stands toe to toe with the greats — Pat Benatar, Doro, Lzzy Hale and Amy Lee. She just brings it. Soaring, powerful vocals, delivered with fire and grit — amazing. The band was phenomenal with blistering guitar leads and a rhythm section that pounded like a freight train. Song after song, they pushed through. I was surprised at how many Kobra fans there were. People singing along to the songs. Kobra is electric, energetic and a true showperson. If they are anywhere near you, you need to see this show. You won’t be disappointed with or without Sebastian. They gained a huge new fan. I apologize, since I am a new, totally new fan and unfamiliar with some of the music, I didn’t get a complete setlist… I do know that they played songs from the albums Prevail I, Prevail II  and their new album, Evolution.

Kobra And The Lotus performing live at the House of Blues Houston in Houston, Texas, USA on October 22, 2019:

Footage of Kobra and the Lotus’ performance at House of Blues in Houston, TX on Oct 22, 2019.

The reason we all came. I have seen Sebastian several times. People say this or that and the other thing about Sebastian, but I have never ever known him not to deliver, not to give us his all. And the last time I saw him was in a smaller place with a quarter of the crowd and he gave his all that night. Look, all I can say about last night at the House of Blues in Houston with Sebastian Bach is WOW, WOW, WOW. So glad I made the decision to go.

I will also preface this with, look, I am a fan of his former band. With him, without him, Johnny Solinger or ZP Theart. They kick ass. And Sebastian is freaking amazing on his own as a solo artist. Their deal is their deal. Whatever happened between Snake, Rachel and Sebastian, we don’t know and I don’t take sides. There’s all their versions and then there is the truth. I wasn’t there and you know what… Life is too short. So I bought the ticket to hear a person whose music has brought me so much joy all these years… and still continues today with his solo music. Now, on with the review. 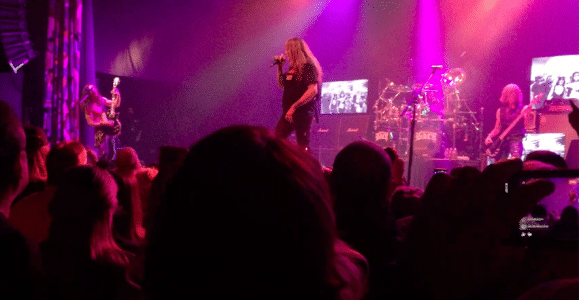 There are no disappointments here. I could have ended the review with WOW, WOW, WOW. Done. Out. From the first chord, the power and intensity, this show was on! Sebastian was in great shape. Sharp. Entertaining. Engaging with the audience. You felt like you were hanging out with your best friend. He is so funny and also a little goofy sometimes…. But it makes you love him even more. He’s a tremendous showman that put everything he had into every song for this Houston crowd. The atmosphere was electric. The tour he is doing right now is to commemorate the 30th Anniversary of the release of the first Skid Row record. His able body bandmates led by the always thrilling Brent Woods were spot on. Hammering out every note and song with precision. Full of life and bringing it one right after the other, never a dull moment.

They started out with “Tornado” / “Forever”… and then he turned and said, “Happy Anniversary! I will be your tour guide for the trip this evening.” What a trip it would be. Announcing that they would be playing the entire first Skid Row record. I mean it’s been 30 years. Sometimes you forget how awesome that record was, how many hits, videos, and even the filler songs. From the get go, Sebastian and the boys blazed right through with of course that lovable insatiable banter in between the songs. It was a delight. In the middle of the set he said, “This completes side one. And what do you do when side one is over?” He walks over and rolls out a table with a record player / turntable on it. “You gotta what?” The crowd screams, “Flip it over!” So much fun and so many memories. He picks up the record off the turn table… and flips it over and drops the needle and the band is on cue… firing it up again!

Sebastian Bach performing “Here I Am” live at House of Blues Houston in Houston, Texas, USA on October 22, 2019:

Hammering one after the other through side two, obviously highlighted by the cell phone, flashlight lit “I Remember You.” The crowd sang every word to nearly every single song. Even the non hits. Wow. Then side two was done and he said the Anniversary tour had ended. He asked if we were done, maybe it was it too late, or did we want to rock some more…. The place went crazy! Off we went again… rocketing thru of course… he was not getting out of there without “Slave To The Grind!” And he just kept coming! — “In A Darkened Room”, “The Threat” and finally “Monkey Business.” It was a full on Category 5 Rock Show! BAM! For all the naysayers, etc, out there, I don’t know… Man, he hit 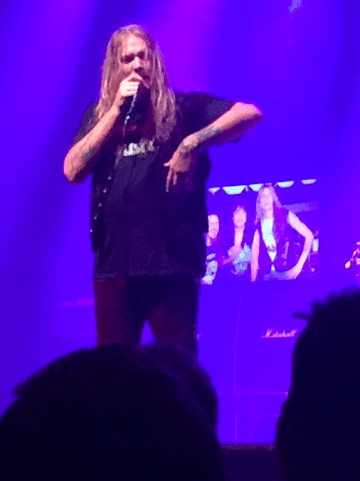 every single note. He hit notes only dogs can hear and left everything out there on the stage. I am so glad, so glad I went. My Monday was made better, my week was made better and I got a whole bunch of great memories for a lifetime. Catch him whenever you can.

Sebastian Bach performing “I Remember You” live at House of Blues Houston in Houston, Texas, USA on October 22, 2019: