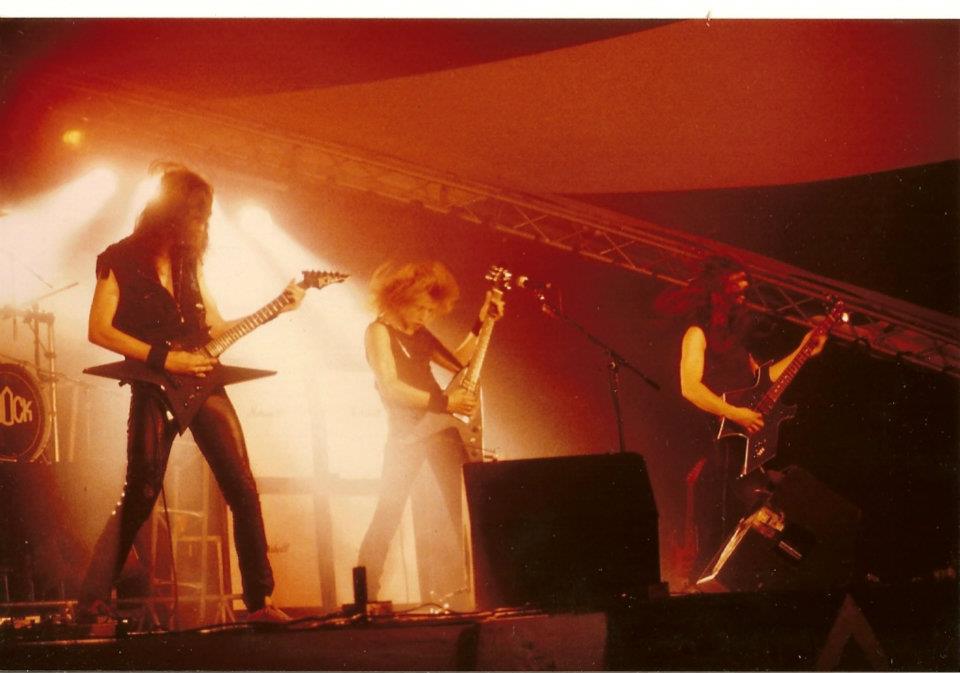 Some of you may be thinking… who is Shock? If you were living in Canada’s national capital in the mid to late ’80s, and liked heavy metal, the odds are high that you were familiar with Shock. They were one of the best metal bands never to release an album, until recently, in May 2013, when the group reformed after an absence of 21 years and finally released their debut CD ‘Once Denied’.

Back when I was growing up and engulfed in the heavy metal music wave of the ’80s, I considered Shock on par with power and/or thrash metal giants such as Megadeth, Metallica, Helloween and Iron Maiden — except that Shock were a few years behind them, did not yet have a record deal, and any songs that I had from Shock were poor quality demos taped from one cassette to the next. To illustrate how big Shock was back in the mid to late ’80s, the unsigned power-metal band was headlining shows such as the Gloucester Fair in the greater Ottawa area when other more established acts — with a number of albums to their name such as the “Metal Queen” Lee Aaron — were doing so at the same venue on other nights. This also speaks to how big that the metal genre was back in those days. What made the Gloucester Fair shows extra special was that they were outdoor concerts and free, as far as I can recall, to any Gloucester Fair ticket holder. These shows were also my first taste of outdoor concerts.

At the time of Shock‘s Gloucester Fair show in 1987, the band had recorded demo tapes in each of the two preceding years and was on the verge of releasing later that year their most well known batch of demo songs entitled ‘Burning A Hole Through The Heavens’. Interestingly, all of the tracks except one on that later batch of demos were eventually reworked and recorded for Shock‘s debut CD ‘Once Denied’ twenty six years later. I would say that Shock was getting close to the peak of their popularity during the time of this Gloucester Fair show. As the sun set down and dusk fell upon a beautiful evening in June, and just prior to the band members hitting the stage, you could hear the crowd chanting “Shock! Shock! Shock!”

The band members in Shock for the Gloucester fair show — lead vocalist and guitarist Tony V, guitarist John Tennant, bassist Kevin Monette and drummer Andre Action — all had the “cool look” of the classic power-metal bands at the time, both on and off the stage — tight jeans or leather pants, tennis type shoes, leather jackets, jean jackets, and black t-shirts or tank tops. One of the band’s road crew at that time was none other than Shock‘s later guitarist (in 1990) and current bassist Steve Monette. 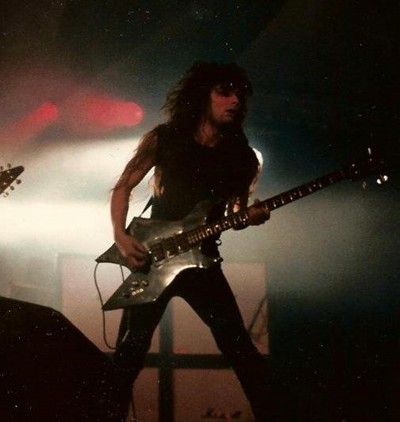 To the crowd’s delight, Shock performed many of their songs that would later turn up on the 1987 ‘Burning A Hole Through The Heavens’ demo and the 2013 full-length album ‘Once Denied’ — including “Full Speed Ahead”, “Driven To Kill” and arguably their most popular song “Slashing To Live”. Shock also performed many songs that did not make onto ‘Once Denied’, including “Exocet” and “Born At Night”. Those latter songs were just as good as the ones that were eventually released in 2013 so there is no doubt that Shock still has plenty of great songs that they could release from their ’80s era past. As was almost always the tradition with a Shock concert, and especially when the band was headlining, a number of cover songs were included later in the set. On this night, the covers included blistering renditions of Metallica‘s “Phantom Lord” and “Seek & Destroy”.

After the Gloucester Fair show in 1987, I thought that I had just seen the next band about to hit the big time alongside Metallica or Helloween since Shock had put on such a strong live performance and had such great original songs. You can imagine my dismay when I heard through the grapevine sometime in 1990 — because that is how news travelled back then with no internet to speak of — that Shock had disbanded without even releasing an album. When you think about what happened to the metal genre a little later as a result of the grunge invasion in the early 1990s, Shock likely correctly forecasted their future in the next few years by calling it quits at that time. That being said, it is fantastic to have the band back together and rocking again, and hopefully they will be releasing a few more CDs of their own brand of power-metal in the coming years.

** A big thank you to Steve Monette of Shock for providing the photos and filling some gaps for this Retro Concert Review.