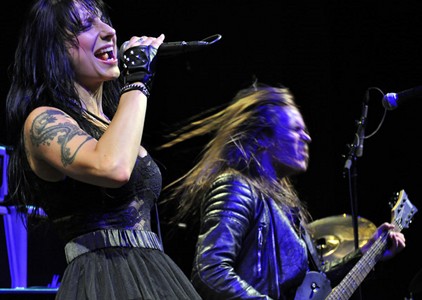 She’s fit, she’s fine and she’s fierce. Liv Sin is an all out assault on the senses and is making her case for the most powerful female voice in metal.

Just over a month after the release of ‘True Sound Of The Underground’, Sister Sin‘s second release under Victory Records, the four-piece firehouse from Gothenburg, Sweden, opened for the Michael Schenker Group before a packed house at the modern and intimate Showcase Live in Foxboro, Massachusetts. 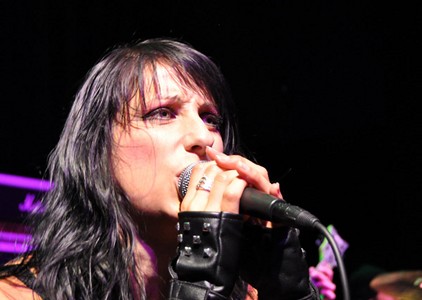 Drawing influence from the likes of Motorhead and Motley Crue, Sister Sin‘s sound hearkens back to the glory days of metal while leaving power ballads tucked away with the zebra-patterned spandex. “No ballads. It’s our policy,” said Liv. A policy the band has taken seriously since forming in 2003 — and one that breeds trust with their fans, who can feel confident listening to the band without waiting for the seemingly inevitable brake job. Sister Sin gives metal-heads hope for the future. No filler and no ballads; just straight ahead, horns up, kick ass rock.

Clad in a black lace top, mini skirt and high-heeled boots, Liv delivered a vocal punch in the gut with a confidence and attitude that made it hard to visualize her taking direction from a photographer in her modeling career or having the patience, as a personal trainer, to deal with some flabby schlub. She acknowledges that it’s harder for a woman to gain respect in metal – a notion that only seems sharpen the attitude.

Sister Sin doesn’t take the stage, they attack it. From the opening “Sound Of The Underground” to the closing “Love/Hate,” the band kept the hammer down with Jimmy Hitula‘s hard-driving, crunchy guitar played over a solid foundation laid by drummer Dave Sundberg and Rick-y from Babylon Bombs (Benton Wiberg‘s temporary replacement on bass). Wiberg recently left the band due to ‘touring issues’. 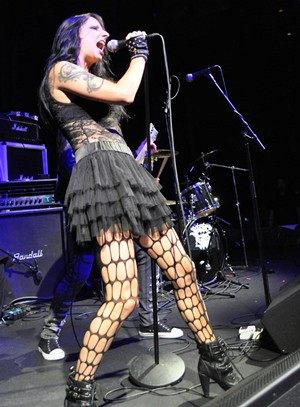 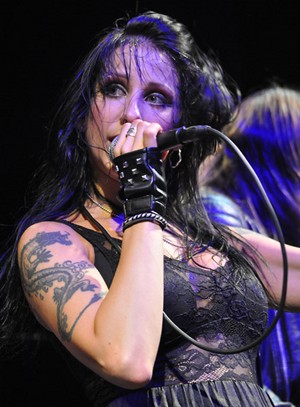 Despite trying to cram as many songs as they could into their 30-minute set, Liv did take a minute to gauge the crowd’s interest in Motorhead, who the band toured with in 2009; mass approval led to a blistering cover of “Make My Day.”

Having familiarized myself with ‘Underground’ and their 2008 release ‘Switchblade Serenades’, made crowd-watching one of the true pleasures of the evening. I talked with a bunch of Schenker fans who were unfamiliar with the opening act and weren’t sure what to expect. By the time Hitula ran through the opening riff of their third offering, “Better Than Them,” horns and fists were in the air and the chorus spread through the venue like the plague. Other highlights included “Outrage,” “One Out Of Ten” and U.D.O.‘s “24/7.” The only disappointment of the performance being it was far too short on time.

With a couple of solid releases and four years of touring under their belt, Sister Sin have proven they have the sound, work ethic, attitude and energy to claim their place atop a resurging old-school metal scene. Buckle up when this band begins headlining. 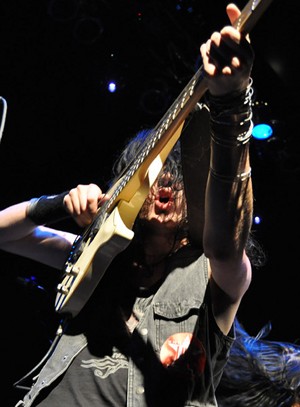 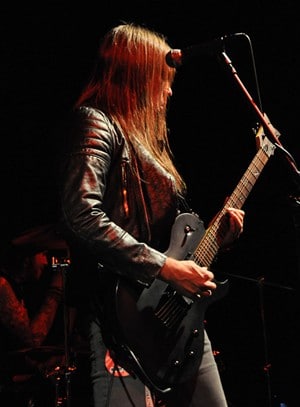