SLASH FEAT. MYLES KENNEDY & THE CONSPIRATORS DO THEIR BEST TO SOUND GOOD IN A POOR SOUNDING ARENA 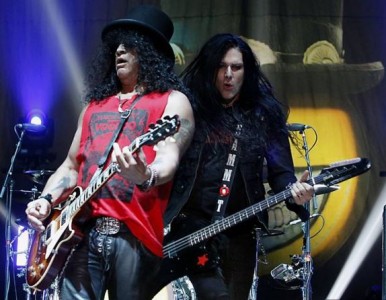 re shot in regard to their live performance. I probably did, and I will do it again in regard to one Saul Hudson, also known as Slash. The legendary guitarist after years of ignoring my country now seems to visit us nearly on a yearly basis. And each time, he chooses autumn, which is cool with me, as there is nothing to warm you up like an energetic, fiery rock concert.

This year the GNR alumni decided to visit Lodz, a very industrial town. The venue, Atlas Arena, is a brand new building, but surprisingly it was the only thing that put a shadow over this concert. But I will come back to this later. What struck me first was the very raw and simple stage set up. No big screens, no huge li 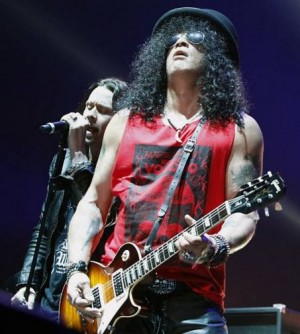 ghts, no pyro tech set up. I guess the band decided to focus on just the music really. And I’m okay with that if the music defends itself. And in the case of this gig, the music did — and it did with ferocity!

The band started with a very energetic “You’re a Lie” which was the first single of the group’s record Apocalyptic Love. And they did not stop much after that. The “softest” song I recall was “Back to Cali” during which there was a polish national flag displayed by the band as I guess a sign of sympathy, if not a bit of pandering, to the crowd. The set list in my opinion consisted of really strong numbers. It was split around 5/ 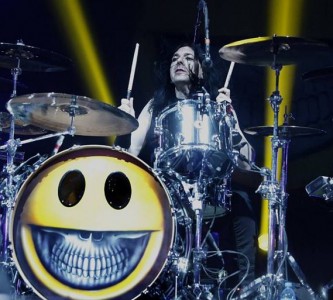 20 between the GNR crowd pleasers and Slash’s very own material, all of that coming from his last three releases. In my opinion, that is actually cool that the band promotes its own material rather than riding the coattails of Slash’s legendary breakthrough act.  It was also no surprise to me that Myles 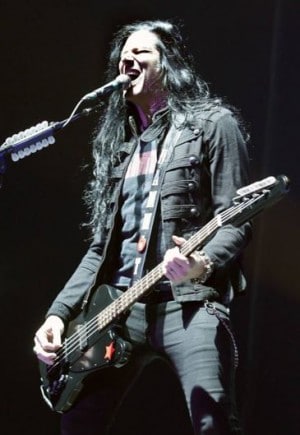 Kennedy’s performance would be top notch. Etched in my memory are Axl Rose’s last live shows but it is almost a common thing now that Kennedy is a technically a much better vocalist. Some say even that he does a better Axl than Axl himself nowadays with the GNR material.  The other guy that jumped in the vocals for one song — “Doctor Alibi” which was originally sang by Motorhead’s Lemmy on the studio take — the bass player Todd Kerns also killed it. A big surprise to local fans was the performance of “Sweet Child O’ Mine” during which the band were joined by a local pop sensation Dorota “Doda” Rabczewska, who is Poland’s main scandal provoking, pop-rock diva with killer looks, and a significant amount of attitude. What differs her from a majority of pop singers however, is that she has a really good, well trained voice, which she displayed while singing GNR’s evergreen. I encourage everybody to check out the performance on Youtube, and judge for themselves. I think she did better than the Black Eyed Peas’s Fergie who used to sing this one more than a few times live.

But let’s not forget about the real lead singer of this show — Myles Kennedy — who also did a great job interacting with the audience, as Slash was really into himself, and concentrated on playing guitar. The rest of the band went a similar way, focusing on playing rather than any crowd pleasing. That seemed absolutely fine with the audience as Kennedy was making it up for 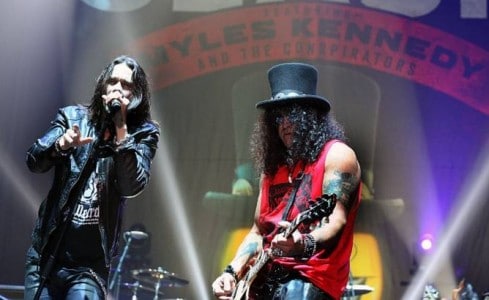 everyone in interaction, while the rest of the group delivered a terrific instrumental experience. But what about the music itself? The musicians absolutely stood up to the challenge, but does it mean this was a gig made in heaven? Here we are coming back to the venue. Compared to the show Slash and company played last year in Poland, acoustic-wise everything was regrettably of much poorer quality. I don’t mean it was bad. But again, if you’ve been to the band’s show last year, the sounds and the acoustics were at least few notches down. It seems that the venue, although very new and polished, really sucked in the acoustics department. What really stood out was a huge overload of bass. So you could really enjoy Todd Kerns’ stellar bass lines, but they overwhelmed the rest of the band, and most importantly Slash’s guitar work in a lot of places.  So all in all, it was almost a very good gig, but one that would have been deemed a very good one if the venue wouldn’t have killed off some of the sound quality.