SLASH FEATURING MYLES KENNEDY AND THE CONSPIRATORS GIVES THE CROWD ITS MONEY’S WORTH IN RAMA, ONTARIO, CANADA 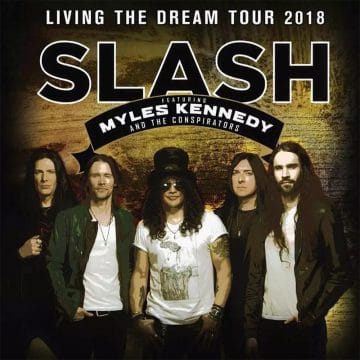 For those of us who live in GTA (Greater Toronto Area), getting to a venue an hour and a half away on a Thursday evening can be a tedious task especially if you have to work the next morning. You must always consider the fact that the act playing on such a particular evening must be worth the drive. So this past Thursday night, I made the decision to see Slash featuring Miles Kennedy and The Conspirators at Casino Rama in Rama, Ontario, Canada. Now that’s a mouth full for a band name isn’t it?  Regardless, with that said, I get the logistics of the band name. As the introductions during the show came to be it, was obvious that Slash realizes that it is just not him being in the spotlight. As he was introduced, he quickly grabbed the microphone, standing beside singer Myles Kennedy, Slash announced to the audience, “Yeah, yeah! More importantly on lead vocals, Mr. Myles Kennedy!” At first my reaction to such a comment was that Slash was being somewhat abrasive, but as I drove home that evening, I thought about the fact that Slash, in his own way, was just being humble.

Now you may be asking yourself? Was it worth it to drive all that way? Hell yeah!!! It’s funny too because I mentioned it to an acquaintance as I was about to embark on this very review. He mentioned to me that he was going to see Social Distortion on this very evening. I then mentioned to him of last week’s Slash show. He turned to me and said, “Shitty?” Now I took that comment with a grain of salt considering the fact that he was going to see Social Distortion. Enough said on that subject.

So as I reached my point of arrival after a long drive, I quickly texted my wife and made my way into the Casino Rama. I approached the box office and picked up my ticket. Yes, that is correct. This boy was flying solo. As you’ll come to see later on in this review, me flying solo would not be an issue. As I made my way towards the high intensity security, I noticed Conspirators drummer Brent Fitz was making his way through the lobby of the casino. I stopped to sit briefly and watched as Fitz made sure to accommodate every fan who wanted a photo or an autograph.

I finally decided to head into the venue, I had thought about possibly laying back a bit before being positioned within the confines of the Rama theater for the next three to four hours. As I was about to make my way through the metal detectors, I noticed that it was time to empty my pockets. “Oh shit. This is going to be interesting!” I quickly laid everything into a small, white plastic tray. As I approached the detector, a beeping sound followed me. “Oh damn. I forgot something!” I moved towards the female security guard. She noticed my ticket and media pass, jokingly commenting, “Oh really! The media guy is the one causing trouble!” We laughed and I emptied everything that was still remaining in my pockets. Turns out my metal card holder that keeps my debit card, license and health card was the item causing me so much trouble.

Within minutes, I was finally in the venue. As I walked in, I suddenly noticed two familiar faces. Two old acquaintances that I had not seen in sometime. Since they were a distance away from me, I just went to the merch booth. As I scanned what was being sold on this evening, my eyes focused on the vinyl of Slash’s latest release Living The Dream. As I held my cash in hand, I asked the girl at the merch booth for the vinyl and CD of the latest album. Once the purchase was made, I hunted down my old friends. We decided on a beverage from the bar. As the opening band came on, we continued to converse. It was great to catch up and the simple fact was that I was not familiar with the opener whatsoever. We decided to order another drink and I was keeping a close eye on my watch. As I was standing in the line-up, I ran into more acquaintances. The night was going well. 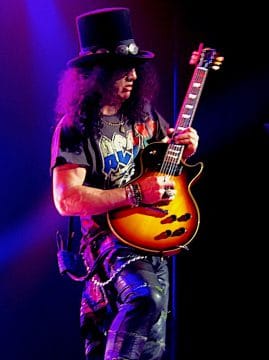 At 8:11 pm, I quickly left the bar area and made my way into the venue. I had four minutes to reach my destination. Stage left, where I would position myself for the first three songs of the set. I was there to take photos for this very review. I introduced myself and within minutes Slash would begin. As I looked to my left, I quickly noticed more old friends coming to say hello. We quickly hugged each other and it was to the front of the stage to begin my work. The band came on abruptly. It became very apparent that Slash, Myles Kennedy and The Conspirators were in fine form. As soon as the three songs began, they were over. I ushered myself past the front row of the audience and high-fived my friends as I passed by.

As I finally reached my seat, I was mesmerized by the band. They really had captured my attention. They sounded so tight. When I was in the pit it was really hard to actually focus on the band as I was taking pictures as were others around me. I would occasionally get bumped, but that did not bother me as we were all trying get as much photo footage as we could in such a short time. Back at my seat, I could take it all in. The band played songs from their first three albums. Some I did not recognize but regardless, the material sounded amazingly solid. It wasn’t until the band broke into Velvet Revolver’s “Fall To Pieces’ that I was able to sing along. It was then announced that Canadian bass player Todd Kerns would be harnessed behind the microphone as Slash and co. broke into “Doctor Alibi” from Slash’s 2009 debut solo album. Of course, originally this song featured the vocal stylings of the late Lemmy Kilmister. When it comes to Kerns, he is hard not to notice. With his jet black hair, tall demeanor and stellar voice, he brought back visions of the mid ’90s when I witnessed his band Age of Electric at RPM in Toronto, Ontario, Canada. Ironically, the night before that show, I had seen Slash’s Snakepit next door at The Warehouse. 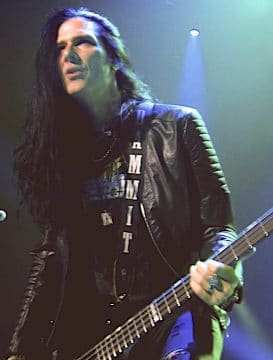 What also stood out to me in terms of Kerns was not only his killer vocal abilities, but the fact that he was wearing a Power Hour shirt. What is the Power Hour? For those who are unfamiliar, it was an hour long, weekly hard rock and heavy metal show that ran on Much Music in the ’80s and early ’90s. Now with all that said in terms of Kerns, the vocal spotlight was clearly on lead singer Myles Kennedy. There are not too many that possess the vocal ability of Kennedy. His performance was very captivating to say the least. On stage he has a quiet presence, but when he sings that is all that is needed to convey his point. He is a true powerhouse of a vocalist. The other two members of the band were drummer Brent Fitz and rhythm guitarist Frank Sidoris. Both did a fantastic job of keeping the crowd in check. Fitz is a fantastic showman who has previously played with John Corabi and Bruce Kulick in Union, as well as playing for former Mötley Crüe frontman Vince Neil. Fitz who like Kerns, is also Canadian, sported a Winnipeg Jets t-shirt. Fitz can truly out drum the best of them. He is a great fit for this fantastic line-up. As for Sidoris, he did not look out of place. His playing was on target. Tight, compact and gritty. Exactly what you’d expect from a guitar player standing next to Slash. He does his job exactly as it should be.

Now, what about Slash? What can really be said? Slash may truly be the last of the true “Guitar Gods” of the ’80s. Sure, there have been others who have received acknowledgements for their skills after him, but most don’t receive Slash‘s accolades. As I 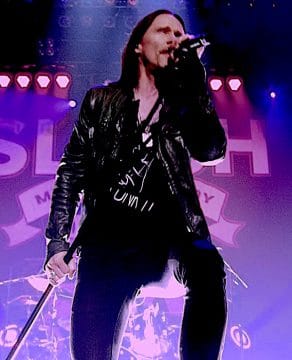 focused on Slash throughout the show, something truly occurred to me. Slash, over time has really changed as a guitar player. I was witness to a vast array of styles and within Slash’s playing. There were times were he would be playing with that warm, harmonious tone that we have come to love since “Sweet Child O’ Mine” and “November Rain.” Then there would be Slash playing, fast, articulated licks running all over the neck and really showing the audience how he had truly grown as a guitar player and musician. Slash, without really saying much vocally, truly spoke with his guitar and the audience adored all that he did.

On this night, Slash featuring Myles Kennedy and The Conspirators would only play one Guns N’ Roses song. Just before the band broke into “Nightrain”, Myles Kennedy proclaimed that the song had just been placed back in the set. The place went into a frenzy. Fans were seen dancing in the aisle ways singing along to Kennedy’s every word. It was truly a moment of epic proportions. This is a song done some 30 years later that has stood the test of time and still gives me the same feeling it did when I was 12 years old. This would be a chance for Sidoris to show off his guitar work as he played the first part of the guitar solo, before Slash broke into the chaotic piece that really stimulated the audience. I’ve always loved it when two guitar players play off of each other. 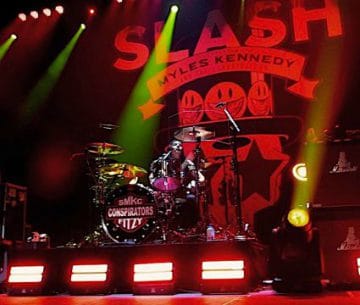 As Slash and co. played a few more songs, it became apparent that the band would leave the stage by 10 o’clock on this evening. Perfect, I’ll be home and in bed by 12. Well, that was not to be. For those that have been to a concert at Rama, it can be attested that leaving the venue can take almost as long as the performance itself. It becomes very congested afterwards as everyone is trying to make their way to Rama Rd. Of course, the police was trying its best to guide the traffic, but it just becomes a complete cluster of chaos. I had actually stayed back and talked to friends for a half hour before leaving. Hoping to beat the rush, but by 10:30 that was still not to be. As I popped the new album into my CD player, I prepared myself for the slow moving traffic ahead. By 12:30 am, I finally walked through my back door, albums, CD and Burger King in hand. My wife was waiting on the couch. We conversed and ate our food as I told her of the evening’s proceedings. I was quick to point out that she had missed an epic and stellar show. Possibly next time she should join me. Possibly? She may have missed the best show of the year, but it’s only October, so that remains to be seen! 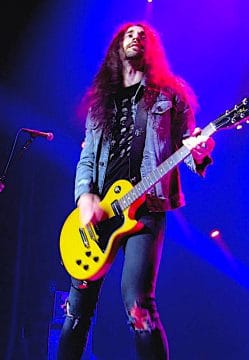