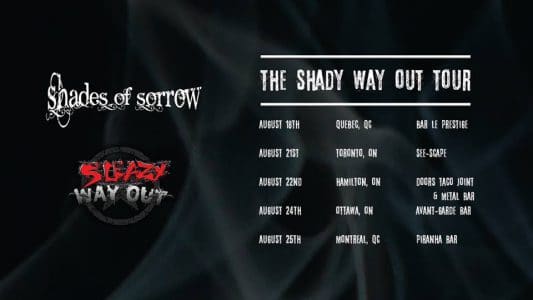 Thank God for Facebook’s news feed! I had totally forgotten that Montreal, Quebec, Canada based rockers Sleazy Way Out were doing a mini-tour of the province of Ontario with stops in Toronto and nearby Hamilton. In late afternoon on Tuesday, August 21st, I noticed a Facebook post indicating that Sleazy Way Out were playing later that night in Toronto! I already had plans that evening (a tennis match in a city interclub playoff league at 8:00 pm) and was trying to figure out whether I could squeeze in Sleazy Way Out‘s gig as well. First things first, I contacted Sleazy Way Out to find out what time they might be playing and they quickly responded back stating “10ish.” Clearly, that wasn’t going to happen with a tennis match starting at 8:00 pm or later. However, mother nature had other plans and the pouring rain that day eventually led to the cancellation of all of the tennis playoff matches for my club on this night. Since I already had a babysitter lined up for the evening, I simply asked whether she could alter her times a little bit and once that was agreed to, I must say that I was quite excited about getting to see Sleazy Way Out live!

I contacted two other people that I thought might be interested in attending as well to see this young up and coming band. The first one was my concert travelling buddy Rich “The Meister” Dillon. Funny enough, Rich reminded me that we had previously spoken about going to see Sleazy Way Out (back in July) and that I had indicated that I would go see them in Hamilton, which was the following night. At first, I was puzzled why I would have told Rich that I would go see Sleazy Way Out play in Hamilton (a 45 minute drive) rather than Toronto. However, upon thinking about it, I must have known about when the tennis playoffs started and of course was fully committed to that so elected to see Sleazy Way Out in Hamilton rather than Toronto. Unfortunately, The Meister could not be persuaded to come out on this night (a rare occasion). I then contact long-time Sleaze Roxx writer Mark Hovarth who I knew was very into Sleazy Way Out. As Horvath pointed out to me in his words, “I love these guys.” Unfortunately, Horvath was not aware that Sleazy Way Out were in town and already had plans for the night. Although he did advise that he would try to make it work, I knew that was likely not going to happen with Sleazy Way Out‘s pretty early 10:00 pm start time.

I am always excited to check out new venues and was curious to see what the See-Scape Sci-Fi Bar & Gaming Café looked like. Given that the greater Toronto area has a population of about six million people, I was also concerned about exactly where this venue was located as it could likely take me one hour to get there depending on where it was located. I was pleasantly surprised to learn that the venue was in the west end of the city and really only a 10 to 15 minute drive for me to get there. I knew roughly the area where the See-Scape Sci-Fi Bra & Gaming Café would be located and despite keeping an eye out for a building sign to identify the venue, I ended up passing it. Upon going back, I noticed the number (343 Keele Street) to the building that would seemingly be next to the venue (347 Keele Street) so I parked my vehicle and made my way towards those buildings. As it turns out, the See-Scape Sci-Fi Bar & Gaming Café did have a large sign but it was on one side of the building. As I walked towards the building, I couldn’t see that sign so just elected to open the door to a building with some lights and what seemed to be some activity inside. I knew that the bands would be playing in the upstairs portion so made my way up the staircase to the upper floor.

The venue where the bands were playing turned out to be a large room with a bar on one end to about one third of the room and a stage at the other end. Although Sleazy Way Out had previously indicated to me that they would be playing at “10ish”, that turned out to pretty much being “10:00 pm sharp.” With my troubles in finding the venue, I ended up arriving just in time for Sleazy Way Out‘s set. 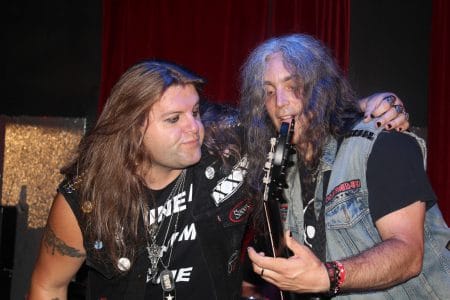 From what I understand, this was the first time that Sleazy Way Out were playing in Toronto and all I can really say is that the band was paying its dues so to speak just like all the great bands have had to do before experiencing “success.” I am sure that there will be more people that will come out to see them the next time they (hopefully) come. I had thought that I had posted a news article on Sleaze Roxx advertising the band’s The Shady Way Out Tour but as it turns out, I had failed to do so. Had I done so, I am sure that Sleaze Roxx writer Mark Hovarth would have been there. So I apologize to the band in that regard. Nevertheless, the Sleazy Way Out band members put on a solid performance and towards the end of their set, they were seemingly having a lot of fun at the same time.

For those who don’t know, Sleazy Way Out play a sort of mixture (to my ears) of early Mötley Crüe / Cinderella type songs. The band members do not know this but their debut album Satisfy Me was going to make it onto the Sleaze Roxx’s Top Ten 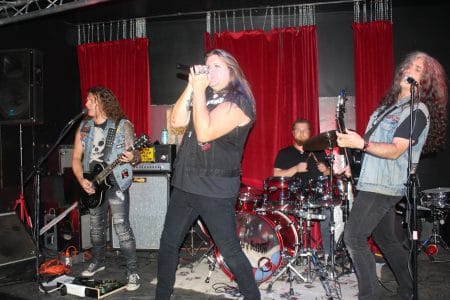 Albums of 2014 (which only came out until July 2015 — I know it was late!) until I realized that the album was released in early 2015 disqualifying it from that year end list. Accordingly, no need to say that I was excited to see the band play live. Unfortunately, the sound seemed a bit muffled so it was a little bit difficult to make out the songs at the beginning. It seemed that the sound issues got better towards the mid-point of Sleazy Way Out‘s set. Although the group is working on its sophomore album and now signed to Sliptick Records, they ended up playing a set comprised of nine of the ten songs from their debut album along with a cover of a song that needs no introduction — Guns N’ Roses‘ “You Could Be Mine.”

Prior to that cover song being played, singer Stacey Sleaze explained to the audience that they almost weren’t going to be able to proceed with their The Shady Way Out Tour because their drummer couldn’t make it. Funny enough, I was wondering at the beginning while watching Sleazy Way Out play whether they had switched drummers because their skin basher sure didn’t look like the band’s drummer Joey Boucher who had been previously featured in a Sleaze Roxx news article. Eventually, 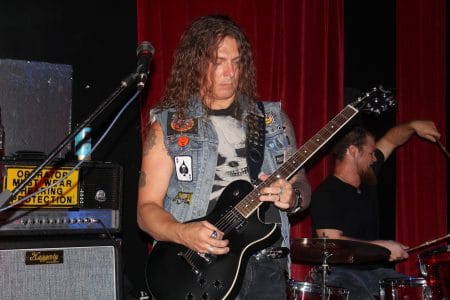 Stacey Sleaze informed everyone that the band’s drummer on this night (a bearded young man) learned all the material in a very short time span enabling the group to be able to embark on its tour as planned. With that being said, drummer Alex (I subsequently learned his name after the band’s set) energetically played the drum intro to “You Could Be Mine.” It seemed to me that this was the turning point of the evening for Sleazy Way Out as the band members, and particularly Stacey Sleaze, seemed to be more comfortable playing to the audience. Stacey Sleaze started addressing the audience members more frequently and got everyone to sing along to the last song of the night — “I Want It.”

Guitarist Cleve also made his way onto the general admission floor during one of the last songs for his guitar solo. I was also able to get one of his guitar picks which he flicked just past me. I don’t think anyone else really saw that so after taking a few more photos, I turned back and was able to retrieve the guitar pick from the ground. Bassist Xavier put on a solid performance as well headbanging away throughout the set. Drummer Alex was 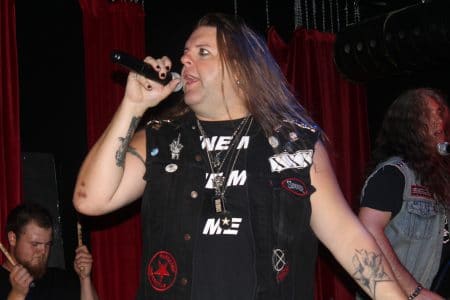 impressive behind the drum kit pounding away relentlessly. It’s hard to believe that the drummer had only learned the band’s set only a few days (or perhaps weeks) beforehand. Singer Stacey Sleaze had good presence on stage and reminded me quite a bit of former Skid Row singer Sebastian Bach with his height and poses while singing and screaming.

Overall, Sleazy Way Out put on a very good performance taking into account the difficult circumstances. My favorites songs of the night were the last two — “Born To Blooze” and “I Want It” — which felt a cut above the other songs played on the night due to their sing along portions. After the show, I introduced myself to Stacey Sleaze and we had a fun chat including his recent visit to LA. As with many French Canadians, Stacey Sleaze was extremely friendly and I could feel his passion for everything rock n’ roll music while conversing with him. I also got to meet guitarist Cleve who has one of the strongest handshakes that I have encountered in some time. After shaking his hand a couple of times, I was a little bit concerned about how my right hand would feel playing tennis (having had a prior right wrist injury in the past) but everything turned out fine. It was just momentary pain while getting Cleve‘s crushing handshake. I am kidding of 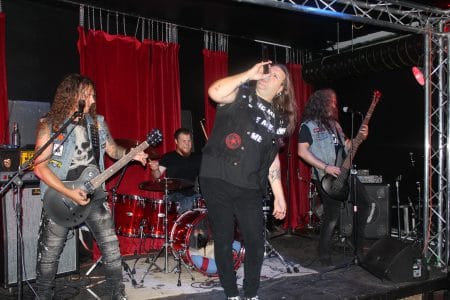 course (kind of). Both Stacey Sleaze and Cleve were very friendly and you can expect to see a lot more of Sleazy Way Out on Sleaze Roxx in the future.