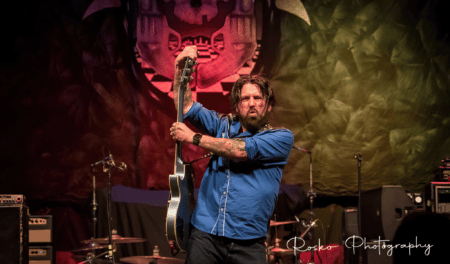 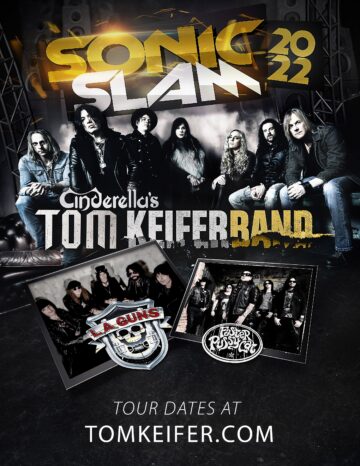 The Sonic Slam tour with Tom Keifer, L.A. Guns and Faster Pussycat headed out on the road together for their U.S. summer tour on June 1, 2022. What a spectacular line-up of hard rock veterans! Each band brings so many hits to the table that they can quickly fill a night with great music without barely putting a dent in their discographies. The show in Greensburg, Pennsylvania was originally scheduled for Wednesday, June 15th but was rescheduled, at the last minute, for Monday, June 20th.

The show was postponed by a few days due to sickness in the Keifer camp, however, it was well worth the wait. This show took place in a great theater in Greensburg, Pennsylvania which first opened back in 1926. It holds about 1,300 concert goers and was filled this night with fans anxiously looking forward to hard rocking night.

Faster Pussycat were first up, and they were loud, dirty, and in your face, squeezing as many of their hits into the set as possible. Still, their set was too short in this girl’s opinion. The guys from the L.A. Guns and Keifer camps could not have asked for a better opener. They shook this crowd right out of their Monday funk and suddenly, it felt like a Friday night party with Danny Nordahl in the lead! If you know Danny, you know he can party but luckily for all of us he stayed on his feet throughout the entire performance. Sam “Bam” 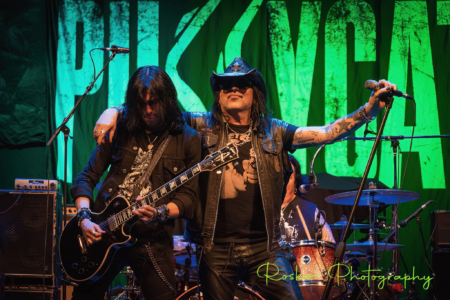 Koltun and Ronnie Simmons rocked songs like “Babylon” and “Jack The Bastard.” Drummer, Chad Stewart, had a permanent smile on his face throughout the entire set. Taime Downe was spot on with his performance and was ever so gracious, truly thanking everyone for their attendance.

Next up, L.A. Guns came out guns blazing with their ring master, Phil Lewis, leading the charge. This band proceeded to 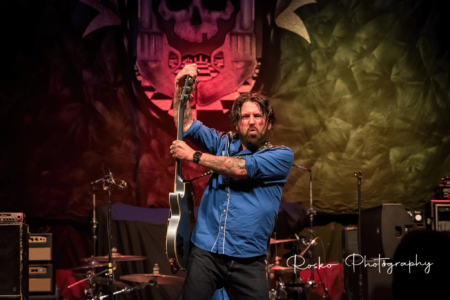 entertain the audience with a set list of their greatest hits such as “Never Enough”, “Electric Gypsy”, “Sex Action”, and who could forget “The Ballad of Jayne”. Their new drummer, Shawn Duncan, seems to be a great addition. He looked comfortable and certainly loves to hit the drums hard! So hard they had to take a break to replace a broken drum, leaving Phil to pass the time with the crowd. During this little break we learned that Tracii Guns’ favorite color is blue (which explained his choice of shirts for the evening).

Tracii Guns – the band’s founder not only showed off his love for blue, this night, he showed his guitar prowess over and over during their set. Tracii’s solo before “Over The Edge” was a night’s highlight, while Phil’s vocals were extraordinary. Ace Von Johnson is still a fairly new addition to L.A. Guns. He was previously a member of Faster Pussycat. He effortlessly showed his 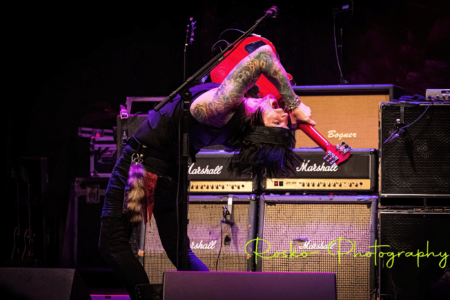 many talents such as back bends, blowing bubbles, making the girls weak in the knees, all while killing it on the rhythm guitar.

Last, but not definitely the least, the headliner of the evening was Tom Keifer. Most rockers were first introduced to Tom Keifer 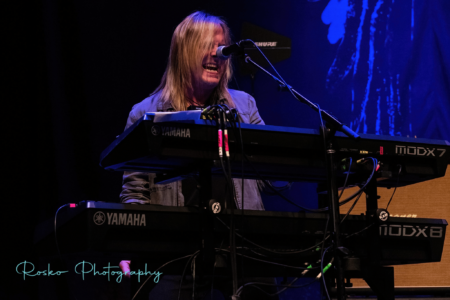 as Cinderella’s frontman and songwriter. Tom Keifer now continues his career touring and recording with the Tom Keifer Band, who joined him tonight to close out the show. Every time I see Tom perform, I feel as though I need to have 911 on speed dial. He gives every ounce of himself to the crowd each and every night he’s on stage. While the band normally has a bluesy rock vibe, tonight’s show had a different feel and it fit perfectly with the Sonic Slam line-up, as they were here to rock. Tony Higbee, the lead guitarist of the Tom Keifer Band has so much enthusiasm and energy onstage, he simply cannot be contained. However, the band’s background vocalists, Savannah Keifer and Kendra Chantelle, were noticeably absent. Tom mentioned during the show that they were still recovering from illness and the entire audience 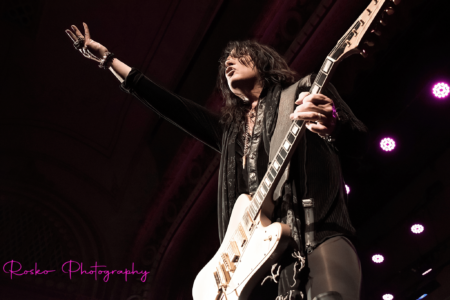 screamed their well wishes for a speedy recovery. One of the highlights of the night was when Tom performed “Don’t Know What You Got (Till it’s Gone)” in front of his piano with an empty chair where his wife Savannah normally joins him. The setlist for the evening was a good mix of new songs from the Tom Keifer Band and the many hits of Cinderella, from “Solid Ground” and “It’s Not Enough” to those Cinderella songs that made us all fall in love with Tom Keifer’s voice years ago such as “Night Songs”, “Shake Me” and “Fallin’ Apart At The Seams”. 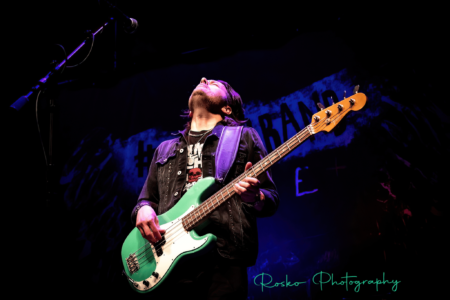 All three bands were truly happy to be there sharing their music and this could be felt throughout the night. There is still an opportunity to catch this amazing line-up. Do yourself a favor and do your best to catch one of the Sonic Slam 2022 tour dates that remain. It’s up to you to keep live music thriving!