SONS OF APOLLO PUT ON AWESOME DISPLAY OF MUSICIANSHIP 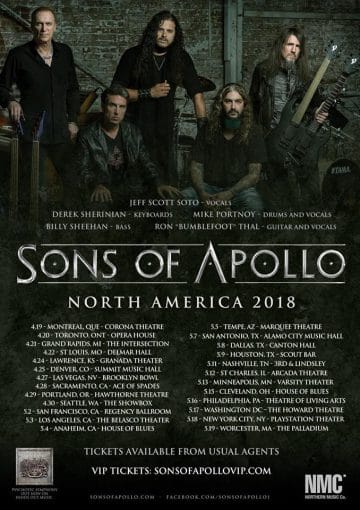 Here on this Sunday night at this great venue called The Forge in Joliet, Illinois just outside of Chicago, Sons Of Apollo consisting of Mike Portnoy and Derek Sherinian (both ex-Dream Theater) along with guitarist Ron “Bumblefoot” Thal (ex-Guns N’ Roses), bassist Billy Sheehan (The Winery Dogs, Mr. Big, David Lee Roth) and vocalist Jeff Scott Soto (ex-Journey, ex-Yngwie Malmsteen’s Rising Force) were set to play. The stage was set for this supergroup and the crowd was in rare form anticipating the charge of this powerhouse band loaded full of musical talent.

The first song of the night “God Of The Sun” featured appealing melodies and a progressive prog rock sound with a middle eastern sound. Bumblefoot’s double neck guitar shredding was on fire while Soto’s vocals came across so perfectly well with this bigger than life song. The night was a mixture of the band’s originals as well as covers from Dream Theater, Van Halen and Queen with the Pink Panther theme song to top all cover songs. Billy Sheehan, the most influential bassist of all time, was showing off his double neck bass guitar with lightning speed finger picking as usual. Billy just plays like a little kid having fun on stage all the time. The man is addicted to playing music non stop. Billy’s love for playing and creating music is amazing at 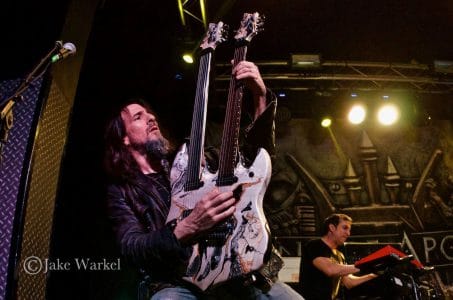 his age. He’s a man on a never ending mission. Derek Sherinian has for so many years kicked ass on keyboards and tonight was no exception. He has distinguished himself by his aggressive “guitaristic” keyboard style, which was phenomenal on this night. Derek’s keyboard playing makes this band better. All of the band members compliment each other musically very well, which is why they work and sound so well together.

The most amusing and entertaining part of the evening was when the fans were treated to the Pink Panther theme song, which was done so well. Most fans that night probably never thought they would be hearing that at a rock show. I was glad to see Mike Portnoy having fun all night behind the drums. If there’s one thing he needs practice at is catching his drumsticks. For whatever reason, he was having trouble almost every time he went to throw his drumsticks up to catch them. Mike was way off on his catching skills but right on in terms of the drums as usual. Mike Portnoy is hands down one of the greatest drummers of all time and always makes drumming look so easy. 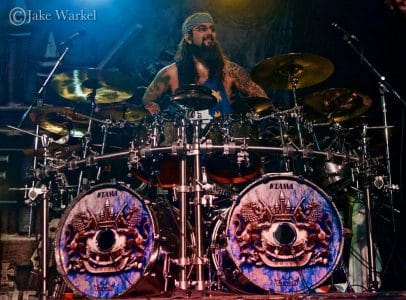 When the band came back for the encore, Soto ended up at the back of the bar doing shots with fans while the band took the stage playing Van Halen’s “And The Cradle Will Rock.” When it was time to sing, Jeff Scott Soto knocked it out of the park walking threw the crowd singing as he was making it back to the stage sounding better than David Lee Roth ever had — which for Jeff, I assume, is like taking a break on his voice. Soto’s vocals all night were powerful and melodic. The range he has and the command of his voice is still outstanding. Musically, I’ve heard hundreds of bands jam out this Van Halen tune and by far Ron “Bumblefoot” Thal on guitar is the only one in my opinion that actually sounds like Eddie Van Halen. If you closed your eyes, you would have actually thought Eddie Van Halen was playing on guitar. Many try but can’t succeed and not even a lot of the Van Halen cover bands. I love Ron Thal’s guitar playing. He’s so technically skilled with techniques far beyond most players out there today. I still believe ’til this day that Bumblefoot is an extremely underrated guitarist. I hate saying that but it’s true. He’s a great songwriter and vocalist also. If you haven’t looked into Ron Thal’s other bands or solo projects through his career, I would strongly suggest to do so as it won’t disappoint. 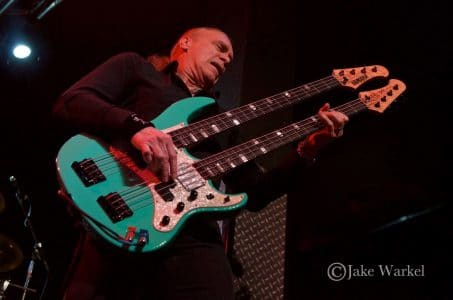 The band sounded great. They killed it and with all that talent, you would expect that but at the end of the day, you only sound that good together when you gel and have great charisma. Not all great players can get together and make it work but as for these five gentlemen, it works and I hope they do continue on down the road and create even better material. The good news is Mike Portnoy announced Sons Of Apollo will be back in the Chicago area at the Arcada Theatre on May 12, 2018. So for those that couldn’t make it out on this Sunday night, they are back in town on a Saturday night so no excuses folks!

I strongly recommend getting off your ass and going to a Sons Of Apollo show when they are at a city in or around you as well as picking up their debut album Psychotic Symphony, which was released by InsideOut Music on October 20, 2017. It sold around 5,200 copies in the United States in its first week of release. It has earned the band the top position on Billboard‘s Heatseekers chart, which focuses on top-selling albums by new or developing acts, which is defined as those who have never appeared on the top 100 of the Billboard 200.

Sons Of Apollo’s setlist:
01. God Of The Sun 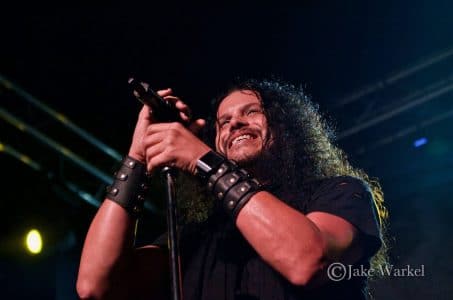 Sons Of Apollo performing Bass Solo (by Billy Sheehan) and “Lost In Oblivion” live at The Forge in Joliet, Illinois, USA on February 18, 2018: