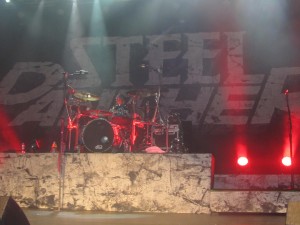 The one important indicia of an excellent performance from an entertainer is when the audience has completely lost themselves in your performance. That is what I found happened to me during Steel Panther‘s entire — and now seemingly annual — spring visit to the Sound Academy in Toronto. From the time that Steel Panther hit the stage sharply at their announced start time of 10:15 pm to the time that their set ended almost two hours later, I had been completely enthralled by their performance laughing at all the jokes, rocking to the great music and taking in all of the visual stimulation being offered throughout the night that I literally forgot about anything else happening in the world. This has happened so rarely that I have to give full credit to guitarist Satchel, lead vocalist Michael Starr, bassist Lexxi Foxx and drummer Stix Zadinia for putting on such an exciting performance that I would literally forget about everything else that might be going on for almost two hours.

After having caught Last Bullet play a free outdoor show at the infamous Yonge-Dundas Square, my friend Eduardo and I quickly made our way to my car for the short drive to the Sound Academy. The venue was already quite packed by the time we got there while opening act Future Villains were tearing through a very good cover of Deep Purple‘s “Highway Star”. Interestingly enough, Future Villains were the opening act for Steel Panther at the Sound Academy last year at just about the same time. We were able to hear a couple more tracks from Future Villains and what mostly caught my attention was how good of a singer that lead vocalist Dusty Bones was. The guy has got a great voice and can seemingly sing just about anything. 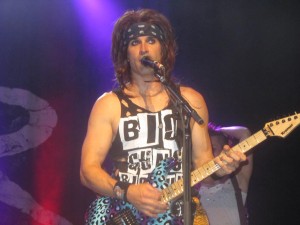 During Future Villains‘ set, Eduardo and I were able to meet up with a bunch of friends including fellow Sleaze Roxx writer Mark Hovarth and his buddy Allan (both of whom did the meet and greet with Steel Panther), Mark from Kitchener/Waterloo who is also known as the “walking encyclopaedia of music” and his buddy Jeremy. Unfortunately, they were located about twenty rows from the front of the stage so I started making my way slowly closer to the stage. By the time that Steel Panther hit the stage, I was about four “tight” rows from the front. However, based on prior Steel Panther concerts that I had attended, I knew that the crowd would be shifting, especially when one or more mosh pits would invariably take place. My assumption was correct given that by the time that Steel Panther embarked into their second or third song, I was one row back from the front. To my great surprise, by the time that Steel Panther played their fifth song of the night, I was able to get to the front right behind the big stage barrier with only the pit for the photographers / security in front of my view of the stage. Perhaps it was because the crowd was really pushing to the front and therefore putting a lot of pressure sometimes on people in the front rows but I was quite surprised that whomever was occupying the spot to my right seemed to be constantly changing every couple of songs for the entire show. 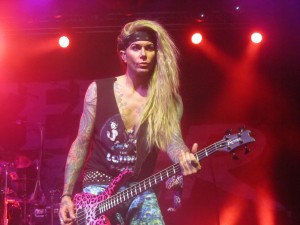 Just prior to Steel Panther hitting the stage, you could just tell that the crowd was in a singing mood as just about everyone was singing aloud to Van Halen‘s “Runnin’ With The Devil” playing from the PA system. Steel Panther started their set with “Pussywhipped” and “Party Like Tomorrow Is The End Of The World” from their very good latest record All You Can Eat. As is customary after the band’s second song of the night, Satchel and Starr along with Foxx then delivered their usual comedy routine filled with silly and infantile sexually charged jokes that had most of the audience cheering and laughing out loud. Although some of the jokes seemed like repeats from prior years, they still got a great reaction from the audience who didn’t really seem to care.

Party Like Tomorrow Is The End Of The World Steel Panther

STEEL PANTHER perform Party Like Tomorrow Is The End Of The World. TORONTO @ The Sound Academy May 22/2015 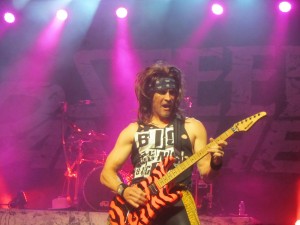 What was certainly a welcome change this time around was that Steel Panther mixed up their setlist quite a bit from the last time they played in Toronto last year. New additions “Fat Girl (Thar She Blows)”, “The Shocker” and “Ten Strikes You’re Out” sounded great alongside the perennial Steel Panther classics such as “Tomorrow Night”, “17 Girls In A Row” and “Asian Hooker”. Unlike any other band that I know that can pretty much play ANY song they want from one of their three records and their audience will not only enjoy it but will also know all the words to whatever song is being played!

What keeps surprising me time after time when I go to a Steel Panther concert is that the audience is like no other that you will encounter at a heavy metal concert. Let’s face it, for some of the 80s era metal acts that you might catch playing live these days, the largest part of the audience consists of people in their 50s who grew up listening to the 80s bands back in the day. Even newer metal acts sometimes seem to have a large aging audience. However, 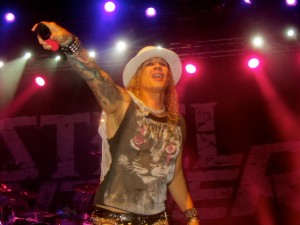 this is clearly not the case with Steel Panther who seem to attract a young and vivacious crowd. You would think that Steel Panther‘s sexually charged and frankly inappropriate jokes towards women would keep the female gender away from their live shows but the opposite seems to routinely be the case. Every year, the audience is filled with young and good looking women more than ready to be vilified and put down (in a funny sort of way) and even coaxed into showing their breasts (or titties) not only to the band but the entire audience! You can have older rockers dressed in over the top 80s wear with huge wigs to clean cut high school kids in the crowd and the one common factor is that all of these people know and are singing along to all the words of all the songs being played by Steel Panther. Whatever the case, it makes for an incredible atmosphere and one great evening of Panther style comedy filled heavy metal. 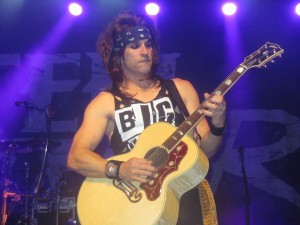 I’ve said it once and I’ll say it again, if Steel Panther did not have great songs, all of their shtick that accompanies their live shows wouldn’t work. Luckily, Steel Panther have really good songs even if you took out the silly lyrics. Everything that Steel Panther are known for seemed to occur on this night such as the throngs of women from the audience getting up and dancing on stage during “17 Girls In A Row”. One of the highlights for me was the acoustic medley of songs that Steel Panther played with drummer Zadinia taking centre stage playing keyboards and which started with the band’s ode to everything that some people will say is wrong with music these days: “Kanye”. Steel Panther then completed their acoustic medley with “Weenie Ride”, “Stripper Girl”, “Why Don’t You Trust Me” and “Girl From Oklahoma” which sparked loud sing alongs from the audience. The band closed off an amazing evening with a bang by playing “Eyes Of A Panther” and “Death To All But Metal”. 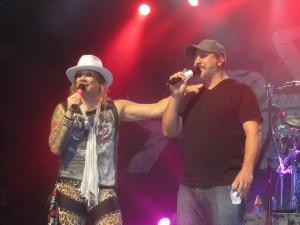 Another surprise was during the first encore when Starr introduced Joey Fatone. I recognized Fatone as the singer from one of those boy bands that were popular in the 90s. I thought that he might have been a part of the Backstreet Boys but as it would turn out, he became famous due to his time in NSYNC. I can’t say that I am that familiar with any of those boy bands but will certainly concede that bands such as NSYNC have come up with a few catchy songs along the way. As it turns out, Fatone is a big Steel Panther fan and he helped the band sing its last two songs of the night: “Community Property” and “Party All Day (F*ck All Night)”. After all was said and done, and as we were heading out, I was asked where Steel Panther‘s show ranked this year for me in terms of live performances. Last year at this juncture, I had thought that Steel Panther had put on the best performance of the year. This year, they receive top honours once again although I will rank their exceptional performance as a tie with Last Bullet‘s stellar performance in Oshawa on Valentine’s Day. One thing is for sure, I can’t wait to see Steel Panther play live once again in the future!