There always seem to be a universal buzz in the air when the ’80s heavyweight bands come to town. Groups like Motley Crue, Van Halen, Def Leppard, AC/DC, etc. always seem to draw large crowds of people that might not be as totally engulfed in that type of music as others such as myself! There is only one “newer” band — Steel Panther — that I can think of that generates this same type of buzz and excitement in the air, albeit on a smaller scale, where it seems that droves of people come out to see them that might not necessarily be into a lot of the other ’80s sounding newer bands. That has always been the key to success in the music business where a band’s music or appeal goes past its core fan base. In this day and age with ’80s style heavy metal sadly on the back burner in terms of popularity and demand — certainly compared to the mid ’80s to early ’90s — the success that Steel Panther have been able to achieve seems simply jaw dropping. However, if you have heard one of Steel Panther‘s three studio albums or especially been to one of their concerts, the band’s success is actually in this day and age not surprising. Steel Panther‘s music is super catchy, the songs’ lyrics are over the top yet really funny, and their stage performance is the perfect mix of comedy entertainment meets rocking music.

With that in mind and with no tour stop in the greater Toronto area announced for Steel Panther‘s first proper cross-country Canadian tour, I elected to go see the band play two hours away from Toronto in London, Ontario. I was unfortunately not able to recruit anyone to go with me so wasn’t excited about making the two hour trek each way by myself on a Sunday evening with an early start at work on Monday morning. Nevertheless, as Sunday evening came around, the excitement started to build. Given that I tried spending as much time with la familia as possible, I ended up scouting the show in advance and found out that the doors would open at 7:00 pm and that there would be at least one opening band that I was not familiar with. Accordingly, I elected to leave Toronto at 6:30 pm and barring any traffic issues would be at the London Music Hall by 8:30 pm.

By the time that I arrived in London at exactly the time that I had predicted, my excitement to see Steel Panther was hard to contain. I had never been to the London Music Hall before but having scouted the venue online beforehand, I knew that it had a capacity of 1,930 people. While that might not seem like that big of a venue, when you consider that London, Ontario only has a population of about 366,000 people (according to a 2011 census), is the biggest city in a two hour radius and I have seen many big name hair metal acts from the ’80s draw much smaller crowds in the Toronto area (which boasts a population of over 2.6 million according to that same 2011 census), selling out a venue such as the London Music Hall is an impressive feat. Throw in that it was Steel Panther‘s first visit to London, Ontario and that is even more impressive. It seemed when I arrived that I got in through the back of the venue since I entered through a parking lot. That turned out to be a good omen because going through that back entrance meant that I was shuffled near the front to the right side of the stage with “only” about fifteen rows of sandwiched people ahead of me. 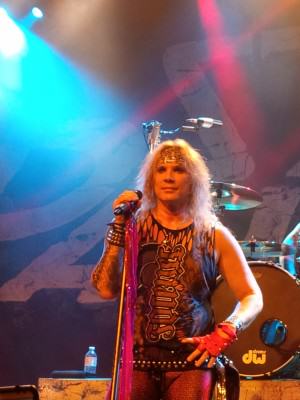 The opening act called A Rebel Few was playing its last song as I started making my way slowly through the crowd in the packed venue, which seemed a lot smaller than the 1,930 seat capacity advertised on the web. By the time that Steel Panther  were about to start, I had made my way towards the centre of the stage about five tight rows of people back from the stage, which was a lot smaller in size than the Sound Academy in Toronto where I have mostly seen Steel Panther play in the past. Everyone seemed very friendly and excited for Steel Panther to hit the stage, which has been the custom whenever I have seen the band play in the past. The crowd was a mix of older people (well, I am not that old but I did grow up back in the ’80s) like myself and a lot of younger people which is always a great sign for a band’s longevity into the future. Alas, in my haste to bid farewell to my wife and kids, and get out the door in a timely manner, I must have forgotten to place my camera’s recharged battery into my camera so I was not pleased to see that my camera was not working at all and I would have to rely on my older blackberry’s camera for photos on this night.

Within a few minutes of realizing my camera was a no go for the evening, Steel Panther hit the stage with the stellar twosome of “Eyes Of A Panther” and “Tomorrow Night” which had seemingly the entire crowd singing along. I think Steel Panther played one more song — the witty “Fat Girl (Thar She Blows)” — before the comedy duo of guitarist Satchel and lead singer Michael Starr delivered their customary crowd banter / comedy schtick, which was very well received by the audience. Even prior to Satchel and Starr addressing the crowd, all of the band members were in full character mode with Satchel and “dumb” bassist Lexxi Foxx trading looks as Foxx apparently could not keep up with the simple choreographed moves between the two during the opening 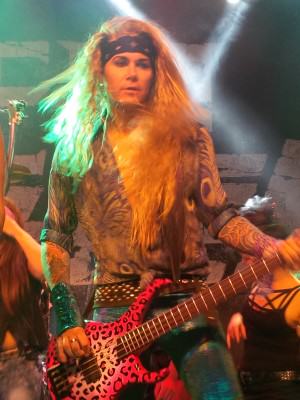 There were some newer jokes which seemed to have been made up on the spot such as when Satchel started praising a person in a wheelchair for being in the front row on the right side of the stage. The great songs kept pouring in with “Just Like Tiger Woods” and “Turn Out The Lights” — both of which had not made the cut the last time I had seen Steel Panther play live in May of this year. Although the rest of the songs played by Steel Panther had all been played in their prior Toronto show back in May, the band had changed the order of the songs in its setlist to the point that it felt like a “fresh” new setlist. Bands should really learn from this veteran move as if you know how to play twenty songs, whether the order changes on when you play those ones should make no difference to the band members but it will make a difference to the people hearing the same songs in that set.

Steel Panther – Eyes of a PantherNOVEMBER, 15, 2015Live @ London Music Hall 2015London , Ontario, CanadaThank You For Watching Please Subscribe and Like 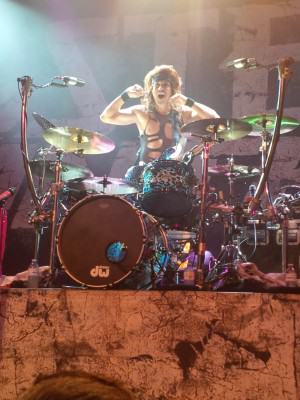 After Foxx‘s short bass solo or should I say “hair” solo since Satchel and Starr had these massive oversize hair blowers to either side of Foxx‘s face during his entire solo, Steel Panther eventually played their inappropriate but very funny song “Asian Hooker.” For the next four or five songs, it seemed that there were many women / girls onstage dancing away which is always a trademark of a Steel Panther show. One married female fan by the name of Jeannie I believe was a very good sport during the song “Girl From Oklahoma” singing the track’s funny lyrics to the delight of Starr and company. I was actually very impressed with drummer Stix Zadinia who played most of the song “17 Girls In A Row” with a good looking female fan on his back or seated directly behind him without missing a beat. Apparently just another day at the office for the Steel Panther drummer! In between the female dancing fans appearing onstage, Satchel also put on an entertaining guitar solo playing snippets of well known popular heavy metal songs to the crowd’s satisfaction.

Steel Panther closed off their set with rousing renditions of “Gloryhole” and “Death To All But Metal” with the former song reminding me of the atrocities that occurred in Paris, France (due to the reference to that city in the song’s lyrics) including at the Eagles of Death Metal concert just two days earlier. Nothing was said by Steel Panther in that regard but I would not expect them to considering that Steel Panther are all about fun and entertainment rather than touching on any serious topic. Starr did go out of character a little bit by stating to the crowd towards the end that the band had just been advised that the show was sold out and thanking the crowd at the end for making all of the band members’ dreams come true. At any Steel Panther headlining show that I have seen, most if not all of the audience members always seem to know the lyrics to 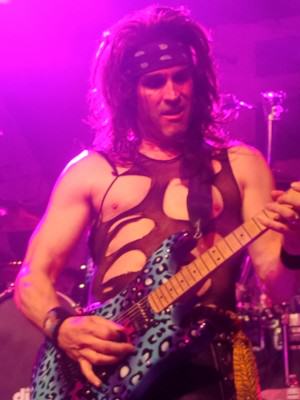 the band’s songs but it must have been really heartwarming to the Steel Panther guys when here they were playing a sold out show in a market that they had never been to before and the entire crowd was seemingly singing all of the lyrics to their second last song “Community Property” without little help from Starr. Steel Panther capped off their two song encore with a spirited version of “Party All Day (F*ck All Night).”

Having already found one Satchel guitar pick on the ground earlier in the show after I felt the pick hitting my body, I was quite pleased and surprised when Satchel spit out a last guitar pick from his mouth and it landed right at my chest with one of my arms luckily at that exact spot. Satchel has the unusual talent of being able to spit out guitar picks from his mouth with deadly accuracy to people in the audience. I’m not sure if Satchel was aiming to spit out the guitar pick to me on this night or simply trying to get some good distance for that one (I was about two rows from the front by that time). Whatever the case, I was very pleased to be able to get two guitar picks on the night even though I had to wipe Satchel‘s saliva from the last one before quickly putting it in my pocket.

The two hour drive back home was a breeze as the excitement and high of the Steel Panther show easily carried me through on the car ride back home. As usual, Steel Panther put on an amazing performance and I already can’t wait to see them play live again — hopefully in the near foreseeable future!