COLD OUT AND SOLD OUT IN CHICAGO 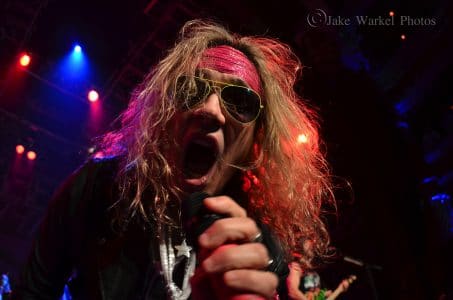 Steel Panther — the ’80s glam rock band of today has fans — or what Steel Panther fans are called Fanthers — were out in full force as it was another sold out show for the boys. The Fanthers were lined up outside wrapping around the House of Blues hours before the show dealing with the cold winter mix of rain, snow and sleet. These wig wearing, spandex wearing, Fanthers, who were playing the roles of rock stars themselves, were not phased by the weather.

It was a great welcome home for the Chicago born lead singer Ralph Saenz also known as Michael Starr who was raised primarily in Van Nuys, California and currently resides in Los Angeles, California. Starr showed much love to the Chicago Bears by wearing a winter hat of the football team during 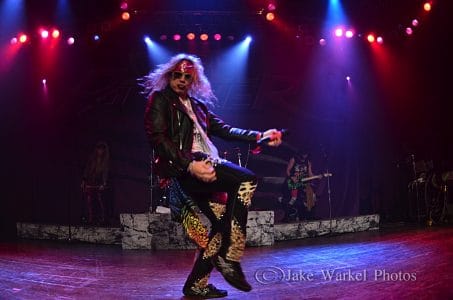 soundcheck earlier in the evening. Steel Panther are as crazy during soundcheck as they are when they are performing for the Fanthers but yet strangely serious. Now I know how they debuted Billboards #1 Top Current Comedy chart and #24 Top 200 Album chart for their third album All You Can Eat, which was released back in 2014.

Fun, exciting, in your face and with a larger than life stage presence, Steel Panther hit the stage like the party band they are and caused no disappointments. Satchel (guitar), Lexxi Foxx (bass) and Stix Zadinia (drums) never sounded so good. Musically as a whole, they were tight. Vocally, Starr still has his pipes and sounded remarkable. Maybe one day, he can give vocal lessons to David Lee Roth. Steel Panther overall 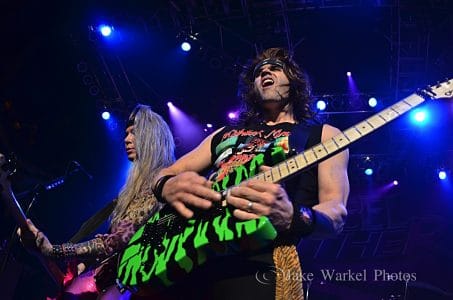 are a very musically talented group of guys. What’s more impressive is with all the shenanigans, you can’t ask for a better live show. These musically talented guys create such great music and take great pride in that regard. After seeing Satchel bring up a lovely lady from the crowd at the start of the second song (“Just Like Tiger Woods”), and seeing Starr spinning her around and twirling her like a top, I’m thinking that Starr might want to consider joining Dancing With The Stars.

As always, the ultimate party band Steel Panther did not disappoint by bringing the party to the stage, especially when it was filled with beautiful women for the song “17 Girls In A Row.” The stage continued to be filled with the women during “Gloryhole” and three quarters of the last song “Death To All But Metal.” Steel Panther ended the party for the Fanthers of 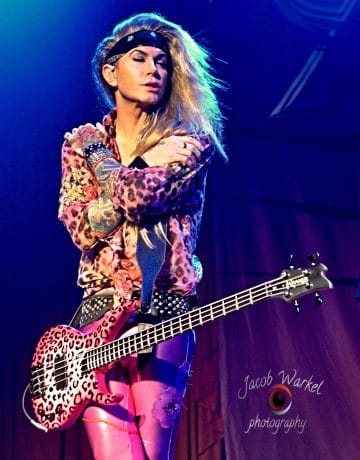 Chicago with their two encores, “Community Property” and “Party All Day (Fuck All Night).”