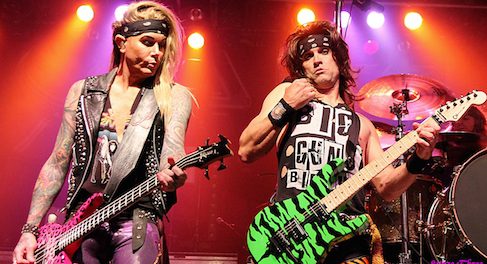 STEEL PANTHER ARE A “MUST SEE LIVE” 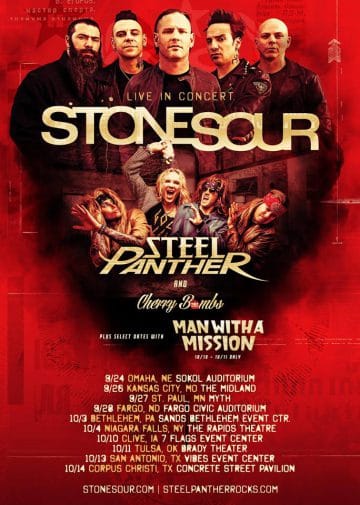 Stone Sour, Steel Panther, and Cherry Bombs invaded The Myth Nightclub in Maplewood, Minnesota to a packed house on a Wednesday night. The Myth Nightclub has been the place to go as of late in the Minneapolis and St. Paul, Minnesota area as most of the concert venues/night clubs are closing down all over the Metro. I have always had a love/hate relationship with The Myth. It is a great venue to see a show, as long as they don’t over crowd the place. I have been to a lot of shows there where they have over sold the tickets and it is almost impossible to move around, let alone to make it to the bathroom. Upon my arrival to The Myth, I thought to myself that they did it again — over sold the tickets and the place was going to be packed (because of the lines I saw when I was walking up to the club).

While I was in line, I started to chat with the people around me and they informed me that The Myth is under new management and that they don’t over sell the tickets like the previous owners. They were right!!! Before the show started, I was able to find a spot with a great view and I was also able to move around the club without bumping into people the whole time. After the show, I also noticed a lot of social media posts with people posting how happy they were that The Myth didn’t over sell the tickets and they could actually enjoy a show there now. Kudos to the new management at The Myth Nightclub.

Now that the crowd was turned on, it was time for Steel Panther to finish the job! This would be my first time seeing Steel Panther live (or as they might call it, I was a virgin), and I was excited for my first time as I have heard a lot of great things 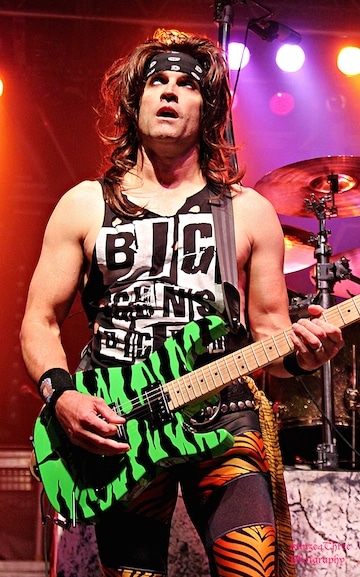 about their show. “Eyes Of A Panther” got the party started and then went right into “Goin’ In the Backdoor.” Once that song was over, all the shenanigans started. Guitarist, Satchel, went on to thank Stone Sour for bringing them out on tour and that he was truly grateful for the $200 a month they are paid for this tour. The jokes didn’t stop there either, as they kept up with the fooling around all night. It is actually good to watch a band have fun up on stage and truly enjoy what they are doing. Yes, I know their lyrics are cheesy and perverted, but the music is fantastic and Steel Panther are a very talented band. The band’s lead vocalist, Michael Starr, has an amazing voice and I even had to ask someone I knew that was up front if he was lip synching because his voice sounded so good live. He ensured me that he was singing and was not pulling a Britney Spears on the crowd. Bassist, Lexxi Foxx, did spend a lot of time looking at himself from a hand held mirror and making sure his hair was in all the right places. He even asked the crowd and band if they liked his new lips that he just had done a few days ago! Between songs, he kept himself busy applying hair spray to his hair and lip stick to his lips. Drummer, Stix Zadinia, didn’t have too much interaction with the band or crowd, but he was the butt end of a few jokes throughout the night.

Before their performance of “Girl From Oklahoma”, Steel Panther brought up a very attractive female from the crowd, so Starr could serenade her. Starr did get distracted by her looks and messed up, so they had to start the song over. The band made sure to make fun of Starr prior to starting the song over. The second time around was flawless and the crowd was singing word for word. When the song was completed, they started to bring up about ten more females to the stage to they could have some dancers for “17 Girls In A Row” and “Gloryhole.” 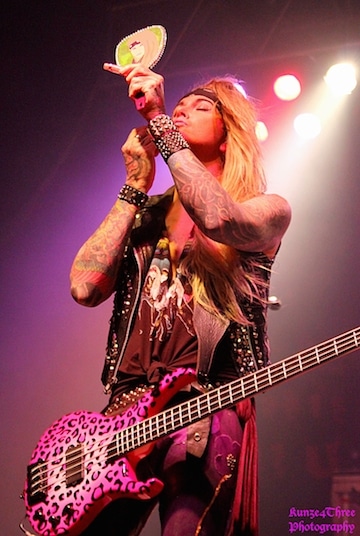 A few of the females were out of control as I could tell they were intoxicated, but it wouldn’t be a rock show without a few drunk girls in the crowd. Towards the end of “Gloryhole,” the security team started to escort the girls off the stage so the band could finish their set with the popular tracks “Community Property” and set closer “Death To All but Metal.”

Steel Panther performing “Death To All But Metal” at The Myth Nightclub in Maplewood, Minnesota, USA on September 27, 2017:

The stage was set for the headliners, Stone Sour, who are out on tour to promote their new album, Hydrograd.  When the lights went out, the intro to Hydrograd, “YSIF,” was blaring through the PA system.  When the intro was coming to an end, the band started coming out on stage one by one, and once Corey Taylor got on stage he belted out to the crowd, “Welcome to the party you dirty motherfuckers.”  This ignited a fire in the already wild crowd for the night and the party didn’t stop till the last notes of “Fabuless” ended their night.

The first song of the night, was “Taipei Person/Allah Tea,” which is also the first official song off Hydrograd. The crowd was more than excited to hear the new songs from Stone Sour and they kept it going with the following track “Kneivel Has Landed.”  Taylor informed the crowd that during the first song, he tweaked his back and that he was in a lot of pain, but that wasn’t going to stop him from putting on one hell of a show for the sold out crowd. 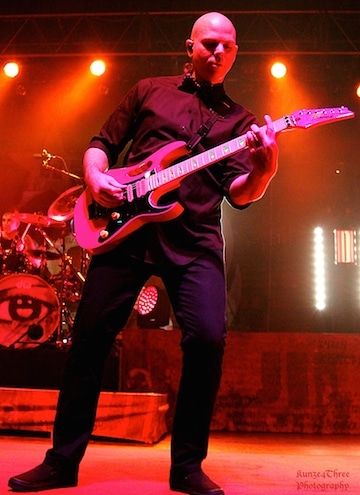 After the crowd got a taste of the new songs, it was time for Stone Sour to play songs from their previous albums. “Take a Number” was a nice surprise as I enjoy all the songs from their self-titled album. “Reborn” kept the madness going, but “Say You’ll Haunt Me” did slow things down a bit but to my surprise, it was one of the most popular songs from the night.  I do enjoy most of Stone Sour‘s discography, but Audio Secrecy is my least favorite and I don’t find myself listening to that album a lot.  “Hesitate” was the only other song from Audio Secrecy, and that went over surprisingly well.

Taylor took some time during the night to let the crowd know why he wanted to put the tour together, and it was just to have some fun.  He mentioned that if you put bands together that all sound the same, then it tends to get boring at the end of the night and he wanted something that would be entertaining the whole night. Plus, Taylor is a huge fan of Steel Panther and he wanted to do a tour together with them for a long time. I do have to agree with him, as this bill was something different than what I am used to seeing, but nowadays, people have spread their music tastes and like all types of metal.

The highlight of the night for me was when they came back for the three song encore. It was time for the double assault of the first two tracks from House of Gold & Bones Part 1.  The beginning of “Gone Sovereign” started to play over the speakers, and the band came back on stage to blow all of our faces off.  Next was “Absolute Zero” and in my opinion, these two songs are some of the best tracks Stone Sour have ever done.  The fact that they are back to back, just complement each other and make them the best two songs to start off an album.

“Fabuless” was the closing song for the night and they even had the inflatable dancing man props that were used in the music video, up on the stage with them. These were the only props they used all night, besides all the plastic water bottles that Taylor used during the night and threw out in the crowd.

Stone Sour were firing on all cylinders that night and I left that night thoroughly enjoying the show from beginning to end.  Drummer, Roy Mayorga, was fun to watch behind the kit. He makes playing the drums, look like a lot of fun and wants me to take up drumming now. Guitarist and newest addition to the band, Christian Martucci, is a great fit to the band and did a fantastic job on the solos and filling in those large shoes from previous guitarist, Jim Root. Bassist, Johny Chow, is another great addition to this band and is in synch with Mayorga to make sure the rhythm section is perfect. To keep the rhythm as perfect as possible, rhythm guitarist Josh Rand, completes the current line-up of Stone Sour.

I know this review is a little past due, so I hope when this tour did hit your town, you were able to make it. I am hoping that other bands will follow suit and stir up some tour packages, so not all the bands sound the same. I really did enjoy hearing different types of metal that night and really glad I was able to attend the show. 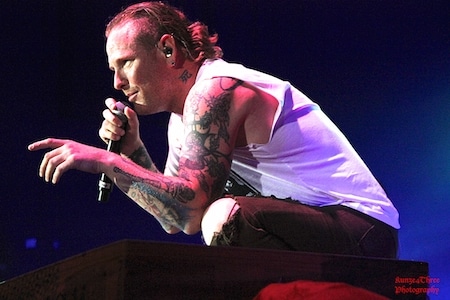