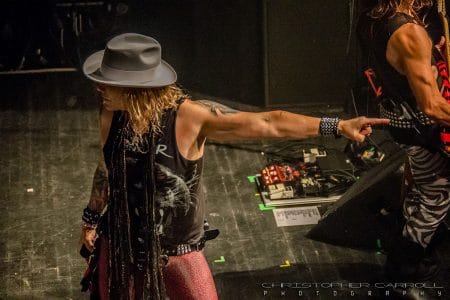 What can you say about Steel Panther that hasn’t already been said? While the unknowing comment that “They’re making fun of our genre of music” is often being made, these seasoned musicians cut their teeth by playing in bands like L.A. Guns and Rob Halford’s Fight. Once the hairband era ended, they continued to make their living as musicians in paying bands but chose to continue to play the music they truly loved, on the side… just for fun. Nobody was paying to see this style of music anymore but they had a ball doing it, even if it was for a crowd of five. Given the caliber of musicianship in the band, members of big named bands started showing up to watch and were always invited to jump onstage to sit in on a song. From there, Steel Panther transformed into the phenomenon they are today. 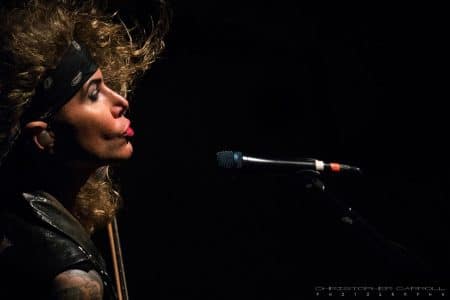 Yes, they still try to have a good time during their shows (hence the outfits, the personas, the funny lyrics, the comments of excessive lifestyles) and what’s wrong with that? They’ve been offered big money to record a ‘serious’ album but brush those offers aside without a thought. They’re playing music they love and having a blast doing it. Personally, I don’t know how anyone can attend a Steel Panther show and not leave there feeling like they’ve just had the best time of their lives.

I traveled down to the Virginia Beach area for the opening show of the current Steel Panther tour (isn’t that where everyone kicks off a tour?). I’ve seen Steel Panther more times than I can count but this is the first time I had my doubts about the show. Had I seen them too many times? How could 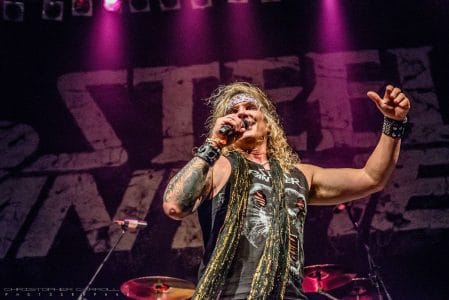 they top the previous shows? I’ve heard all these songs before… Would they still be able to entertain a season concert goer like myself? Once these guys hit the stage, it was on! They delivered ‘everything I wanted and more’! The guitar sound was present and perfect. The bass continually poked you in the chest. As pretty as Lexxi Foxx is, that man has chops! The drums were crystal clear as well and the snare sound was simply thunderous! Stix Zadinia drives the songs and slips in the fills in with ease. Michael Starr grabbed our hands and led us all through the adventure that is Steel Panther, peppered with David Lee Roth squeels that DLR wishes he could still pull off. The interludes were as entertaining as ever. 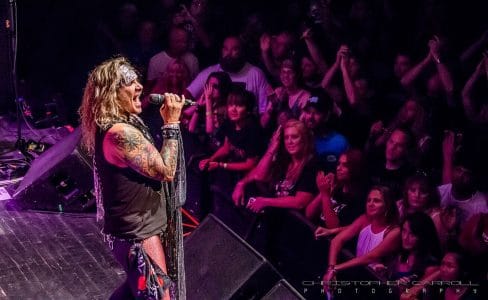 because he’d sneak ‘show your titties’ in as often as possible. One thing I loved about this show was that they went back and played some of the great songs they don’t normally play. One of the highlights was when they pulled an Asian girl from the crowd, then proceeded to invite all the Asian girls in the club to join them onstage for, you guessed it — “Asian Hooker.” He said he knew there were more in there than just the one because he noticed three horrible parking jobs out front. The crowd went crazy when one of the girls pantomimed the lyrics to the song, in time, while singing it! She spent a little time on the ground, acting out part of the song as well, before she was grabbed by a stage hand and pulled off the stage. The guys were having so much fun with her that Starr yelled, “Hey! What are you doing?” The stage hand said something that started with, “Her Dad…” We all gasped! She acted that way in front of her Asian father!? Yikes! That’s when they noticed the big black X’s on her hands. 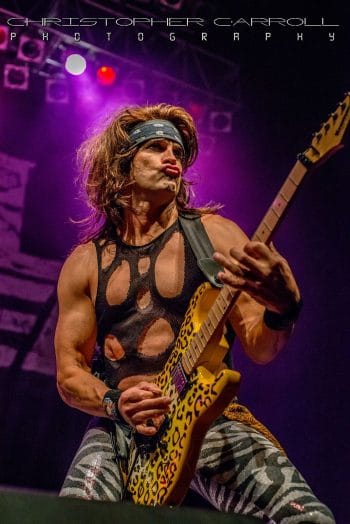 The show was interrupted once with loud annoying feedback, while Starr was trying to tell a story. The band got very upset. Starr walked away from his mic, was visibly cussing, and calling someone from offstage to take care of it. Satchel, not so nice, stated over the mic that ‘SOMEONE’s getting FIRED over this”… The stage hand came out, reached around Satchel and turned his volume knob down to stop the feedback. Satchel said, “Well, you can’t fire ME! I’m the lead guitarist.” Starr closed the show by teasing the crowd, acting like he was going to throw his hat into the crowd. He ended up tossing it from all the way in the corner of the stage back to Stix who calmly lifted his drumstick in the air, where the hat landed perfectly (to the band’s 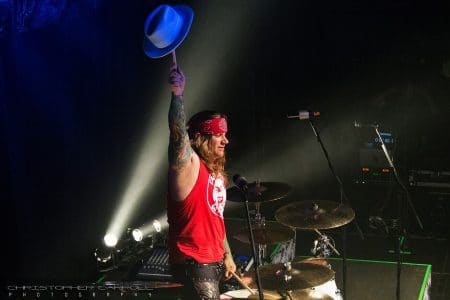 I loved these guys when their first album, Feel The Steel, came out. I didn’t believe for a second they could top it but they did with their second, Balls Out, and I was floored when they were able to top that one with their third, All You Can Eat! These guys are creative and you can tell they put time into their songwriting. They song structures aren’t as simple as they sound and with Michael Starr‘s PhD in English Literature, the lyrics, although funny, twist and turn with melodies that wrap the music incredibly well. If you’ve never seen Steel Panther, you MUST! It truly is ‘the party of the century!’

Full concert of Steel Panther‘s show at The NorVa in Norfolk, Virginia, USA on July 29, 2016: