IT DOESN’T GET MUCH BETTER THAN THAT — STEEL PANTHER AND THE WILD! 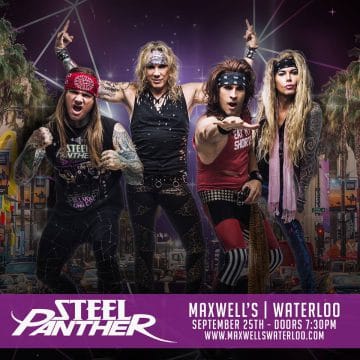 My love for Steel Panther must be well known. My friend and ace photographer Brian Ronald from Decibel Geek and I were chatting via Facebook messenger a few days ago after Steel Panther‘s concert at Maxwell’s Concerts & Events earlier this week. Apparently, Brian had chatted to some others who had attended the concert and they indicated that they had not seen me there. Even though Brian and I had not chatted about attending the Steel Panther concert in any way, Brian assured his friends that I must have been in attendance. How right Brian was. And why wouldn’t I? Quite frankly, Steel Panther are the most consistently great live band that I have ever seen. This was the tenth time that I was seeing the band in concert and once again, I was struck by all the smiles and laughter stemming from the crowd on hand to see guitarist Satchel, singer Michael Starr, drummer Stix Zadinia and bassist Lexxi Foxx do their thing. For those who “get it” and just want to have a very fun night, Steel Panther deliver time and time again.

While Waterloo’s Maxwell’s is definitely a great venue for concerts, getting there from Toronto during rush hour traffic simply sucks. It took me almost two hours to make the approximately one hour trek (during normal traffic conditions). As seems to be a tradition now when I attend a concert in Waterloo, I made a stop at friend and occasional Sleaze Roxx contributor Mark Gregory‘s place. I first met Mark at a Steel Panther concert more than four years ago and not only is his knowledge of the late ’80s / early ’90s hard rock and metal scene second to none, I feel like a kid in a candy store every time that I am at his place. It was great to see Mark again and we even found something else in common (tennis) likely through one of my previous recent concert reviews. Before long, we were off to Maxwell’s. As Mark‘s girlfriend attested to me before we left, going somewhere in Waterloo with Mark means seemingly always running into someone Mark knows. The Maxwell’s Concerts & Events venue was no exception and Mark was instrumental in getting a photo pass for me to cover the concert courtesy of Paul Maxwell himself (thank you Paul!).

The one cool thing about Steel Panther is that they usually bring an opening act on the road with them even if it’s just for a couple of dates. Although I don’t always dig the bands that they bring along, on this night, I was completely stoked to see The Wild! whose two albums to date — the GxDxWxB EP and the full-length Wild At Heart — have finished at #2 in their respective 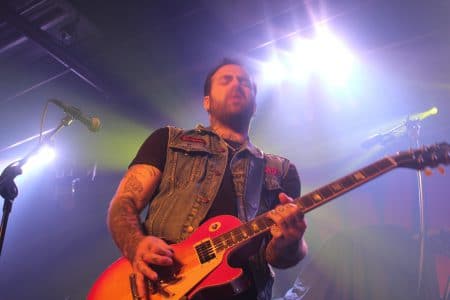 years of release (2015 and 2017). The Wild! are what I consider to be one of the best bands out there where quality — may it be their albums, their videos or their live shows — is the name of the game. Since Maxwell’s is one of those venues that actually seemingly keeps the bands to a tight schedule, I have noticed that the headlining act already has everything set up on stage to be ready to go as soon as the opening act’s gear is off the stage. What that means at Maxwell’s is that the opening act’s drum set is up front with the rest of the band since there isn’t enough room for it towards the back of the stage. While I was pleased to have a photo pass, I quickly realized that The Wild! band members were very close to where I was. So close that I could have just reached out my hand and touch the band members’ instruments but too close for my blossoming photography skills.

As usual, The Wild! came out firing on all cylinders. Tons of headbanging, quite a few choreographed moves and engaging the crowd at all times are staples of The Wild!‘s set. Of note, given my affinity for The Wild!‘s albums, I just play them from start to finish (there are no weak tracks on either album) so the titles of the songs can sometimes escape me. Although the group’s opening song “Roadhouse” sounded very familiar, I simply couldn’t remember the song title. With only nine songs to play, The Wild! simply delivered a greatest hits set playing five songs from their debut EP and four from Wild At Heart. I was quite pleased that they played “Straight To Hell” from their GxDxWxB EP, which I don’t think that I had ever heard live before. Probably the two best songs were the two newer ones — “Livin’ Free” and “Ready To Roll” — which are so engaging and easy to 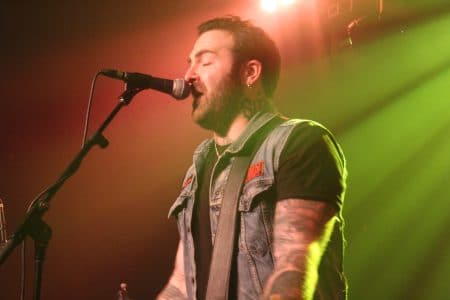 sing along to. The Wild! wrapped up their quick set with a rousing rendition of “Party ‘Til You’re Dead” and reminded me on why I consider them to be one of the best “new” bands in rock n’ roll.

I was curious to see Steel Panther this time around because they were bringing their legendary Sunset Strip Tour to the masses and outside the Los Angeles, California and Las Vegas, Nevada areas. For those who don’t know, Steel Panther paid their dues for many years playing covers of ’80s heavy metal hits as Metal Shop and later as Metal Skool before changing their name to Steel Panther. Accordingly, I thought that it would be fun to see them perform a few ’80s heavy metal staples this 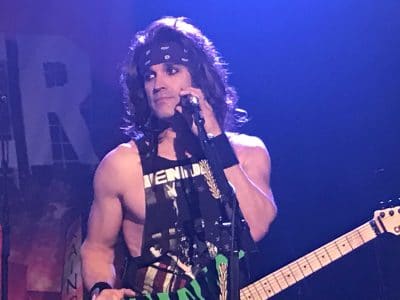 time around. Although I was looking forward to the cover songs that they would eventually play, I like Steel Panther‘s original material so much that I was hoping not to hear too many covers. As it turns out, Steel Panther struck the right balance by playing a bunch of originals at the beginning before launching in a number of cover songs and ending with a bunch of their original songs.

As previously mentioned, a Steel Panther concert is simply a lot of fun and I am always amazed at all the smiles in the audience during the entire show. In terms of Steel Panther‘s comedy routine, there seemed to be a bigger emphasis this time around on Satchel and Michael Starr promoting drug use (joking of course). There seems to be a fair amount of ad libbing on stage and Satchel usually tends to keep things current so it was funny to hear him announce that Tiger Woods was back on top before the group launched into their third song of the night — “Just Like Tiger Woods.” Of course, Satchel was referring to Woods finally winning a PGA golf event again after a five year drought. What was most impressive about the cover songs played by Steel Panther was how Starr handled them vocally. He sang in a lower register for the Scorpions classic “Rock You Like A Hurricane” so that his voice was close toe Klaus Meine on that one. He absolutely nailed Van Halen‘s “Panama” but I totally expected that given that he used to play in the Van Halen tribute band The Atomic Punks.

Steel Panther performing cover of Autograph‘s “Turn Up The Radio” live at Maxwell’s in Waterloo, Ontario, Canada on September 25, 2018:

After three rocking cover songs, Starr suddenly had to get off the stage due to some sudden microphone issues. That gave Starr time to change and steal the show with his absolutely hilarious and quite spot on characterization of the one and only Ozzy 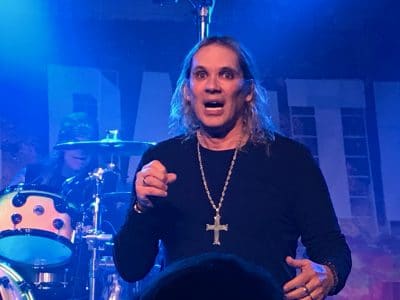 Osbourne. Starr was simply so good from looking lost on stage, staring blankly at the audience, sloppily clapping his hands together and pacing back and forth on stage like Ozzy would do. Starr put on a killer performance. Next up was Satchel’s extended guitar solo which had the guitarist playing snippets of many well known songs from Black Sabbath‘s “Iron Man” to Guns N’ Roses‘ “Sweet Child O’ Mine.” As is the custom at any Steel Panther concert, a young woman made her way to the stage to get serenaded by the band. This time, a woman by the name of “Darby” was a seemingly happy and willing participant. The best part had to be when “Darby” actually took out a retainer from her mouth as Starr and seemingly the entire audience sang the lyrics “Spit out that retainer” during the song “Girl From Oklahoma” (see 0:55 mark of video below). Once Starr saw that, he stopped the song to the great laughter from just about everyone in the audience. A cool moment which also shows Steel Panther‘s flexibility in being able to go with the flow and not put on a robotic performance night after night.

They picked me to go on stage for it 🤩

Rather than calling 17 girls on stage (to coincide with the song “17 Girls In A Row”), this time, Starr invited as many females as 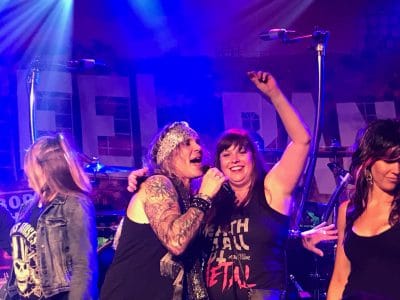 possible to come up on stage while Steel Panther performed their solid cover of Bon Jovi‘s “You Give Love A Bad Name” and their classic track “Gloryhole.” Next up was their anthem “Death To All But Metal” which unfortunately signalled that the end was near.  The two encores were predictably the sing along favorite “Community Property” and the closer “Party All Day (F*ck All Night).” I am not sure if this was part of Steel Panther‘s stage gear or Maxwell’s but I noticed a large clock towards the side of the stage counting down to presumably 11:00 pm and just like the pros that they are, Steel Panther seemingly closed the evening just within the time limits. Another great night at the hands of one of the greatest hair metal bands of all-time — Steel fucking Panther! 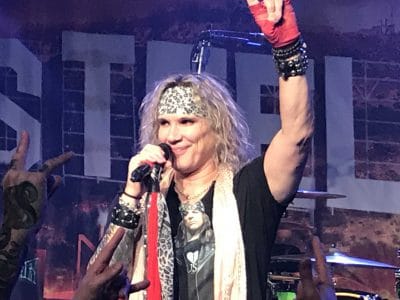