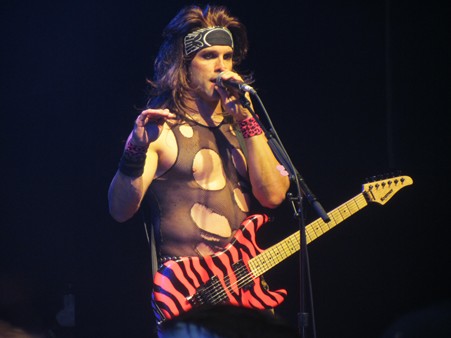 STEEL PANTHER: BRINGING METAL BACK TO THE MASSES

Combining humor with music may well be the ultimate form of entertainment, and if that is the case I just witnessed the best when it comes to the heavy metal genre. Steel Panther simply blew me away (no pun intended) during their show in Toronto in support of their latest CD ‘Balls Out’.

But before we get to what I would rank the best metal concert of 2012, the evening started off with local band Diemonds, who let the music do the talking in their rather short 30 minute set. Kicking off at about 9 pm with “Trick Or Treat”, the band really got going with next two songs, “Loud N’ Nasty” and “Get The Fuck Outta Here”. Having seen the band perform a number of times in the last five months, Diemonds appear to keep getting better every time and with more stage experience. Given the apparent limited amount of time that they had, the band kept the pace going with their two video singles “Take On The Night” and “Livin Tonight” as well as their sing-along song with the awesome bass intro, “Mystery”. When their set ended I checked the time and it was only 9:27 pm — too little material and time from a great up and coming band. It would be great to see them headline and play a full show in the Toronto area — then again, Diemonds obviously gets more exposure by opening for bigger more established bands and this is likely the best way for them to obtain a bigger fan base. 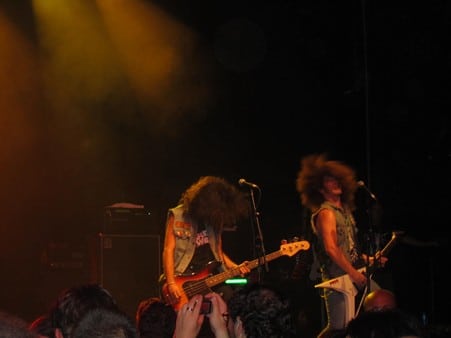 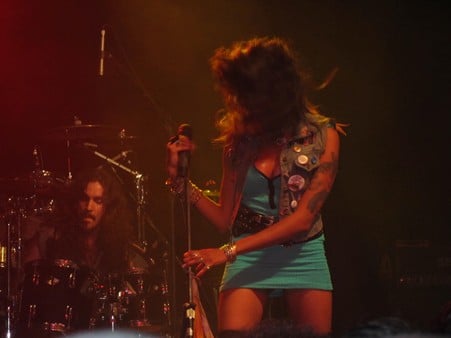 With their mantra of bringing heavy metal back, Steel Panther have been able to combine a lot of the elements of the ’80s glam metal scene first established by bands like Motley Crue and Poison while taking it to the next level in terms of silliness and debauchery. One listen to Steel Panther‘s songs tells you all you need to know about what direction that the band is taking. Song titles like “Community Property”, “Asian Hooker”, “17 Girls In A Row” and “Weenie Ride” confirm that Steel Panther are setting women back a few decades. However, most if not all women in the audience did not seem to mind, with about 15 of them or so making their way on stage to dance throughout the evening where they were often encouraged to take off their tops and in one case, make out together.

After the “In The Future” intro, which sounded very similar to Motley Crue‘s intro to their ‘Shout at the Devil’ CD, Steel Panther kicked off their set with “Supersonic Sex Machine” and “Tomorrow Night”. Then came the biggest surprise of the show to me. These guys, and particularly lead vocalist Michael Starr and guitarist Satchel, were absolutely hilarious. Not since seeing Dee Snider from Twisted Sister had I seen a frontman (or in this case, a frontman and guitarist) connect so well with an audience. After only two songs, each of the Steel Panther members were introduced to the audience. While that would usually not come off that well at most shows, given that the band had only played two songs, it worked very well in this case. This was also the audience’s (for those who had never seen Steel Panther live before) first taste of the backwards yet funny exchanges that Starr, Satchel and occasionally bassist Lexxi Foxx would deliver throughout the night. 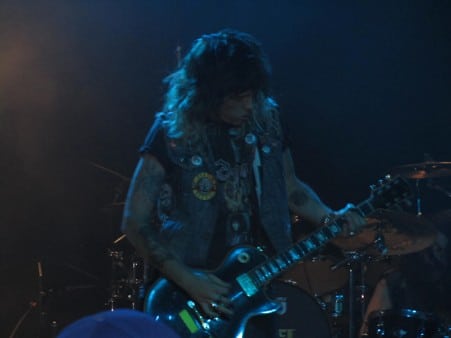 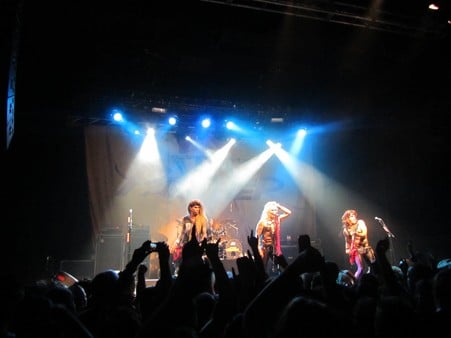 Borrowing heavily from the repertoire of Motley Crue‘s Tommy Lee, just about any woman on a guy’s shoulders in the general audience was “encouraged” to take their top off. Being loyal to one woman…. forget it. The band questioned why anyone would even bring their girlfriend to their show and promoted cheating on a guy’s girlfriend during their onstage banter. The dangers of drug use… forget it. The band, and particularly Satchel, shamelessly promoted drug use including cocaine and ecstasy. Chasing women… forget it. The band proudly boasted about their numerous sexual conquests and the advantages of being in a heavy metal band when it came to easily picking up women. Borderline racial comments… absolutely, and particularly towards Asian women with the band and particularly Foxx pointing out that Asian women had smaller eyes. And what about the lone ‘black guy’ that Satchel made reference to a number of times throughout the evening? While some people may read this and find it offensive, the reality is that Steel Panther‘s charm is to deliver their music in a tongue and cheek way while poking fun at themselves and their audience. What was a common occurrence throughout the show was the laughter and smiles from most in the audience as the band kept cracking jokes and simply making one ridiculous statement after another. 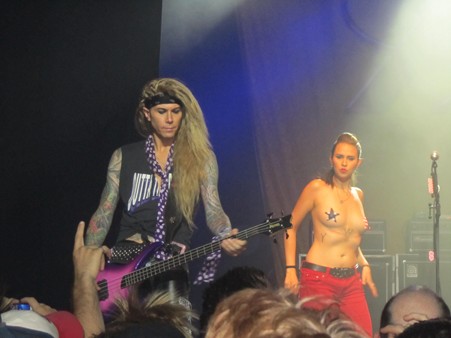 At the end of the day, no matter how funny Michael Starr, Satchel and Lexxi Foxx may be (drummer Stix Zadinia didn’t say anything), if Steel Panther didn’t have the songs to back up their show, all of the humor wouldn’t work. What makes Steel Panther‘s show work so well is that their songs are also catchy and really good. Both of their ‘Feel The Steel’ and ‘Balls Out’ CDs contain the same Poison meet Motley Crue type of material with over-the-top sexually charged lyrics and catchy choruses. Just about any song that Steel Panther played worked well live — even Satchel‘s guitar solo was entertaining with riffs from some of the band’s likely influences such as Metallica, Ozzy Osbourne, Black Sabbath, etc. Highlights for me were “Tomorrow Night”, “Turn Out The Lights” and “Eyes Of A Panther”.

The band closed out their show with two encores: “Death To All But Metal” and “17 Girls In A Row”. For good measure, after the show was over, lead vocalist Starr came out one last time to warn the audience that if they had drank too much (or taken too many drugs) and were going to drive a vehicle — they should make sure to stay awake by taking some cocaine…

From start to finish, Steel Panther kept the energy levels up and the humor (hopefully!) throughout the entire night. Awesome show… I can’t wait to see them again in concert. 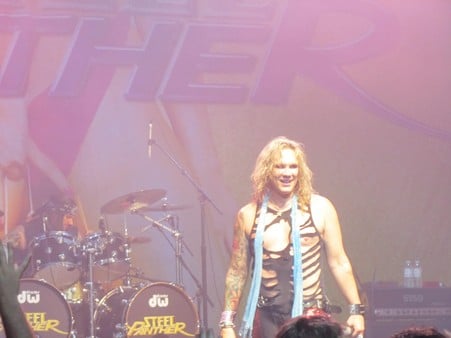 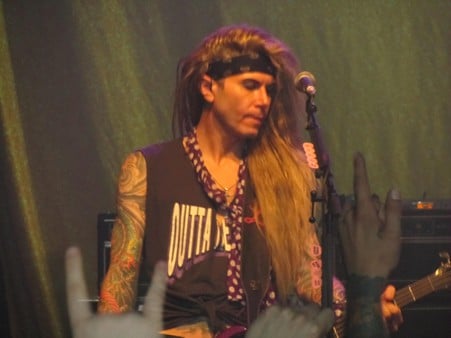