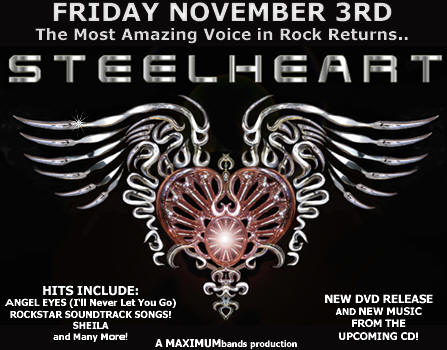 The good, the bad, the ugly. Yeah, the title of a movie but also an appropriate description for this particular review.

The good belongs in large quantities to Naked Beggars – half of Cinderella in Jeff LaBar and Eric Brittingham, a whole lot of kick ass with Inga Brittingham on vocals, Lisa Rav on drums and Kris Casamanto on guitar. This show, a little over an hour of in-your-face music, was the highlight of the evening and a very pleasant surprise. The band was in great form, playing tracks from their first two studio releases, Naked Beggars and Spit It Out, as well as some cuts from their upcoming third release. Very solid musicianship, great stage presence, great interaction with the crowd, over all a top-notch performance in a great club to party with the bands. The atmosphere was incredible and you could tell right off it was going to be a great night.

For anyone who even has a slight interest in sleaze rock from the 80s, you’re familiar with Cinderella and the talents of their resident guitarist Jeff LaBar and bassist Eric Brittingham. Needless to say, their talent carries over into Naked Beggars, this obviously isn’t something they are puttering around with, trying to fill time until the next Cinderella show. Eric‘s wife, Inga, is incredible on the mike and quite frankly easy on the eyes, too. The drummer, Lisa, a very unassuming, somewhat dainty form of a female, gave the impression of several heavyweights pounding the skins, an obvious statement that she was included in this band for her talent behind the kit first and foremost. Second guitarist Kris (or was it first?), has all the chops that Jeff sports, played a solid rhythm and blistering leads to compliment Jeff‘s efforts. Seeing the five play together on stage it was painfully obvious that this was a band first and not a couple of “stars” with some other guys helping fill in the spaces.

One of the highlights would be a four-song acoustical set, effectively breaking the show in half. Now, you can’t imagine an entire evening would pass with half the members of Cinderella on stage and not play a tune from one of their discs, would you? Of course not! An acoustic version of “Nobody’s Fool” grabbed the crowd by the balls and squeezed hard. Should anything bad happen to Tom Keifer (heaven forbid!), Inga could most definitely step in and fill his shoes. The Led Zeppelin hit “Going To California” followed and the sights of Jeff LaBar playing the mandolin will stay in my mind for quite some time.

Some bright guy in the realm of physics once stated that “for every action there must be an equal and opposite reaction.” Turns out he may be right. For as much as Naked Beggars claimed the good, Steelheart would have to have ended up with the bad.

Same stage, same crowd, just not the same excitement from their performance. Miljenko Matijevic said several times it has been 15 years since he’s hit the stage before a live crowd. I’ve spent 16 or 17 years wishing I could see Steelheart live on stage. I couldn’t help but think when their performance was over there should have been a few more years gone by and perhaps it would have been a little more memorable. There was a lot of good in their performance (the shredding of axe slinger Chris Risola, Mili‘s voice was spot-on to the recordings of year’s prior, and I couldn’t find a single time he half-assed a song or a note), but yet over all the impression I was left with was a downer. Apparently it was this show on this night that the band decided to try out a new microphone effect, effectively ruining a couple of good songs as they didn’t seem to have it dialed in right. And, to make matters worse, Mili spent more time looking at the technician back stage, trying to get his regular microphone potted up right, than he did singing to the crowd. And this was on the second night of consecutive shows in the same venue! Is it unreasonable to expect these problems to be ironed out the first night?

Lastly, and perhaps the biggest disappointment of all, was the blatant disregard to Steelheart‘s second album, Tangled In Reins. In my opinion, this was their strongest and heaviest album and yet not a single track off this record made it into their setlist this night. I mean come on! An encore had room for Led Zeppelin‘s “Immigrant Song” but there wasn’t the time or interest to touch the second album? Criminal, definitely criminal.

Naked Beggars stole the night, both on stage and after their show. All five of the band members made themselves available for meet and greet, pictures, story telling, the whole works. Their show was incredible and a definite must-see. Steelheart, well I’m glad to have had the chance to see them and settle my curiosity, but I wish it could have turned out a little bit different.

What’s that? Where’s the ugly? That distinction would have to go to the Florida Highway Patrol. On this night, speed did NOT kill… it just cost $185.