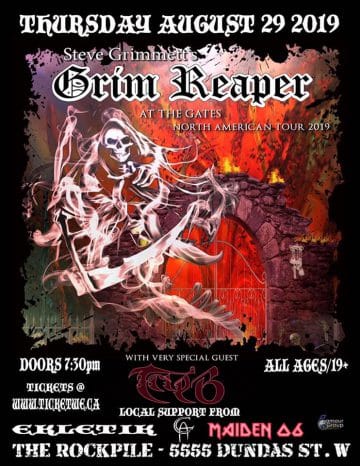 I know that artists and bands get frustrated with people “ripping off” their work by not purchasing and recording, or now these days, downloading, their music for free. However, this access to free music can sometimes lead to a new fan who ends up purchasing music or whatever else from the artist or band. I readily admit that I had never purchased a Grim Reaper album, t-shirt or anything else going into this concert. I first became aware of Grim Reaper like many Canadians back in the ’80s through their videos that were being played during the Power Hour on Much Music in Canada (MTV‘s equivalent in Canada). I can only recall ever seeing two videos — “Fear No Evil” and “Rock You To Hell” — but never purchasing any records from the band. Back then, it felt like there was so much new music to discover. Imagine discovering Iron Maiden for the first time in 1984 and realizing that they released four albums prior to Powerslave. Accordingly, I never purchased or even got “taped” any of the Grim Reaper records. However, I always loved those two aforementioned songs. In 2006, I stumbled upon the Sleaze Roxx website which reignited my love for ’80s hard rock and heavy metal. At around that time, a friend got me tuned to a website from which you could purchase and download albums at a relatively cheap price. For a couple of weeks, I was like a little kid in a candy shop. Two albums that I ended up getting in 2006 was Fear No Evil (1985) and Rock You To Hell (1987).

If I hadn’t obtained those two albums, I would have (stupidly) likely passed on the tour stop by Steve Grimmett’s Grim Reaper at The Rockpile in Toronto a couple of days ago. Why you may ask? Well, there are only so many concerts that I can attend. In any case, I have always enjoyed those two Grim Reaper albums and I was admittedly curious to see Grimmett perform after he unfortunately lost his right leg due to a nasty infection while touring South America more than 2.5 years ago. I had heard some of the new songs from Steve Grimmett’s Grim Reaper‘s album Walking In The Shadows and although they sounded pretty good, I had not gotten into the record. Given that it had been a while since I had heard either Fear No Evil or Rock You To Hell, I listened to those albums on the day of the concert and was surprised by how familiar that I was with the records. Obviously, I would likely know a lot more songs than I thought at the concert. That being said, my expectations were rather low going into the concert. 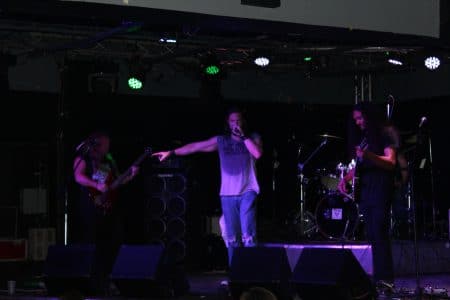 I arrived at The Rockpile about midway through Trip 6‘s opening set. The band put on a pretty good show. I was impressed that the group came all the way from Chicago, Illinois, USA to play the show. As it turns out, it appears that Trip 6 are one or perhaps the only official supporting act for Steve Grimmett’s Grim Reaper‘s At The Gates North American Tour. Although Trip 6‘s Facebook page indicates that there are five people in the band, I only saw four guys onstage. Singer Nate DeVan in particular was impressive and showed good stage presence. Drummer Vic Pedraza seemed to have a big personality and addressed the crowd on at least one occasion. There is no doubt that it’s difficult playing a “new market” and even more difficult when the majority of the crowd is seated pretty far from the stage but Trip 6 put on an energetic performance nonetheless. I can’t say that I was overly enamoured with the band’s music as it was probably a little heavier than what I usually listen to.

Trip 6 performing live at The Rockpile in Toronto, Ontario, Canada on August 29, 2019:

Before long, it was time for Steve Grimmett and his band to start their set. As previously mentioned, most of the crowd was seated pretty far from the stage when Trip 6 performed. While a few people including yours truly ventured close to the stage, a good chunk of the audience remained seated away from the stage before Steve Grimmett’s Grim Reaper took the stage. Grimmett subsequently gestured with one of his hands for the crowd to make their way to the stage and spoke up saying 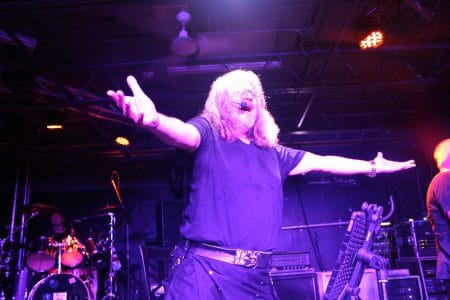 something in the vain that he didn’t perform (or didn’t like to perform) with the audience so far away. I thought that it was a real veteran move on Grimmett‘s part. I remember seeing Alice Cooper play the National Arts Centre in Ottawa, Ontario about 20 years ago and seeing the shock rocker a little frustrated with the crowd seated in their comfy seats while he and his band played the first five songs or so. This didn’t happen for Grimmett given that he took the bull by the horn and summoned the crowd to come up close to the stage even before he and his band launched into their first song.

I’ve got to say that I was very impressed with Grimmett‘s backing band. Guitarist Ian Nash (whom Grimmett declared to be his best friend), bassist Martin Trail and drummer Paul White were all really into the show and performed really well. Obviously, Grimmett was far from mobile but I was impressed with his stamina throughout the set (he only rested on a high stool for parts of a few songs) and his vocal chords are still there after all those years. At one point, Grimmett lifted what appears to be some form of Scottish kilt to reveal more of his prosthetic replacement for his right leg. It was a real reminder of the horrific experience that Grimmett went through two years ago but the man is definitely a fighter and survivor, and I felt a real sense that Grimmett had overcome this tragedy and was even triumphing by being back on stage doing what he presumably loves to do. 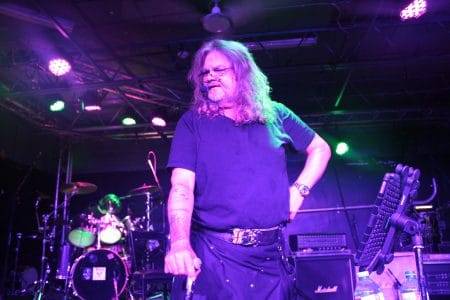 The setlist was obviously culled mainly from Grim Reaper‘s first three albums with five songs played from See You In Hell (1983), one from Fear No Evil (1985) and five from Rock You To Hell (1987). The remaining songs played were two from Waiting In The Shadows (2016), two from the upcoming new album At The Gates (2019) and two sensational covers — Hear ‘N Aid‘s “Stars” and Dio‘s “Don’t Talk To Strangers.” I liked that Grimmett provided the name of almost each song that was played (which made it easier for me to come up with the setlist below). I also enjoyed Grimmett‘s additional commentary such that he had been married four times (the man must be a romantic at heart) and that certain songs (such as I believe “The Show Must Go On”) had hardly ever been played live by Grim Reaper back in the day.

I knew that I would enjoy Grim Reaper‘s material from the first three albums but I was surprised by how much I enjoyed the newer material played by Grimmett and his band. So much that I was disappointed to hear that Grimmett did not have his new album At The Gates available for purchase and to take home at the show. Even though At The Gates will officially be released on October 11th, Steve Grimmett’s Grim Reaper had advertised that the new record would be available in CD format at their concerts leading up to the album release. Unfortunately, Grimmett advised that there was some sort of mix up with the record 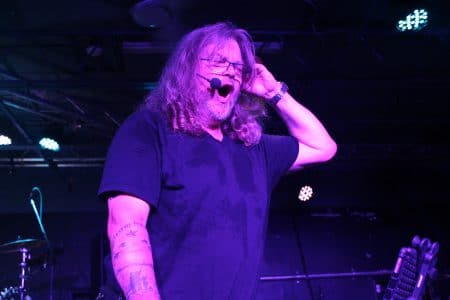 company so the CDs were not available at this time but that anyone who wanted to purchase the album could provide their name and they would make sure that the CDs went out to whomever wanted to purchase one. I decided to just wait for the release date but look forward to getting At The Gates when it’s eventually released.

I’ve been to quite a few concerts at The Rockpile over the years but I have to say that I was impressed with the “atmosphere” this time around. There were many younger people in the audience who were keen, perhaps quite intoxicated and really into it. That was great to see as new breed of fans is needed for ’80s hard rock and heavy metal to survive in the next 20 to 30 years. One fellow even brought a replica of the Stanley Cup (the trophy awarded to the hockey team that wins the National Hockey League playoffs on a yearly basis) and a bunch of people were drinking alcohol from the “Cup” just like the hockey players do during their celebration after winning it. It was kind of funny to see and even got Grimmett‘s attention. There was also a gentleman who apparently turned 47 years of age that night and Grimmett got the audience to sing him “Happy Birthday.” 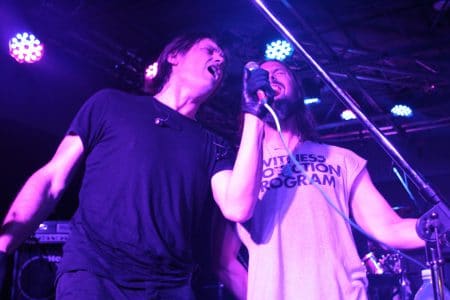 Some of the most interesting parts of the evening were the guest appearances throughout the evening. Usually, you expect to see some well known internationally or nationally known musicians up on stage as surprise guest performers but instead it was two local Toronto musicians that took turns “guesting” on various songs. Franc Potvin was up first playing guitar on the song “Rock Me ‘Till I Die.” I personally don’t know Potvin but have seem his name around via Facebook over the years. Clearly, Potvin could more than hold his own guitar playing wise and was quite popular as the crowd chanted “Frankie, Frankie.” The next guest artist was Mike McAvan (who I did not know at all but I got his name from another review of the show from Blast Toronto) who popped up on stage for the classic track “Fear No Evil.” McAvan looked a bit frustrated throughout the song as it did not appear that he was getting the sound that he wanted from his guitar while onstage. As it turns out, McAvan is apparently the current guitarist for Gypsy Rose.

The biggest surprise of the night came when Grimmett got three of the four Trip 6 band members (lead vocalist Nate DeVan, drummer Vic Pedraza and bassist Kevin Munster) along with Potvin and McAvan to come onstage for a fun cover of Hear 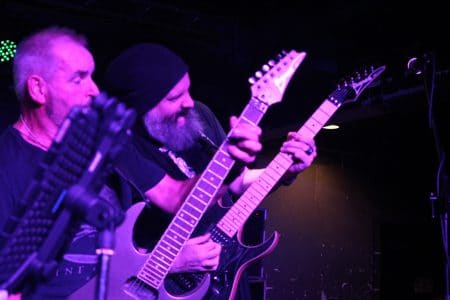 ‘N Aid‘s classic “Stars.” Pedraza took over the drum kit from White who handled some of the lead vocal parts along with DeVan and Grimmett. White has a good voice! That cover really seemed to get the audience riled up. It was also my first time ever hearing that song in a live setting and I loved it! After the song was over, White suggested to Grimmett that they also play their cover of Dio‘s classic “Don’t Talk To Strangers” (which has been a regular staple of the band’s set) so it strongly appears that Toronto got an extra song that night from Steve Grimmett’s Grim Reaper. Although I have not mentioned the band’s own original compositions, all of the songs played were really good and I was impressed at the depth of Grim Reaper‘s song repertoire. I was also surprised by how many songs that I knew this evening given how long it’s been since I had really listened to Grim Reaper.

Overall, the concert definitely exceeded my expectations, the atmosphere from the smaller but rabid crowd was excellent and Grim Reaper‘s arsenal of songs is definitely an underrated one. Shortly after the concert, I also purchased my first Grim 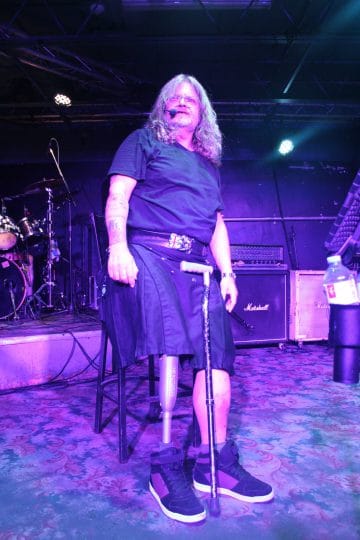 Reaper albums (online) and look forward to obtaining At The Gates whenever it’s released. Yes, it took more than 30 years but I am now a “paying” customer when it comes to Grim Reaper and I am glad and find it quite inspiring that Steve Grimmett is still touring despite the obvious crushing setback of losing his right leg.

Steve Grimmett’s Grim Reaper performing “See You In Hell” live at The Rockpile in Toronto, Ontario, Canada on August 29, 2019:

GRIM REAPER – SEE YOU IN HELL LIVE IN TORONTO 2019