Rock stars are artists… that seems pretty obvious. Apart from the guys who get into the business to score girls, creating something artistic is surely the main driving factor for a majority of musicians. And as artists come and go, a lot of them are also very eccentric, which to a lot of people is just another word for ‘out of their mind’, but to some it equals inspiration. ‘Genius often goes in pair with eccentrics’, and in the music business nobody embodies this better than Steve Vai. 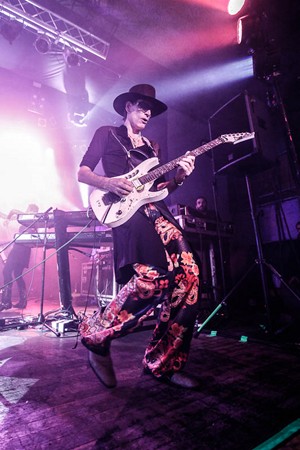 This guitar virtuoso went over the musical edge, in every possible way, to give his listeners one of the most bizarre, yet complex and innovative, guitar works ever. Some discount his music as just constant noodling, but there is so much more to Steve Vai than that. Considered one of the greats of modern rock guitar, Vai has played with many of rock’s heavyweights, whom we don’t even have to mention here.

However since then time has passed, records were released, and Vai is now very far removed from the days when he was a guitar playing magician — a sidekick backing up singers who made their mark with legendary bands and needed to uphold their status by hiring the most over-the-top and technically superior musicians available. Since those times Vai made a brand of himself both in the studio and live and he proved that at his recent concert in my hometown of Warsaw.

Surprises were, aside the unbelievable instrumental skills, a second factor that would define the show. The first one came at the very beginning, as the opening act was a mind blowing southern blues singer named Beverly McClellan, who showcased one of the strongest live voices I have ever heard (no exaggeration). I really encourage you to check her out on the web, or on Vai‘s recent album ‘The Story Of Light’, on which she handles vocals on some tracks.

After her set was over in came the main eventer — and he came in to blow the crowd away. Two things were made clear from the very beginning. First, Steve Vai is an absolute master of the guitar. He already passed the stage of shredding blistering solos and now wanders in the zones of ultra high and ultra low with very peculiar guitar sounds. But the fact that the man can play his instrument was no surprise, as he is known for it. The other thing that struck me was that he is undisputedly a being out of this world — moving on stage like a giant alien, a being from outer space who could do things with a guitar no earthling would ever be capable of.

Steve Vai was all over the place, and his music was also. The live set was a wild ride all the way throughout his repertoire, from the times of ‘Passion And Warfare’ to his latest excellent record ‘The Story Of Light’. A great thing about the show was Vai‘s contact with the audience. You could clearly say that it wasn’t a staged routine, but an actual interaction between a performer and his listeners (one of the photos here clearly proves that).

Steve also wasn’t above introducing his band, and he was armed with some killer musicians. The two that actually grabbed my attention was a female playing electronic harp, which added an unmistakable flavor to Vai‘s guitar driven songs, and the other was the drummer Jeremy Colson, who went as far as getting out from behind the kit, strapping himself to a portable drum kit and handling a conversation with a toy skull. It was a true example that drummers can be showmen if they just put in the effort.

Steve Vai was changing outfits almost as often as he changed guitars, and trust me that was pretty often, but the music always came first. The part of the gig that really showed that the Steve Vai band is genuine was when they invited two random people from the audience onstage and composed a short piece based on the guest’s ideas… just like that, from scratch.

All in all the show was long (about two hours and a bit), full of great music, great performances and killer visuals. One thing that stayed in my mind after this concert was that even though Steve Vai is a great performer that puts on an unmistakable show, the music plays the biggest part.