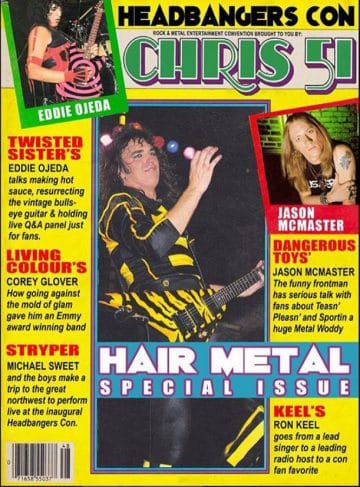 It’s been a few years (2012) since Stryper made their way to Portland, Oregon. Since that time, they’ve issued studio albums, Second Coming (2013), No More Hell To Pay (2013), Fallen (2015) and God Damn Evil (2018) which they’re currently in midst of the promotion cycle. Also to be noted that this is the first tour with new bass player Perry Richardson (formerly of FireHouse). The last time around, Stryper were booked to perform at The Aladdin Theater across town, which was very well attended. This time around, Stryper were at the Bossanova Ballroom, which is a bigger venue. My first thought was perhaps it was a tad ambitious for a glam metal act that is often maligned, not only by their contemporaries but by others within the various subgenres. In fact, as I geared up to see this show, there was a photo that was tweeted by Nergal from Behemoth mocking Stryper, holding a To Hell With The Devil LP with his thumb down and the caption “Not a good shopping day at Reckless Records in Chicago.” Not exactly the type of venom expected from a guy that recently beat cancer. Totally unwarranted. The response was pretty classy from the Stryper camp, as you’d expect, “How classy of him… at least he knows who we are.” 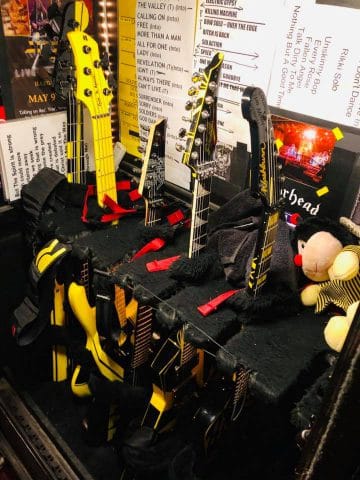 The show started a bit late, simply because the show was part of the first Headbanger’s Con, whose kickoff party was at the same venue with several of the weekend’s participants meeting the press and VIPs. There was an opener that started shortly after 9:00 pm. By that point, the venue was near, if not already at, capacity. Truth be told, I couldn’t make out much of the performance, as I was in the upper deck with the media and VIPs. He was performing solo with an acoustic guitar, which is ballsy to begin with. It was so incredibly loud from the various conversations that I heard very little of the performance.

First and foremost, guitarist Oz Fox was in tip top shape, following his health scare a few months ago. He didn’t miss a lick, note or vocal part. It was incredible. Secondly, the next question is how did bassist Perry Richardson fit with Robert Sweet’s drumming? It was a seamless transition. Richardson’s addition to Stryper might have made the band heavier. He plays the bass like a percussionist plays the drums. The set included a balance of new and old with the classics being the ones that got the audience’s best responses. How could they not? As Sweet mentioned during the show, those songs were from the band’s ‘glory days.’ “Calling On You,” “Free,” “Always There For You,” “In God We Trust” (with a heavier arrangement), “Soldiers Under Command” and the ballads “Honestly” and “Lady” were all brilliantly executed. The deep cut in the set was “All For One” which Sweet mentioned in my recent Sleaze Roxx interview with him, “The song I really like on that album (Against The Law) is “All For One” mainly because it has that ‘classic’ Stryper sound. We should have done more of that.”

Stryper did an amazing job on this performance! This is another good song of theirs. Take a look. I do not own this song or get any money from it. Thanks and…

This concert was amazing. Stryper killed it like they always do. Beautiful, this video gives me chills. This song and this band has gotten me through so much…

I only have two complaints. This should have been a 21+ show. There were too many toddlers, adolescent kids and teenagers for my taste, i.e. families. There was also a bit too much preamble between songs such as “What’s a visit to Portland without some Voodoo Doughnuts?” I kept thinking this could be a partial song. Things came to a close with one of the songs that has really grown on me from the new album God Damn Evil. The song is “Take It To The Cross.” It’s heavy, it’s thrash with a ‘black metal’ ferocity, but without the savage lyrical content. That was followed by a song that is separated by 32 years, “To Hell With The Devil” which brought the house down. As Sweet told Sleaze Roxx in October 2018, “We’ve been rehearsing that one. Our hopes are to add it to the setlist. We just haven’t’ done it yet. That’s a cool tune. We just wanted to do something a little different. We wanted to showcase a little ‘thrashier’ side of Stryper. Who knows? Maybe on the next album, we’ll do something like that or maybe even a little heavier?” I think “Take It To The Cross” has found its spot in the Stryper set prior to the closer “To Hell WIth The Devil.” It fits in like “Calling On You” and “Free.” It’s a match made in heaven.

Stryper performing “Take It To The Cross” and “To Hell With The Devil” live at Bossanova Ballroom in Portland, Oregon, USA on November 9, 2018: