STRYPER PUT ON ANOTHER SOLID PERFORMANCE AT THE ROCKPILE 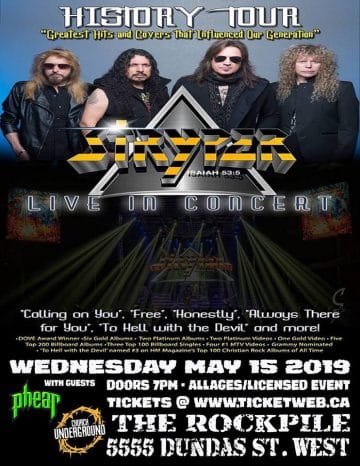 Stryper are one of those bands that I have absolutely no hesitation in purchasing a concert ticket for. The reason is simple. The Christian heavy metal rockers always deliver live. They also always deliver with their studio albums — at least the last three consisting of No More Hell To Pay (2013), Fallen (2015) and God Damn Evil (2018). 2009’s Murder By Pride wasn’t too shabby but the last three albums are definitely among the band’s best records. So much so that I was actually a little disappointed that Stryper‘s latest tour stop in Toronto would be their History Tour dubbed Greatest Hits and Covers That Influenced Our Generation. Don’t get me wrong though. I love to see Stryper perform live and although I had no hesitation in going to see them on their History Tour, I’d rather have them perform their own material than cover songs that I have likely heard many times over.

I am glad that I checked for the set times on this night given that I was shocked to see that Stryper were scheduled to be on stage at 9:30 pm. I think that’s the first time that a headlining band was playing that early at The Rockpile (as far as I know). In fact, the earliest that a headliner had previously played (that I know of) was when Stryper last performed there in 2016 when they started at around 10:00 pm from what I recall. Given that I only arrived a few minutes before Stryper were to go on, I knew that I would be far from the stage as Stryper always attract a massive crowd at The Rockpile, which only has a capacity of about 350 people. I ended up being about five to ten rows from the stage which seemed so far after being in the front row for my last two Rockpile shows (former AC/DC singer Dave Evans and ex-Iron Maiden frontman Blaze Bayley).

I was surprised to hear and see that Stryper were kicking their set off with one of their signature songs — “Soldiers Under Command — but I thought that it was a good move as it got people into their set in a big way right away. From there, it was a trip 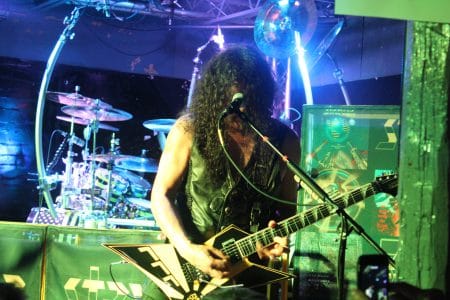 down memory lane with “Loving You” from the band’s debut album The Yellow And Black Attack, and the sing along friendly “Calling On You” and “Free” from To Hell With The Devil. It was great to see guitarist Oz Fox back in the line-up and he looked like he was really enjoying himself. Although Stryper frontman Michael Sweet addressed the audience quite a bit, I would have liked even more interaction from him with the crowd since he’s one of the best in that regard. “New” bassist (not so much anymore) Perry Richardson looked like he had been playing with the band for decades as he looked really comfortable on stage and while interacting with his bandmates from time to time. Drummer Robert Sweet was his usual steady self and seated sideways to the stage giving everyone a rather unique view of him when he is playing.

Although singer Michael Sweet has posted about some of the voice issues that he has been having subsequent to the band’s tour stop at The Rockpile, I didn’t really hear any problems with his voice on this night. It was funny hearing Michael Sweet advise the crowd that he didn’t know what to do with his hands once he put the guitar away to sing various cover songs. Funny enough, Michael Sweet‘s hands did look a little lost when Stryper played their string of cover songs. The three cover songs that I enjoyed the most were the ones that I had not heard Stryper play before and namely Judas Priest‘s “Heading Out To The Highway”, Queen‘s “We Will Rock You” and FireHouse‘s “All She Wrote.” I thought that the latter song was very fitting given that Stryper now have a former FireHouse band member in Perry Richardson in their line-up! Covers that I could have done without were the overplayed Ozzy Osbourne‘s “Crazy Train” and Black Sabbath‘s “Heaven And Hell.” Stryper did a good job with their renditions of those classics but I have heard those two songs in particular way too often to truly get excited to hear them again.

Stryper performing “Heading Out To The Highway” live at The Rockpile in Toronto, Ontario, Canada on May 15, 2019:

The only Canadian stop on their 2019 History Tour

As previously mentioned, I actually rather hear Stryper songs at a Stryper concert so I was happy that the band still played quite a few of its own material after playing seven cover songs. The highlight of the set for me turned out to be when Stryper played their newer heavier songs such as “Sorry” and “The Valley” from God Damn Evil, and “Yahmeh” from Fallen. I wish that Stryper would have played their new song “Take It To The Cross” with the growling vocals during the chorus as I have grown to like that song in the last year. It would have been interesting to see how they pulled off the growling vocals as well in a live setting. Stryper ended their set with their signature song “To Hell With The Devil.” I was hoping that the band would come out for at least one encore but it was not meant to be and deep down I knew the set was over when “To Hell With The Devil” was played.

Overall, I really enjoyed Stryper‘s concert (as usual) although I think that I would have enjoyed even more closer to the stage. I always enjoy going to Stryper concerts as it seems to be a different and more balanced crowd with people from all walks of life (such as more couples) compared to a typical heavy metal concert. One thing I know for sure, when Stryper come back to play in Toronto, I will be there once again! 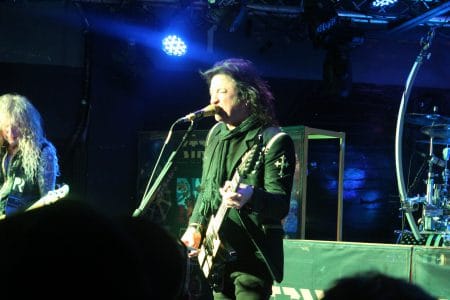 Stryper performing “To Hell With The Devil” live at The Rockpile in Toronto, Ontario, Canada on May 15, 2019: