Sweden Rock Fest, day 4 — the final day of this extraordinary festival. At noon, female rock singer Lee Aaron from Canada climbed up on the ‘Rock’ stage and began her show with “Powerline” and shook the sleep out of everyone’s eyes by playing a 75 minute set filled with quality pop-rock. After many years off the rock music circuit (she’s now married with children, and her husband is also drummer in her band) Lee Aaron‘s first ever appearance at Sweden Rock was a success as she performed such songs from the ’80s as “Hands On”, “Hot To Be Rocked”, a more alternative version of “Metal Queen” (which wasn’t that perfect) and the beautiful ballad “Barely Holding On”. Believe me, this lady looks almost the same as she did 25 years ago and her voice was smooth, rough and rocking. For Lee Aaron the trip to Sweden was a success and we’ll probably we get a new rock record from her very soon because that’s what fits her best (along with her powerful ballads). 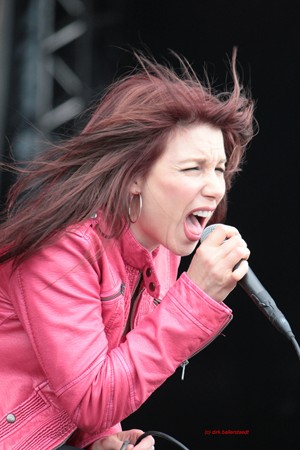 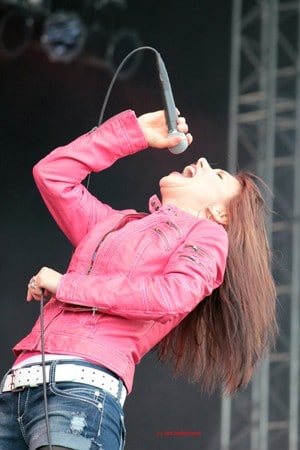 After Lee Aaron‘s triumphant comeback I took a break and walked around the entire complex and saw a lot of happy people having a late breakfast or an early beer. The sun was shining and the atmosphere was just fine — everyone was impressed with the festival and the Swedish people were excellent hosts, very helpful and friendly with everything.

Then it was time for another legendary band called Molly Hatchet. These southern rockers played a good show with tunes like “Been To Heaven, Been To Hell” and “Live Til I Die”, and while they were performing I switched over to Spock’s Beard — but to tell you the truth, I returned to Molly Hatchet and had a relaxing hour with the fine brand of hard rock they play. 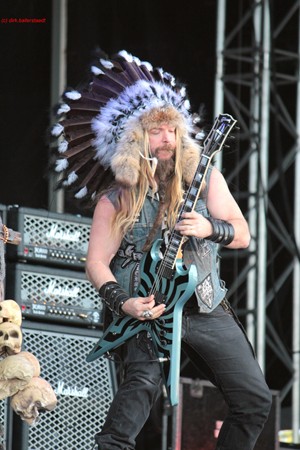 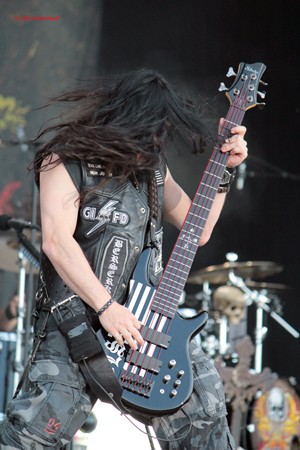 Then it was the Italian band Rhapsody Of Fire, with their double-bass drum power-metal, and songs such as “Dawn Of Victory”, “Holy Thunderforce” and “Unholy Warcry”, that rocked the late afternoon while we waited for another of the harder edged bands on this day — namely Black Label Society. Zakk Wylde is one of the greatest metal guitar players in the world, and along with his bandmates kick-started their show. Fans of harder biker-rock got their fill when the band performed such pearls as “Bleed For Me”, “Still Born”, “Fire It Up” and “Suicide Messiah”. Fans couldn’t do anything more than shake their hair while having a good time to the American metal with a southern touch. After a couple of songs I decided to walk to the ‘Zeppelin’ stage to have a dose of bluesy styled rock with a harder edge and watched the famous Walter Trout Band, whose leader Walter Trout is an animal on the guitar and displayed a thousand licks to kill your mind. Again, after a few songs, I headed back to Zakk Wylde and Black Label Society to watch them play their final songs of an excellent show. 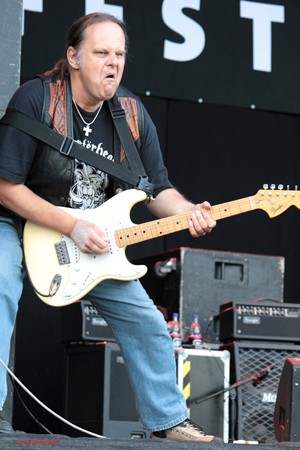 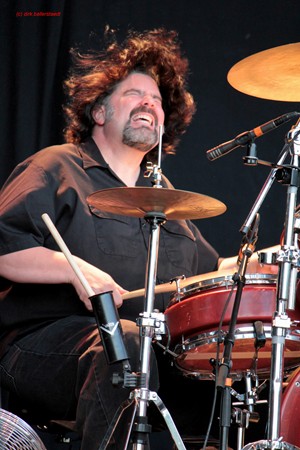 Then I had three bands on my radar, starting with Germany’s Rage who were doing an unplugged show. The musicians surrounding frontman Peavy Wagner played a very quiet and relaxing show, but I preferred to walk over to the ‘Sweden’ stage to see what the elder men of Hawkwind had to offer — and their psychedelic style of stoner/space-rock made me dream for a few minutes, but then I wanted to return to the ‘Rock’ stage to see the best of the evening, Scott Gorham and band mates known as Thin Lizzy. 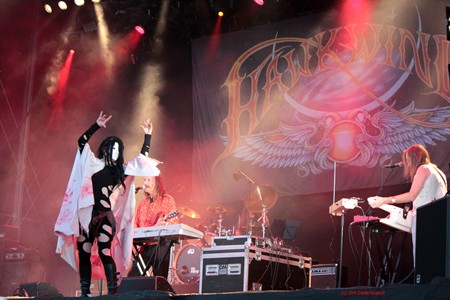 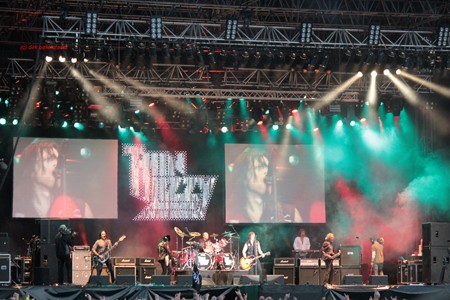 With powerful singer Ricky Warwick (formerly of The Almighty) and cohorts, it was an amazing show and the perfect introducing for the night’s headliner Ozzy Osbourne. This version of Thin Lizzy is a modern band, but plays all the classics we demand to hear like “Killer On The Loose”, “Emerald”, “Don’t Believe A Word”, “Black Rose”, “Dancing In The Moonlight”, “Rosaline”, “Whiskey In The Jar”, “Waiting For An Alibi”, “Ready To Rock” and “The Boys Are Back In Town”. Thin Lizzy aren’t the same without the iconic Phil Lynott, but with all the refreshed music it is a must to have this band back on the rock circuit and I really enjoyed them. 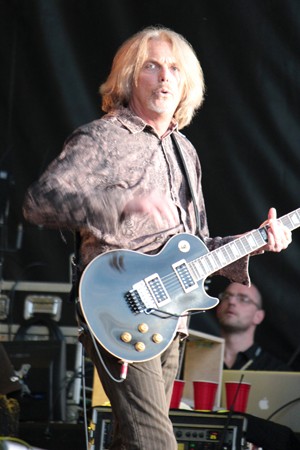 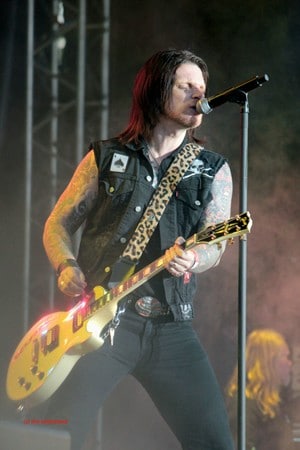 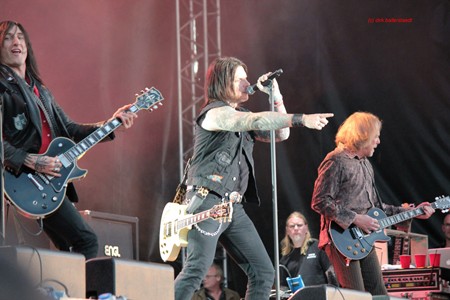 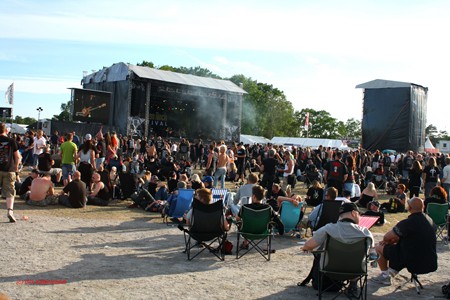 Thousands of the festival rockers headed then to the big ‘Festival’ stage one hour before Ozzy Osbourne‘s show was scheduled to start in order to get a good spot with the best view. Before Ozzy came on a bonfire was lit to declare the last show of this Festival was coming up, and Mikael Fassberg of Bonafide played a few notes on his guitar to celebrate the 20th anniversary of the Sweden Rock Festival.

Then the lights went out and the intro of “Carmina Burana” raised everyone’s expectations to the highest possible level. The intro stopped and Ozzy Osbourne ran on stage, picked up the microphone and talked to the audience. Crazy — no one else but Ozzy could start a show with a little chat before letting the music do the talking. “I Don’t Know” was the first song played before the Ozzy rollercoaster began picking up speed with songs like “Bark At The Moon”, “Crazy Train”, “Iron Man”, “Paranoid”, “Goodbye To Romance”, “Shot In The Dark” and “Mama I’m Coming Home”. Before the band played the song “Mr. Crowley” Ozzy grabbed a fire brigade’s hose and sprayed foam on the crew,photographers and fans in the first few rows. Ozzy went totally nuts, like a little boy at Toys R Us, and had himself a good laugh. 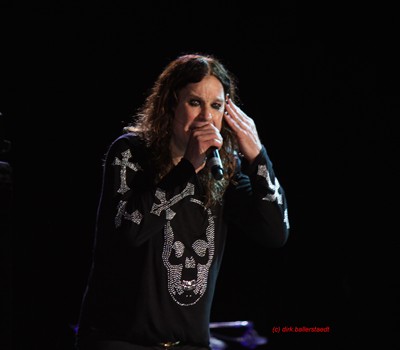 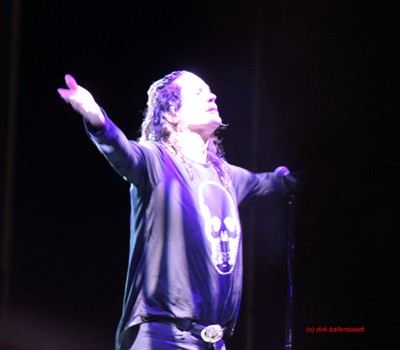 Newbie Gus G. is a good guitar player, and along with bassist Rob Nicholson, drummer Tommy Clufetos and keyboardist Adam Wakeman, did a great job — but it is Ozzy Osbourne who holds the flag and undeniably owns all glory, and that’s fine. The 62-year old rock legend walked the stage continuously, unable to stand still for even a few minutes, and was always on the prowl, clapping his hands and singing the best he can — Ozzy loves his crowd and is beloved by his devoted fans. With a tear in my eye I thought that the show was a bit too short, but maybe Ozzy is only fit for about 70 minutes (plus the solos of his bandmates), but after all it was a great show by the ‘OZZ’. 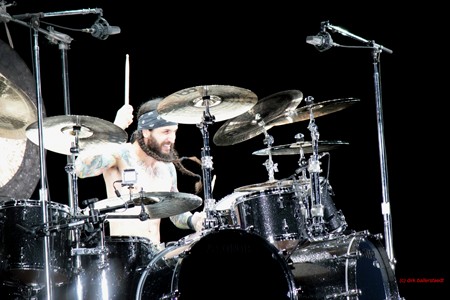 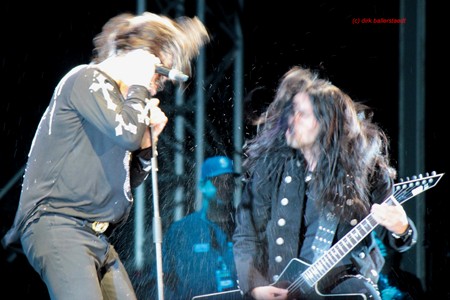 I remember seeing Ozzy Osbourne live for the very first time in 1986 (with the original Metallica) with Jake E. Lee on their US tour promoting the ‘Ultimate Sin’ album, and nothing has really changed since then. Ozzy is as crazy today as he was back then — he’s just a bit older, but continues to have that special fascination. Even if it seems like he’s a little sick from all the years of living life to the extreme, Ozzy is Ozzy… and will always be Ozzy. No matter what how old he gets, I don’t think he’ll be able to sit at home drinking tea and watering the flower garden — as long as he’s alive that man will crawl onto a stage, stand in the limelight and have a great fucking time. 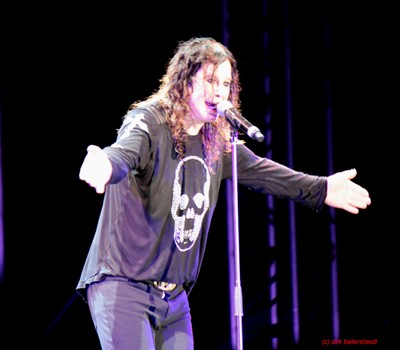 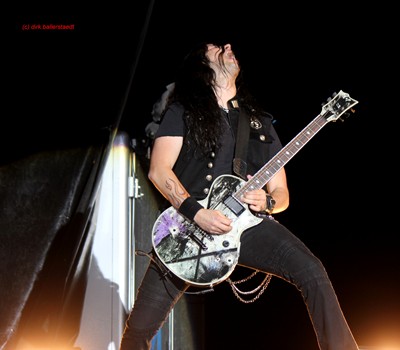 After Ozzy Osbourne‘s show many thousands of crazed people went peacefully to their cars, ground transportation (busses) or back to their tents to have memorable thoughts about the entire Sweden Rock weekend. It was very peaceful, four days of great music without any trouble or riots. I think the Swedish people are very cool, they had everything well organized and everything worked out great. There were enough stores to get some food and beverages, a lot of toilets, etc., to make everyone’s stay comfortable — it was just like premiere rock ‘n’ roll camping! Yes, that is what it was… rock ‘n’ roll camping with over 33,000 people who stayed peaceful for four days (and they didn’t smell that much).

And if you didn’t want to watch all of the bands from noon until late night, you could go to the beaches of the Baltic Sea which were only a twenty minute drive away, or go for some sightseeing in one of the smaller towns like Kristianstad, or even go walking in the wonderful forests near the festival area. You could bring your kids too, because I have never seen so many children at a ‘rock camp’ like this before — from babies to teenies, the next generation of metal fans has been infected. 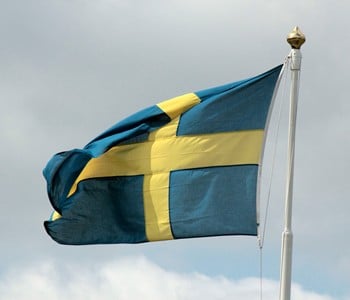 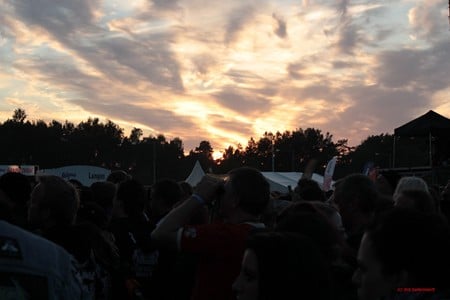 After all the power and electricty, the hundreds of helping stage hands, serving people and production staff, after all the tons of rubbish (which was very quickly cleaned up by the way), and after all that had to be done to create Sweden Rock… it became the best organized, and friendliest, festival I ever have experienced. The rock bands were all great (the ones I saw)… okay, I couldn’t made it to bands like The Hooters, Kansas, Styx and some others, but I think I banged my head to the best choices. The elder rockers like Ozzy Osbourne, David Coverdale and Rob Halford were awesome, and some of the big surprises for me were Mr. Big, Steelheart and Rob Zombie.

If you plan to come to the beautiful country of Sweden next year, the annual Sweden Rock Festival will take place June 6-9, 2012 — so you’d better get your stuff together. Maybe we’ll see you there… at the Sweden Rock 2012 — I would be honored!