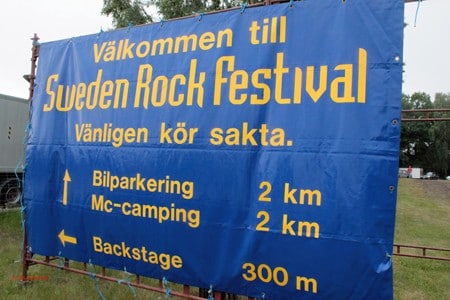 It took me three hours to drive to the north coast of eastern Germany and then onto Rugen Island to catch the ferry at Sassnitz harbour. From there I ferried across the Baltic Sea and landed in the Swedish town of Trelleborg after four hours on the water. Then I had to drive another two hours along the southern coast of Sweden to finally arrive in Solvesborg — the city which hosts the annual world famous spectacle called Sweden Rock Festival. Outside Solvesborg is a big area where five huge stages for rock bands stand — including countless stores for food and drinks, some shirt and record merchandising stores, a wide camping space, a fairground, and other stuff to discover, all embedded in the beautiful and peaceful nature close to the beach. 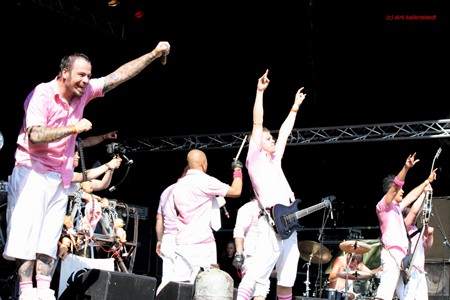 Every year the Sweden Rock Festival is held in June when it’s not too warm and not too cold — almost perfect when it doesn’t rain. It is a four day outdoor event that attracts some of the finest acts and biggest names in hard rock and heavy metal. This year famous bands such as Judas Priest, Whitesnake, Ozzy Osbourne, Joan Jett, Buckcherry, The Cult, Queensryche, Mr. Big, Stryper, Rhino Bucket, CrashDiet, Rob Zombie, Helloween, Styx, Kansas, Thin Lizzy, Steelheart and Black Label Society (to name a few) came to the festival and gave the international crowd (people come from as far away as South America, Japan, Europe and USA) what they wanted — the best festival Europe has to offer, and probably one of the best in the entire world. The festival was very well organized and peaceful — and surprising to me was that many families brought their younger kids with them to rock together. Over 33,000 fans could party every day and night at the site with enough space to enjoy the festivities without feeling crowded. Even the ground transportation, parking, etc. was planned out well, making for a wonderful four days of music. 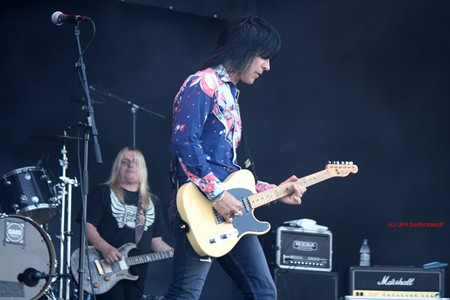 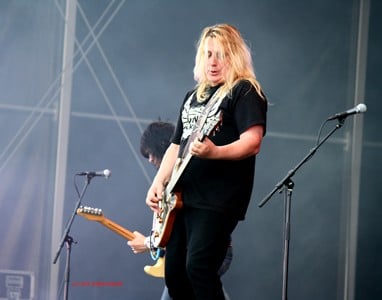 The gates opened at 3PM on the first day, a Wednesday afternoon, and the area was not overcrowded. It was more a relaxed warm-up until the very first band, Seventribe, took to the ‘Zeppelin Stage’. Seventribe earned their opening slot by winning a contest of unsigned bands and these eight guys, and their pony-headed mascot, made a good appearance with so called ‘riot metal’ which reminded me of Slipknot. The band was a lot of fun to watch and their sound was cool with eight guys playing instruments, or singing, one after the one. It was very cool, and a perfect opening. 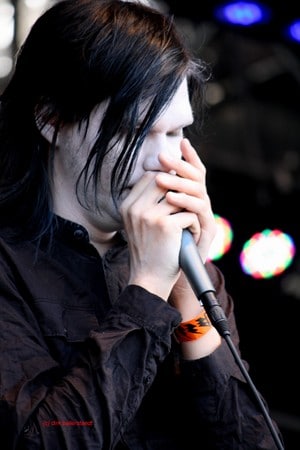 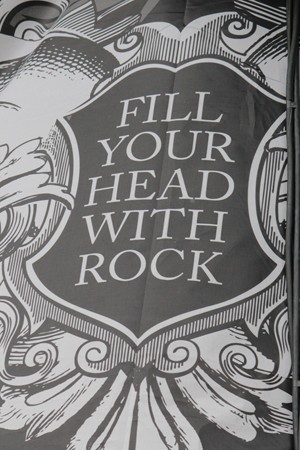 Then the folks wandered from the ‘Zeppelin Stage’ to the ‘Sweden Stage’ (remember, there are five stages on the grounds named ‘Zeppelin’, ‘Sweden’, ‘Rock’, ‘Festival’ and the smaller ‘Rockklassiker’) to give a well known band a warm welcome — Rhino Bucket from Los Angeles, California. Singer Georg Dolivo, guitarist Brian Forsythe (of Kix fame), bassist Reeve Downes and new drummer Michael Licata fired up a typical Rhino Bucket set with all the standards from their 1990 debut up to their current output ‘Who’s Got Mine’. It was relaxed hard rock played by four professionals who didn’t spend too much time in the make-up chair — unlike the stylish Swedish act CrashDiet who followed them onstage, a band who have looks that kill and performed with a glam styled stage design including pyro, lights and a razor-sharp sound. 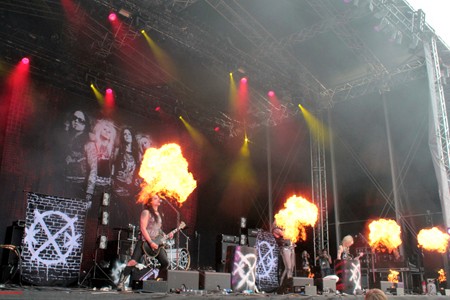 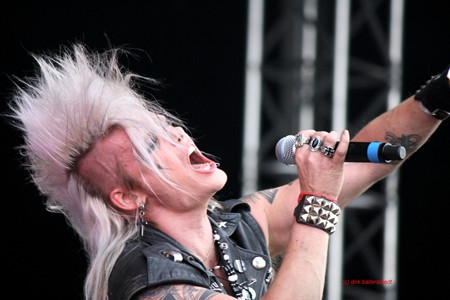 But in between those two different bands I walked over to the ‘Rockklassiker Stage’ and had the joy to discover another Swedish group called The Dead And Living. They did an unplugged set of what they call ‘Vampire Country Music’, a combination of Nick Cave, goth, punk and a bit of country with very deep and fascinating lead vocals with the attitude of a Tim Burton film. I think that explanation captures their sound pretty close and I must say that The Dead And Living got me into a good mood and I wanted to hear a bit more.

While a band like Rhino Bucket draw people of the age of thirty and beyond, CrashDiet definitely brought in the teenagers, the young rebels, and the young at heart. They put on a good show with the best songs from their three full-length albums, each that contained a different vocalist. Their first singer Dave Lepard committed suicide, then Olliver Twisted left to form Reckless Love, and now it’s up to new vocalist Simon Cruz (who looks a bit punky) to steer the CrashDiet ship back to success. Playing songs from ‘Rest In Sleaze’, ‘The Unattractive Revolution’ and their newest release ‘Generation Wild’ and combining them with a wild live show, give everyone hope that this four piece’s future will be bright. The crowd went nuts for CrashDiet and that’s what rock ‘n’ roll is all about — having fun with the music you love. For me CrashDiet has a lot of potential, but they need a few more the hits like the killer tune “Falling Rain” (my absolute favorite) to make a bigger splash into the international market. 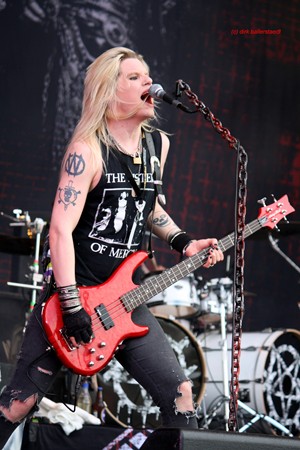 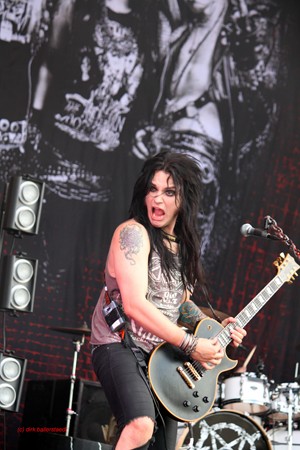 After the sleaze and glam potpourri I needed to take a little break and then a band came on called Five Horse Johnson, a stoner-rock band from Atlanta, Georgia, USA. They did a very charming and laid back show with a lot of blues in their songs and gave me the rest I needed so bad. With six records (since 1996) in their catalogue, Five Horse Johnson had a bunch of tunes to choose from and were one of the biggest surprises (to me) at Sweden Rock — and there were more surprises to come. I think that bands from the southern United States always enrich a festival with their kind of music. 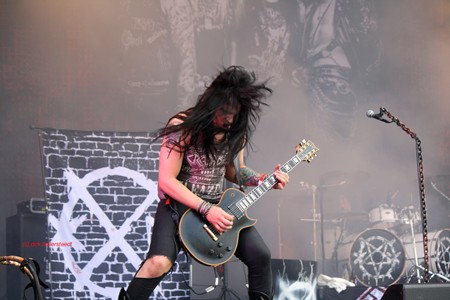 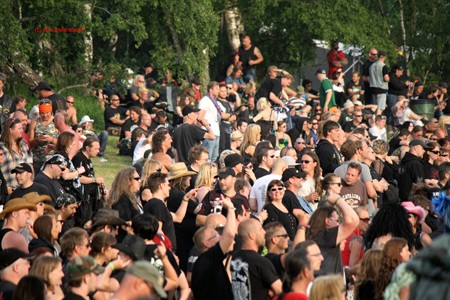 Then there was an announced press conference with Joan Jett, and journalists from all over the world waited almost an hour (rock star behaviour maybe?) to see the fine lady from America that is known for her success in the very, very early years of The Runaways and then as a solo artist. I decided not to wait that long because, in my opinion, press conferences are usually only for politicians — if a musician won’t give single interviews in person, maybe they don’t have anything to say? And you can usually see it in their faces that they don’t like press conferences at all, so why bother? I was excited to see Joan Jett though as I had never seen her live before — she doesn’t perform that often outside North America, and I hoped to be treated to a good show the next day. 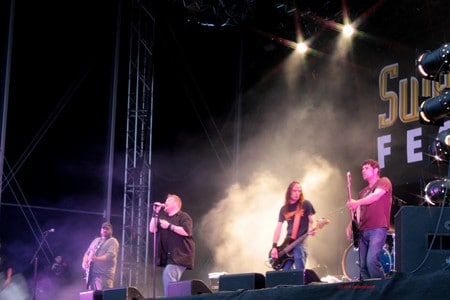 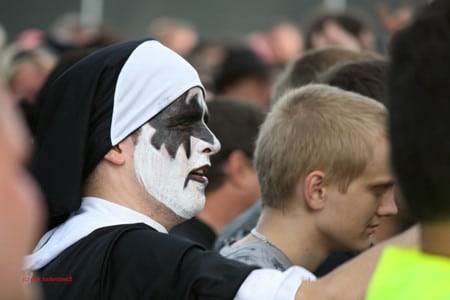 After that I got something to eat and drink before Swedish glam/metal band Hardcore Superstar hit the stage and performed an exciting set during the rain that had come and made it very tough to get motivated to stay around. It rained cats and dogs and only the die-hard fans stuck around — but who cares if your hair gets wet when the music is this good? Besides, if you’re going to an outdoor festival you have to expect rain as much as sunshine.The sun finally broke through, and the late sunshine mixed with Hardcore Superstar‘s stage party. Hardcore Superstar is a band who is capable of big things if their brand of hard glam metal with a commercial edge can find its way onto radio or TV — because they are absolutely melodic as well as heavy, a sound that many kids (and older people) demand.

It was a great finale, even with the bad rain. I then drove back to my Bed & Breakfast, fell down on bed and got some sleep. Day 2 of the Sweden Rock Festival was quickly coming up, and with it many more highlights… 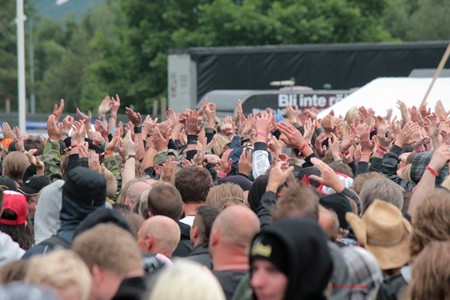 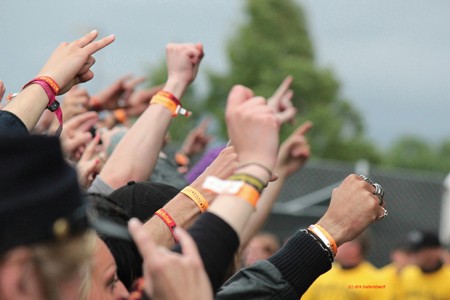