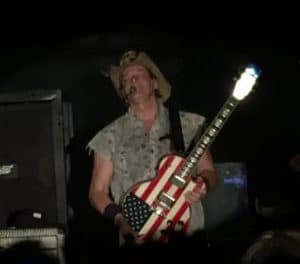 Ted Nugent first busted onto the music scene with Amboy Dukes. Soon after that, he decided to start his own solo band, and that turned out to be a good thing for him. He has been in the public eye since 1963 and he is still putting out music and touring his ass off to this day.

This was going to be my first time ever seeing “Uncle Ted” perform live, so I didn’t know what to expect from his live show. Once we arrived to the venue, The Medina Ballroom in Medina, Minnesota, I was pleasantly surprised to see how many cars were in the parking lot. I was happy to see that Nugent still had a lot of followers that would pay their hard earned money to see him play live. I would have to say that the venue was damn near sold out and the crowd was ready for a good ol’ rock n’ roll show.

The opening band, Cole Allen Band, is a local band from Minneapolis, Minnesota. It is a three piece band that loves to play blues-influenced rock. Cole Allen is a phenomenal guitar player and vocalist. Even though this type of music is really not my cup of tea, I was blown away at how good he was on the guitar. He played a lot of newer tracks from his recently released album and a couple of covers as well to keep the crowd entertained. 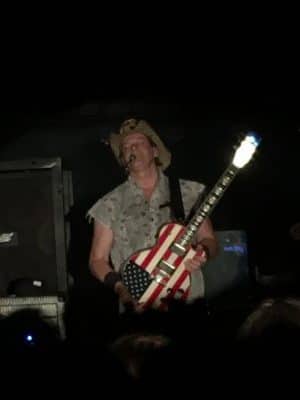 For anyone who gets offended easily, a democrat, or a vegan; I am not sure a Ted Nugent show is something you should be going too. Nugent is one who loves to speak his mind about his political views and how much he loves to hunt and eat the shit out of what he kills. The show kicked off with the band coming out on stage — Greg Smith on bass and Jason Hartless on drums — and then the Motor City Madman did a great rendition of the “Star-Spangled Banner” on his guitar. Once he finished with that, they went right into “Gonzo.” This got the crowd ready for a night of fun filled music and banter from “Uncle Ted.” Next song was the fan favorite “Free-For-All,” and this sounded better live than the studio version. Nugent was sounding great on the vocals and he was just killing it on the guitar. One thing that is for sure, is that Nugent loves the USA and loves all of our troops. He dedicated the next song,“Snakeskin Cowboys” to all of our troops who are fighting to keep everything that the USA stands for.

Nugent does a fantastic job keeping the crowd entertained between songs and also makes them feel that they are part of the show. He was interacting with the crowd between all the songs, and during one of those times, he mentioned that he did the calculations and that this show was his 6,534th show (don’t quote me on that as I 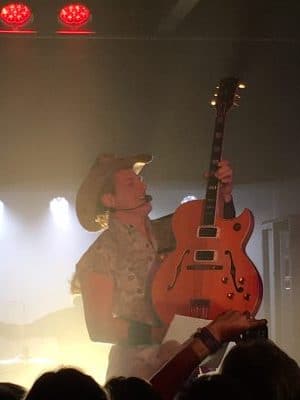 was trying to remember the number as I wrote it down.) After that, he mentioned that he did write one country song and asked the crowd if they wanted to hear it? The crowd didn’t seem too happy to hear a country song, but when he announced it was “Wang Dang Sweet Pongtang,” the crowd went nuts! Throughout the show, Nugent kept on telling the crowd to “never forget where you come from” as it is crucial to remember how important the past is as it makes you the person you are today. With that, he wanted people to know what music inspired him and the band started a blues jam and then started to play “Hey! Bo Diddley/Johnny B. Goode.” The crowd was loving it and those covers sounded really good. Ted Nugent is known to be a good guitar player, but watching him live shows how amazing he really is.

Nugent took a little break from singing vocals the night, so Smith took over on “Stormtroopin’” and the song written by Derek St. Holmes — “Hey Baby.” Smith did an outstanding job handling the vocal duties on these two tracks.

One of the stories that “Uncle Ted” told the crowd was about his first hunting experience with his dad and a friend of his, and how the song inspired him to write 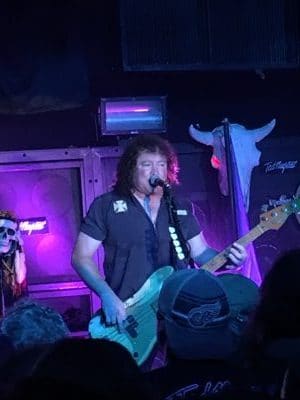 (another fan favorite) the song “Fred Bear.” The crowd went crazy for this song as I feel there were a lot of hunters in the room. When the song was done, he brought out his 1962 guitar that he likes to call “Blackie.” He said she is a crazy bitch that can play the sexiest lick of all time — “Cat Scratch Fever.” “Blackie” also played one of the most famous guitar riffs of all time — “Stranglehold.” By this time the crowd was locked in with the band and everyone was having a great time.

The encore for the night was another classic — “Great White Buffalo.” What a great song to end a great night of live music. Nugent also threw in a small part of the “Star-Spangled Banner” again. I will admit, I didn’t know what to expect of this show and wasn’t sure if I would enjoy the whole thing as I am not all that familiar with Ted Nugent‘s catalog. I loved every minute of his show and I will make sure to see him again next time he comes to town. One thing that I was disappointed in is that I had to take photos from the soundboard, and since I don’t have the best camera with a zoom lens, I didn’t get the best pictures. I did get some great pictures from Joe Marcella who took them from his phone, so I want to thank him for those.

Nugent also made me wish that most singers and guitar players used the wireless headset microphone so they can run around the stage and just not stand in one place while they had to sign. Nugent also had a few things to say about the current candidates that are running for President (I will leave them out of this review as I don’t want to offend anyone), and he said if we don’t get it right this time, he will be running for President for the next election. He will get my vote if he decides to run. 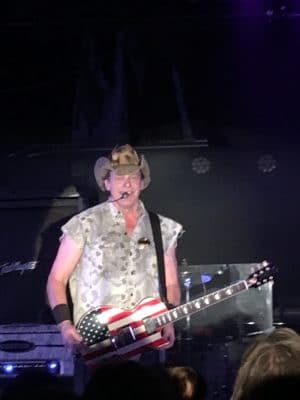