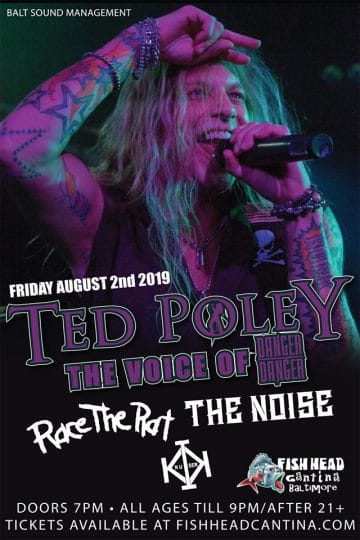 Rock n’ roll frontman Ted Poley first rose to fame with Danger Danger in the late eighties. The band saw international success following the release of the hit singles “Naughty Naughty” and “Bang Bang” from their debut album in 1989. Dodging the cliché of the dreaded “sophomore slump”, they followed up that record with the fantastic Screw It! record in 1991. That album promptly quelled any notion that Danger Danger were just another flash in the pan. But by the early nineties, the musical tide in the U.S. was beginning to shift in favor of alternative / grunge rock and many hard rock bands were seemingly swept under the rug by their respective record labels; the very same record companies that had been pushing those same bands only years prior. Danger Danger were unfortunately one of many acts that seemed to fall victim to the changing formats of radio and MTV.

Prior to the release of their phenomenal third album Cockroach, Poley and Danger Danger parted ways and the album remained shelved for many years. Not one to sit idle, he regrouped with a brand new band called Bone Machine and they released their debut album Dogs in 1994. In the years that followed, Ted went on to a prolific solo career. He’s been involved with a myriad of musical projects ever since — Liberty N’ Justice, Melodica, Degreed and Tokyo Motor Fist among them. In 2004, Ted Poley reunited with Danger Danger. Since then, they’ve released a new studio album and continue to play sporadic shows together to the delight of their fans. Simply put, the man just does not stop rocking.

In between recording sessions for the much-anticipated new album from Tokyo Motor Fist, Poley has been managing to sneak in a few pop-up summer concert dates here and there. I had the opportunity to catch one of those shows when Ted made his return to Maryland for a performance at the Fish Head Cantina in Halethorpe on August 2nd. And anywhere Ted goes, a party is sure to follow. 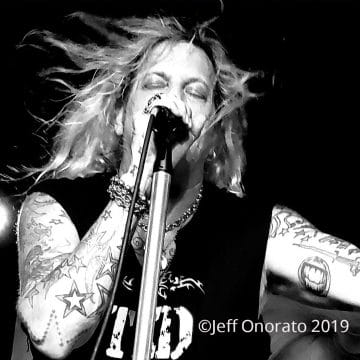 Two Baltimore-area bands, Kruiser and The Noise opened up the show. Both did a terrific job of getting the crowd pumped up for Ted to hit the stage. Race The Rat were originally on the bill as well, but from what I understand they unfortunately had to cancel their performance at the last minute. Kicking off the show in high gear, Ted hit the stage full throttle as opening number “Horny S.O.B.” barreled out of the PA system. And what a welcome sound it was. Screw It! is my favorite Danger Danger album, and I think this was a great choice to start the show with since it’s a heavier song that will get your head banging and horns in the air. It was cool to see the record represented in a set that consisted of some Danger Danger hits, a Bone Machine gem, and a few deep cuts that you’ll most likely only hear at a Ted Poley solo performance.

Speaking of deep tracks, the first surprise of the setlist for me was when the Cockroach album reared its head. The album was represented by not just one, but two songs that evening. The first of those was “Shot of Love.” Second only to Screw It!, Cockroach is possibly my favorite Danger Danger album of all-time. Fortunately, both albums were included in the set. It’s almost a no-brainer that Ted would perform a few songs from the popular Screw It! release, but that’s not necessarily the case with Cockroach. Both albums really are fantastic and showcase what I consider masterful songwriting, musicianship and production. If you’ve never heard them, I highly recommend picking up or downloading both. 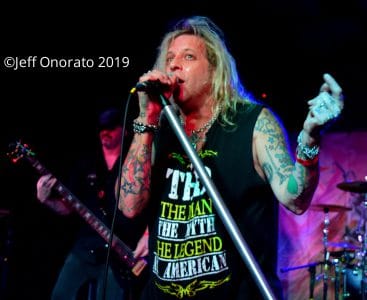 Ted mentioned in between songs that he wanted to include material in his show that fans don’t often get to hear when Danger Danger perform, and he certainly did just that. “Afraid of Love” appeared a bit later in the show, and I honestly can’t recall ever hearing Danger Danger play a song from Cockroach. As a fan, it was very cool to hear these songs played live. With so much musical ground to cover, hearing “Let’s Start Something” from Beyond The Fade was just the icing on the cake.

Having just attended a Danger Danger performance in recent months, I was curious how the D2 material would sound when performed by Ted’s solo band in comparison to the actual band that wrote and recorded the songs. Since club shows are almost always going to sound different sonically than music blaring from an arena PA, I tried to factor in that variable when forming my opinion. Guitarist Steve Mazza and the rest of Poley’s solo band were absolutely killer and delivered their renditions flawlessly, despite what seemed like 100% humidity on the night of the show. I really have to give credit to the guys for hammering out the songs with great accuracy in light of the high temperature and steamy conditions. The songs could not have sounded more faithful to the originals. 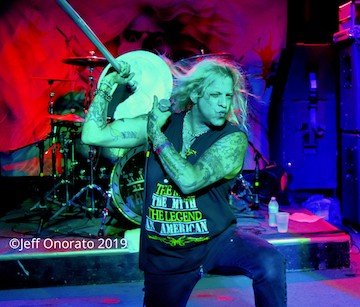 I know when I go to a Ted Poley or Danger Danger concert, I definitely want to hear the great stuff from their self-titled album such as “Naughty Naughty”, “Bang Bang” and “Don’t Walk Away.” They were all played and then some! Ted and his band even started off “Bang Bang” with the gang-vocal chant that appears on the recorded version of the track, as opposed to just kicking it with that familiar riff to begin the song. As he belted out “It was a warm night on the south side of town”, I couldn’t help but think how befitting those lyrics actually were. The concert side of Fish Head Cantina is an open-air venue with patio and outdoor seating surrounded by a wooded perimeter. It was beyond muggy on the night of this show in early August. When you factor in with hot stage lights beaming down, belting out song after song can be quite an endeavor. Not to mention keeping a guitar in tune. Ted and his band soldiered through the heat and just kept cranking out the tunes like true professionals.

Ted Poley is one of those rare frontmen that can fully engage an audience and make them feel like they are part of the show. So much so that when he spotted a fan in the audience singing all of the lyrics to the songs, he asked his name from the stage. Ted went on to invite Brandon on stage to help him sing one of Danger Danger’s most recognizable tunes — “Naughty Naughty.” It 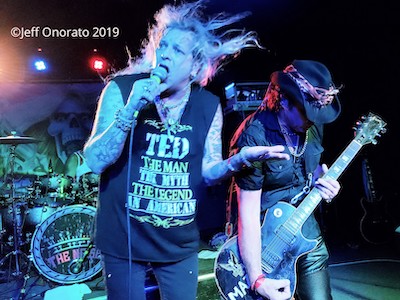 reminded me of the movie Rock Star when Mark Wahlberg passes the microphone to a fan in the audience. It’s something that I’ve never seen at a concert and I can’t even imagine how thrilled Brandon must have been to be on stage singing. How many rock stars can you think of that do that? Very cool Ted!

The band played a special encore — Ozzy Osbourne’s hit “Crazy Train” — which Ted introduced by saying “all aboard.” That was like lighting a stick of dynamite for the wild response that the crowd gave to Poley’s awesome version of the 1980 classic. Ted wrapped up his show by reminding the audience to “take care of the animals.” It’s commendable when any artist uses their platform for a good cause, which Ted does in spades. I think it really says something about an artist when fans still flock to your shows 30 years after your first album hit the streets. Ted always brings a high energy performance to the stage and seems to have a genuine enthusiasm for the music he’s playing while keeping things spontaneous and fun. I can’t think of too many performers that actually go out into the audience to sing and high-five their fans during a show. He does this all without missing a note and really is the consummate rock 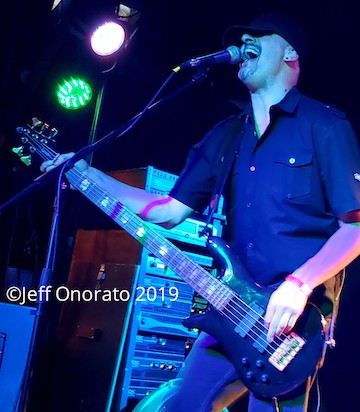 n’ roll entertainer. If you ever have an opportunity to catch Ted on his own or with Danger Danger, don’t miss it.

Trivia question: Several of the songs on Danger Danger’s Cockroach record also appear on another album of theirs. Can you name the album? A few of them actually have different titles on this release. No cheating!